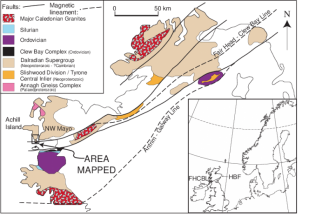 Achill is characterized by its large expanses of blanket bog & peatlands.  Peatlands are recognized as one of the unique features of Achill’s heritage.  Bog or peat is largely made up of water with its solid matter consisting of partly decayed plant remains.  Blanket peatlands have formed over thousands of years, only occurring in areas where there is a high annual rainfall i.e.  more than one hundred & twenty-five mm.  The peatlands of Achill that sweep from the mountains to the sea & coast sustain unique communities of plant or animal life. Plants like purple moor grass (Milinia caerulea ), ling heather (Calluna vulgrais ), sphagnum moss (Sphagnum) dominate the surface of the bog.  Bog cotton (Eripphorum angustifolium ), bog asphodel (Narthecium ossifragum ), cross-leaved heath (Erical tetralix) also bell heather (Erica cineria ) provide pockets of colour with black bog rush (Schoenus nigricans ) also white beak – sedge (Rhynchospora alba ) are also typical.  Insectivorous plants such as sundew (Drosera rotundifolia ), butterwort (Pinguicula vulgrais ) also bladderwort (Utricularia spp.) adapt to the nutrient-poor environment by traps plus digesting insects to gain extra nutrients.  Bog myrtle (Myrica gale ) is a low growing shrub with a distinctive aroma, it is commonly found at the lower altitudes.  Irish heath (Erical hivernica ) is a rare heather that only occurs in north-west Mayo, Spain & Portugal.  This heath blooms on the Curran peninsula &  in early spring at the back of Croughan.  Other rare plants  plentiful in Achill include St. Patrick’s cabbage (Saxifraga spathularis ), dwarf willow (Salix herbacea ), bearberry (Arctostaphylos uva-urs i) & a species of eyebright (Oxyria digna ) that is specific to Croughan. [i]

Machair or Irish ‘machaire‘  means a plain stretch of level ground is the name given to coastal grassland on a sandy substrate.  Within Ireland machair is only found in the north – west of the country. (also in north-west Scotland )  Machair is afforded special protection in a priority habitat from the European Union.  Machair developed following the last ice age due to several factors such as the high wind velocities also farm grazing.  On Achill island machair is located in several sites with the best examples in Keel, Dugort also the Valley.  Early to mid-June the machairs produce a blaze of colour with flowers such as wild thyme, (Thymus praecox ), daisy (Bellis perennis ), birds foot trefoil (Lotus corniculatus ) & lady’s strawbed (Carex. ) Mosses (Sphagnum ) with liverwort are well represented in this habitat.  One of the more important species found in this habitat is ‘petalwort ‘ a rare liverwort listed on Annex II also Annex IV of the European Habitat Directive. [ii]

Achill Island’s basement rocks also the Curraun Peninsula are the oldest within Ireland.  They were formed over six hundred million years ago during the pre-Cambrian period.  The rocks consisted primarily of schist, gness also quartzite.  The two largest mountain peaks of Slievemore at six hundred & seventy – two metres & Croghan at six hundred & sixty-eight metres during the last glaciation of Ireland i.e. the Midlandian stood out as Nunataks.  Lough Corrymore is a fine example of a corrie or cirque with an impressive hanging valley lying directly beneath.  Lake Nakeeroge is the lowest corrie lake within Ireland at approximately sixteen metres.  Another corrie lake Lough Bunafreeva west located on the western side of Croghan Mountain is perched on the edge of a steep cliff side at three hundred  & fifty metres above sea level.  It is believed that the separation of Innisbiggle from Achill Island was the result of submergence or a rise in sea level with the creation of a narrow channel of three hundred metres in width.  Joined also at an earlier era were: Achill Beg, Cloughmore & a portion of south-west area of Curraun peninsula prior to the Atlantic Ocean’s force through unresisting rocks that resulted in the formation of Achill Sound.  Images feature on this site.[iii]

Within Ireland a major north east-south west fault zone (the Fair Head-Clew Bay line) separated high-grade metamorphic rocks (the Dalradian supergroup )  originally deposited on an ancient continental margin from lower – grade rocks of oceanic affinity. (the Clew Bay complex )  This fault zone continues towards the north – east into Scotland, where it is known as the Highland boundary fault also to the west into Newfoundland & the Appalachians where it is termed the Baie Verte-Brompton line.  It is one of the longest fault zones in the Caledonian / Appalachian mountain belt.  It has been active several times during this mountain-building episode also it has played an important role during the evolution of this orogenic belt.  Throughout most of Ireland this fault zone is generally very poorly exposed with the relationships between the rock units on either side of this discontinuity have therefore proved controversial during the past.  However, it is superbly exposed on the coastline sections of Achill Island also Achill Beg in western Ireland.  This enabled detailed geological field mapping with the adjacent rock units that enabled a broader understanding of the tectonic significance of this major lineament.  A 1:2,500 geological map has been completed of the region surrounding the fault zone known locally as the Achill Beg fault. This has demonstrated that the two rock units (the Dalradian supergroup & the Clew Bay complex)  have a remarkably similar history of deformation.  They were likely to have been deformed contemporaneously during an early phase of the Caledonian orogeny.  One may download a map at this link. [iv]

Slievemore is one of a series of notable mountains that form a particularly important part of the landscape of the west & north-west coastal regions of County Mayo.  This part of county Mayo is a mixture of low-lying coastal plains, inland bogs with rolling hills separated by large steep-sided or highly visible mountains.  Slievemore is the second highest mountain on Achill at six hundred & seventy – one metres OD, it dominates the western half of the Island.  On the northern side of the mountain, it plunges steeply down into the Atlantic Ocean.  Low valleys at the east & west separate it from the adjacent lower ridges.  Slievemore has gentle lower slopes that stretch up to around the two hundred & fifty metres contours also at its higher levels are large scree slopes.  Above these a wide ridge slopes up from the west towards the summit.  Ridge is covered with exposed boulders that were broken up or eroded peat formations.  The slopes narrow with the summit area (a small circular cairn & a trigonometry point mark this summit ) is small also flanked by very steep drops to both the south & north.  To the south  is a low-lying bog that stretches out to the coast at Keel & it contains the large freshwater Keel Lake.  A substantial glacial corrie is located behind Dugort Village at the north-west.  The geology of the Slievemore Mountain comprises of quartzite with schist that descend towards the lower contours close to the deserted village.  Frequent veins of milky white quartz are found with a massive quartz boulder known, as ‘The Star’  lies high up on the southern side.  Overlying the bedrock is a deep layer of grainy sandy till that contains frequent small boulders also pieces of the white milky quartz.  An expanse of Atlantic blanket bog with various depths covers the till.  This peat bed consists of the partially decayed remains of bog plants like sphagnum moss, ling heather also purple moor grass. Waterlogging with acidic ground conditions halt the normal process of bacterial decay so that the partially decayed plant remains form deep accumulations of dark brown & black peat.  Achill archaeological field school excavated several sites that revealed a pre-peat soil that directly over-lay the till also under-laid the peat bed.  The pre-peat soil or gray sandy silt demonstrated that Slievemore would have been covered with rich pasture lands prior to the onset of bog growth.  In the centre of Slievemore ‘Roundhouse 1’  a post abandonment soil was discovered that had become waterlogged so preserved thousands upon thousands of individual blades of grass, a discovery that was particularly evocative at this earlier environment.  (Blog Post 1 ) For further information email: http://www.achill-fieldschool.com [v]

This article has information on the Achill terrain with a small hanging valley also a tumbled glacial terrain of block moraines with beautiful wild loughs.   The geological origins of this ‘terrace’  are clearly discernible on the ordnance survey sheet 30.  It is possibly a relict level that predated the glacial excavation of the now lough-filled hollows below.  Intense glacial erosion appeared to have cut back through the pre-existing ‘terrace’  in one corner of the Cullydoo that resulted in the creation of a high boulder-strewn concave backslope that reached almost to the summit of the Corraun Plateau. (Michael Guilfoyle The Irish Times 22ndDecember 2014 ) [vi]

There are at least four different stones with various hues of purple, gray-green, orange also white on Achill island that are primarily schist, quartzite & gness.  The basement rocks according to geologists are amongst Ireland’s oldest rocks from the pre-Cambrian era. This site has several images of Achill Island by artist Eoin Mac Lochlainn. [viii]

Achill Island lies on the European Continental Shelf that was part of the Eurasian Plate.  The island’s main geographical features included low central plains surrounded by coastal mountains.  Croaghaun is the most westerly peak of the island, it stands at six hundred & sixty-four metres.  On the northern slope of the mountain lie the highest sea cliffs in the country also the highest within Europe.  These cliffs are part of a vast array of sheer rock faces which start south of Keem Bay then loop around Achill Head onwards Slievemore where they drop almost vertically into the Atlantic Ocean.  A local geological boundary exposes a seam of amethyst quartz in the cliffside.  Amethyst is a semiprecious stone with a magnificent purple to violet coloration: according to folklore the stone possesses several properties that include a love charm as protection against thieves or drunkenness but most especially as an aide to sleep. [ix]

The Geological Heritage of County Mayo  published on 20th November 2020 included the audit of county geological sites of county Mayo, completed in 2014 then revised in 2019. The audit was carried out by Ronan Hennessy, Martin Feely, Matthew Parkes also Sarah Gatley.  Mayo Geological Heritage Project was supported by geological survey Ireland, Mayo County Council also The Heritage Council.  The resulting report is a contribution to the County Mayo Heritage Plan 2011-2016. [x]

The following publications may be of interest:

Chew D. M.  Structural and stratigraphic relationships across the continuation of the Highland Boundary Fault in Western Ireland  2003  in The Geological Magazine  140 (1), (pages 73-85 ) [xii]

Kennedy Michael John The structure and stratigraphy of the Dalradian rocks of north Achill Island, County Mayo, Ireland 1-4 December 1969   in the Quarterly Journal of the Geological Society  volume 125.

Kennedy M. J. The metamorphic history of North Achill Island, Co. Mayo and the problem of the origin of Albite Schists 1968-1969 Proceedings of the Royal Irish Academy Section B: Biological. Geological and Chemical Science vol 67 (pages 261-280 )

Both the above may be downloaded at this link: https://www.jstor.org/stable/20494917

Mc Donald T. & Rathbone S.  2009 Achill Island: Irish Archaeology from the Neolithic to the Great Famine  may be downloaded at this link: https://www.researchgate.net/publication/331260852_Achill_Island_From_the_Neolithic_to_the_Great_Famine

Mc Donald Theresa 2016  A Guide to Archaeological and Historical Sites on Achill, Achillbeg and the Corraun Peninsula  (I. A. S. Publications Tullamore ) may be viewed at: https://achill-fieldschool.com/afs-staff/dr-theresa-mcdonald-miai/

Mayo geological information is available at this link: http://www.geoschol.com/counties/MAYO_GEOLOGY.pdf

In north Achill large-scale F2 folding places the equivalents of the Moine series structurally above the Islay succession in the core of an F2. Anticline: https://jgs.lyellcollection.org/content/125/1-4/47

A September 1878 geologically surveyed map by W.F. Mitchell  &  McHenry Alex may be downloaded at this link: https://webapps.bgs.ac.uk/data/maps/maps.cfc?method=viewRecord&mapId=129

Lewis Samuel  Mayo Geology 1837 from  A Topographical Dictionary of Ireland  may be viewed at The National Library of Ireland: https://www.libraryireland.com/topog/M/Mayo-Geology.php

Farrington A. Local Pleistocene glaciation and the level of the snow line of Croaghaun Mountain in Achill Island, Co. Mayo, Ireland 1953