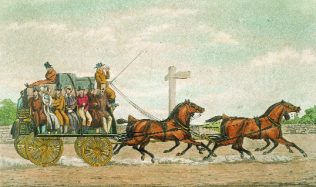 Carlo Bianconi (later angelized to Charles) was born in the Lombardy Highlands, near Como, Italy on 24th September 1786.  He had three brothers & two sisters.  The Bianconi’s like all their neighbours worked in the silk culture.  (Published in 18th-19th Century Social Perspectives, 18th–19th – Century History, Features, Issue 5 (Sep/Oct 2007), The Famine, Volume 15)   [i]

Bianconi’s father paid for him aged just sixteen years in 1800 to be sent on an eighteen-month apprenticeship to art dealer, engraver, printer Andrea Faroni in England.  Faroni with Bianconi also three other apprentice boys in tow Giuseppe Castelli, Girolamo Camagni & his friend Giuseppe Ribaldi crossed the French Alps  (http://www.franceguide.com/ ) on foot during 1801 from Tregolo to London but as Faroni decided to relocate to Ireland: Bianconi eventually arrived in Dublin during 1802.  [ii]

Charles was employed during 1802 as an engraver on Essex Street in Dublin.  The following year Bianconi sold Faroni’s engravings throughout the countryside as far as Waterford weekly, with four pence to cover his expenses into rural Ireland.  Leaving Dublin early on a Monday morning with his pictures; he travelled on foot throughout Munster & Leinster selling his wares.  He organized his route to ensure he would return to Dublin by late Saturday night.  The following year he set up on his own route, as by then had mastered the English language also he was proficient in the trade. [iii]

During 1806 Bianconi opened a shop in Carrick-on-Suir: he purchased his supplies of gold leaf  & other materials from Waterford.  He travelled to Waterford by river, on Charles Morrissey’s boat, which carried eight or ten passengers for 6½d each (‘sixpence ha’penny’ )  The trip on the meandering River Suir was twenty – four miles which was twice the overland distance also as the river was tidal: the trips were dictated by all tides.  [iv]

During 1832 Charles Bianconi married Eliza Hayes the daughter of a wealthy Dublin stockbroker.  Later on 21st February 1865 he married Mary Anne Bianconi, then aged twenty-five years (whose demise occurred in 1908)  Charles & Eliza had one son, Charles also two daughters Kate & Mary Anne.  The demise occurred of Kate in 1854 also her brother Charles ten years later during 1864.  The other surviving daughter Mary married during 1864 Morgan John O`Connell, a nephew of Daniel O`Connell (The Liberator)  She succeeded to his mother’s property in Co. Clare known as the McMahon Estate.  She was the authoress also compiler of several books including the life story of her father:  http://www.clare.ie/  (Charles Bianconi, A Biography)  [vi]

Bianconi had travelled on foot around Ireland while he carried his heavy materials, (he often walked twenty or thirty miles each day): this ensured that he realized there was a great need for a cheap or reliable integrated transport system.  On 6th July 1815 the first Bianconi two-wheel horse drawn cart that carried three or four passengers went into commission.  Travel on these ‘Bians’ as they were to become known cost one-penny farthing a mile.  Such was the demand that over the following years his enterprise expanded to amassing nine hundred horses also sixty-seven coaches with Clonmel, Co. Tipperary as its hub.  During 1833 he introduced the ‘long car’  that enabled him to carry up to twenty passengers with cargo.  He delivered mail for both the British & Irish Post Offices.  His depot was situated in O ‘Shea’s Hotel in Thurles, Co. Tipperary: the actual stables where his horses were fed or changed still exists relatively unchanged. [vii]

His business eventually had one hundred vehicles that travelled over three thousand miles daily. These called to one hundred & twenty towns & forty stations for the change of horses.  Each of these employed up to eighty-nine grooms with one thousand horses with  three hundred required to pull the cars.  The horses consumed three thousand-fifty tons of hay a year also thirty-five thousand barrels of oats.  [viii]

But perhaps not so well known is that the Walsh homestead (on Westport road outside Castlebar) had links with the accommodation sector which stretch back well over one hundred years.  It was here that the legendary Charles Bianconi established during 1836 his stables with accommodation for his horse-drawn transport system which would revolutionize future travel within Ireland.  During 1836 he introduced his system to Castlebar with the town as the centre of three services.  One was for mail coaches to Ballina then on to Sligo, a second from Westport to Dublin, also a third from Westport to Tuam in Co. Galway. The smaller express coach carried four people, the larger one could carry up to twenty.  Bianconi’s system required stabling for horses as well as accommodation for passengers &  the jarveys. Within Mayo his chosen location was where Rocksberry B + B is located today.  In fact, the fine stone building ruins still stands at the corner of the Walsh property, beside the main Westport road, it has for generations been referred to locally by its old title, the ‘Mail Coach Stage.’  The two-storey building had stabling at ground level with accommodation on the first floor: as with all such stopping points on the network it was known as a Bianconi Inn.  (John Healy Country View Mayo News 30th May 2017 ) [ix]

Charles Bianconi’s Mayo network was extended to include a daily service from Longford to Ballina that ran through Foxford.  Bianconi revolutionized movement for the people of Mayo when in August 1851 he announced an ambitious new route that would take a patron from Ballina to Dublin in one day.  The two horse car would leave Ballina every morning at 5.45 am (except on Sunday): it would progress first to Castlebar, then Westport, Leenane, Letterfrack on to Clifden in time for the mail coach from Galway to Dublin, also in time for the Westport & Castlebar day coach to Galway railway station.  In addition to the two – horse car, the entrepreneur timetabled a well-equipped four horse coach to depart Westport for Castlebar every morning.  When it left Castlebar the coach would pass through Ballinrobe then Shrule on its journey to Galway.  The capacity for the four-horse coach was fifteen passengers, four inside with eleven outside the vehicle. Bianconi boasted that by availing of his routes, the Mayo traveller could be in Dublin that very same evening enjoying an early dinner. (Campbell Noel Irish Advertiser 11th November 2016 )  [x]

By the mid nineteenth century most of the mail coaches in Ireland were eventually out – competed by Charles Bianconi‘s country-wide network of open carriages prior to this system in turn succumbed to the railways. [xi]

End of an Era

The advent of the railway during 1834 resulted in Bianconi’s realization that his coaching business had a limited future.  He immediately began to buy shares in the railway lines as they were being constructed.  He sold coaches or long cars to his employees also those who had previously worked for him.  [xii]

Bianconi became involved locally in Clonmel civic affairs.  He was a Director of O‘Connell’s National Bank.  From 1843 to 1846 he was elected an Urban Councillor.  He served twice as Mayor.  He purchased the one-thousand-acre-property (known locally as Longfield House) in the parish of Boherlahan in Clonmel, Co. Tipperary where he resided for twenty-nine years.  [xiii]

Bianconi’s demise occurred during 1875 at aged eighty-nine years.  He is buried in the family mortuary chapel in Boherlahan, Cashel: which he had designed also partially constructed himself.  Legend states that as he breathed his last breath a phantom coach and horses were heard coming up the drive of his much loved Longfield House.  [xiv]

He joked in later years that the ‘the idea that grew on my back’  was the result of his transportation as he carried his wares in a large box, strapped to his shoulders.  The box according to Bianconi himself weighed approximately thirty pounds in weight.  [xv]

In a speech during  1857 Bianconi summarized his service: ‘My conveyances, many of them carrying very important mails, have been travelling during all hours of the day and night, often in lonely and unfrequented places; and during the long period of forty-two years that my establishment has been in existence, the slightest injury has never been done by the people to my property, or that entrusted to my care; and this fact gives me greater pleasure than any pride I might feel in reflecting upon the other rewards of my life’s labour.’   [xvi]

A very interesting article also features images of a Bianconi’s coach routes within Ireland, it includes a time-table.  It may be viewed at this link; https://www.historyireland.com/18th-19th-century-history/irelands-time-space-revolution-improvements-to-pre-famine-travel/

This link has interesting details of Bianconi’s life & business: http://www.odonohoearchive.com/charles-bianconi/

This link states that during 1815 Charles Bianconi commenced a stage coach transportation network throughout Ireland: http://ireland2050.ie/past/

Publications that referenced topic include these:  https://en.wikipedia.org/wiki/Charles_Bianconi

Smiles Samuel Charles Bianconi: A Lesson on Self-help in Ireland  1890

Ryan Thomas Joseph Bianconi: A Boy with a Dream: The Pioneer of Irish Transport  2007 (Ryan Publications)