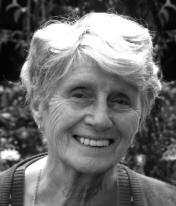 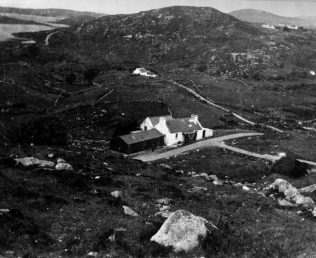 zoom
The cottage in Lettercaugh, with Lough Anure in the background.

It was seeing an illustration of Tra-na-Rossan Strand that brought my first husband, Alan Hemmings, and I to Donegal in 1950. On our hitch-hiking holiday we met Dr.Molloy, in Dungloe.We stayed overnight at his invitation. During our time with him there had been a discussion of sorts about local industry and emigration.

Back in London, that autumn, a letter arrived from Dr. Molloy. He seemed interested in us starting up a hand-weaving business. He told us of a cottage available to rent and ended his letter: ‘Did we want to come and try our luck with the weaving project?’ He lent us 300 pounds over five years. Relatives were also talked into putting up money for our venture.

In June 1951 we travelled to Donegal. We arrived very weary and a little apprehensive. The following day Dr. Molloy and Patsy Sweeney, the Dungloe solicitor, drove us to our cottage in Lettercaugh. It was a townland, just above Lough Anure.

We had no kettle with us, no cups and saucers. A local widow lent us a kettle, cups, saucers, and plates. The only method of heating water was to be by open fire. There was no electricity. I washed the clothes and rinsed them in the stream across the road, in an open well. I struggled with cooking on the open fire. We bought both a bread oven and a crock, which was a three-legged cast iron pot with lid and handle. This was hung from a hook on a chain, suspended from inside the chimney. I cooked many things, such as pancakes, bread, scones and at Christmas, a Christmas cake.

In September the hand-weaving loom arrived – having been sent first to Kerry in error. My sheets and saucepans arrived also. When we first moved to the cottage there was a small amount of furniture: a table, some chairs and a bed (all soon repossessed to pay a debt due from previous tenants). So, Alan made a table and also some wobbly chairs. We graduated from sleeping on the floor to sleeping on the wooden packing case. We could not afford a mattress, so we padded the bed with clothes. This was extremely uncomfortable to sleep on.

The combination of early marriage and starting up a venture in such a wild and somewhat primitive location made life tough. It brought out the pioneering spirit in me, however, and inventiveness to overcome difficulties. Did I ever get overwhelmed or despondent with my life? It was difficult coping with primitive living and working conditions. Life was also very busy. Household chores took up a lot of time. Preparation for meals, washing, then into the weaving shed to weave or fringe scarves and stoles.

That summer, 1952, Alan set off cycling to Falcarragh to sell some of what we made. Charlie Green took six scarves for his shop, ‘sale or return’. At this time we were very low in finance, for milk and turf especially. We toasted bread and used beef dripping on it instead of butter. Then the miracle of our first cheque! Some fresh produce was given to us by the Lough Anure school principal, as I was pregnant. The relief was great – I remember saying grace before we ate such welcome food!

Roger was born on February 27th, 1953. How ever did I manage when I brought Roger home? Childhood is a huge change (and challenge) – in a mother’s life anyway. No running water, no electricity, no phone for emergencies, and just the turf for cooking and heating water. When Guy was born, in 1955, I had two children in nappies, in primitive rural conditions.

Alex Nesbit, of Arnotts, now held the majority of the shares. I was not keen to move, having put down roots, though tentative. So much of me was in the cottage, the mountain views, the simplicity of living in the country. A factory place was found, in Verschoyle Place, off Mount Street. It was dark and cramped, Dickensian in fact. The home accommodation was in a top floor flat in Raglan Road. Now I had running water from a tap and also a bath! There was an electric cooker, a real bedroom and a proper sink to wash the clothes in.

Later we moved to our first suburban semi-detached home in 1959, when Louis, our third and last child, was two years old. The house was in Ardagh Park, Blackrock. All my children started school at All Saints’ National School, Carysfort Avenue, Blackrock.

Now I was freer to design and to invent colours and separates. My input into Donegal Design increased when the factory moved to Clonskeagh.What had begun with inventing shades of colour and finishes, now encompassed collections twice yearly, with new colours each time. This meant that sample blankets had to be worked out on paper, then woven. A very long sample blanket was woven annually, to my specification, from which I then cut sections, finally choosing the best ideas.

I now designed and oversaw the production of jackets, ponchos, coats, capes and cape coats. This also meant that linings and dyed buttons came into the process. I was pleased to win various Irish and European textile awards: The Bavarian State Gold medal, and The Córas Tráchtála design award.

After I divorced in 1973, I married Gerald Elliott in 1977. He was working as director of Elliott Poplin, his family textile business, in the Coombe. I designed and sewed poplin period-style dresses which are now in the textile collection at Collins Barracks Museum, Dublin. I am 80 years old now and still make and alter clothes, still creative and restless after all these years…..

Joy Elliott, born in Derby 1931, is a self taught colorist and clothesdesigner. Donegal Design was the first company in Ireland to create brightly coloured, brushed mohair textiles. Joy won a number of awards for her colours and designs. She paints abstract pictures and has designed church altar frontals and banners.

Joy’s book From Derby to Donegal is available in a Kindle edition on the Amazon website, www.amazon.co.uk.