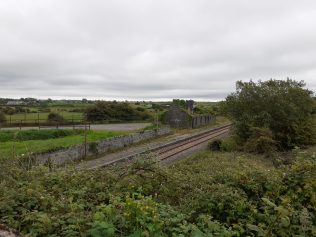 The Midland & Great Western Railway (MGWR) of Ireland extended the railway system into Mayo towards the end of the nineteenth century.  That company formed in the 1840’s was the third largest railway company in the country.  The Westport line was extended to Mulranny in 1894 then on to Achill a year later.  Railway construction continued with the lines extended from Claremorris to Ballindine also Ballinrobe.  Approximately two thousand people were employed in the commencement of railway to Ballyhaunis.  Railway lines were constructed in Bellacorrick in 1958 & Bangor Erris in 1964 to assist transportation of peat harvested by Bord na Mona for use at Bellacorrick ESB power station.  During 1925 (MGWR) amalgamated with other railway companies to form the Great Southern Railway.  The 2003 The Story of Mayo By Rosa Meehan (published by Mayo County Council) stated Ballyhaunis-Claremorris-Castlebar line was constructed during 1862.  The first railway line laid in Mayo was in the standardised five-feet three-inches wide gauge: (Tom Gillespie)  North Mayo was first serviced in 1869 by a railway line from Manulla Junction to Ballyvary thence to Foxford also in turn connected to Claremorris-Castlebar line. Waterford & Limerick Railway was responsible for another line that headed north from Claremorris with stops at Kiltimagh, Swinford & Charlestown then continued on to Curry in Co. Sligo.  Four years later Foxford was linked to Ballina: then twenty years later Ballina was linked to Killala.  Foxford Station, on the Ballina line, received a reprieve: initially closed in 1963, it was reopened during the 1980’s.  (Tom Gillespie 1st August 2021)   [i]

During the nineteenth century Mayo’s railway line commenced with the formation of the company of Johnson & Kinder of Worcester England.  The beginning of the Limerick to Sligo line was called the MGWR railway company with £50,000 invested in the line.  Construction commenced during 1853.  These notes recorded & transcribed by Cathal Henry provided information on the forming of the local railway line: ‘Circa 1892 the Claremorris & Swinford Unions appointed the following delegates: James McGarry, Conor O’Kelly, Tommy Kelly and Mark Henry to meet the British Prime Minister of the day, Mr Bonar Law, to convince the British Government to run the railway line from Claremorris through Swinford and Charlestown to Collooney in Sligo.’ ‘ Signed: Thomas Canon Loftus PP, and JC McDonnell, C. C. Meeting 1st of October 1895  Proposed by Mr. Staunton, seconded by Mr. Sheridan resolved that; as this is the opening day of the Claremorris-Collooney Railway line, we adjourn the remaining business of the board to give an opportunity to the Guardians and others concerned, to travel over a portion of the railway and see for themselves how they appreciate it’s completion.’  [ii]

A detailed map of Ireland’s rail networks from the 1920’s may be viewed at this link: https://www.euronews.com/next/2021/09/17/how-ireland-turned-disused-railway-lines-into-thriving-greenways

This link may be of interest: http://www.industrialheritageireland.info/BookReviews/Railway%20Book%20Reviews.html