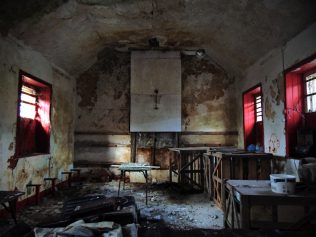 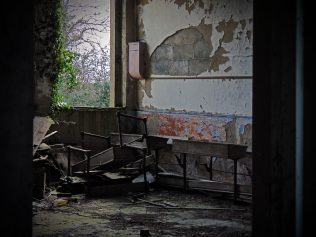 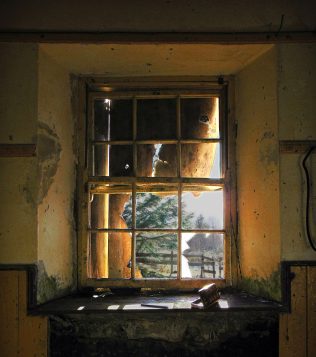 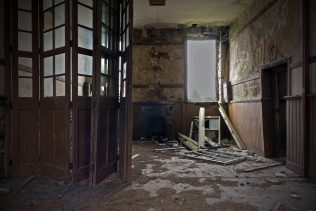 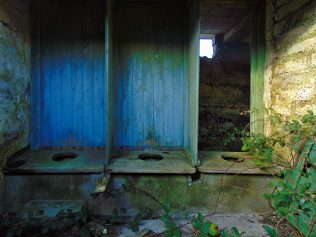 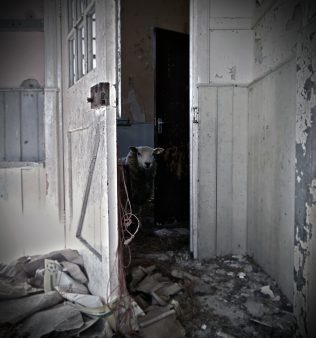 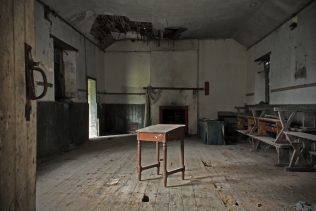 Why there are so many abandoned national schools scattered across the rural Irish landscape? In short, it’s a story of changing demographics, emigration, depopulation of the rural countryside, and the changing requirements of rural settlement. To begin this series, I thought I’d write a little something about what I find inside these abandoned buildings.

As the title of this post suggests, I’m not just interested in the buildings, their architecture, or the fittings, furniture and the debris that is strewn across these echoing spaces, but also in the stories they tell, their settings, and the nostalgia and memory that make up these cognitive landscapes. As time passes they have a growing significance as relics of a disappearing rural Irish life, especially as the landscape around these school houses changes.

Dilapidated and empty, haunting and isolated

Visiting Reyrawer National School in the Slieve Aughty Hills last Autumn was a fine example of such a disappearing landscape. The autumnal evening sun hung low in the sky, and the few clouds that had lingered as twilight beckoned were tainted red and orange around their fringes by the setting sun. On the low hillside, and hidden in the dense forestry plantation of the Slieve Aughtys, was the now-disused, one-roomed Reyrawer National School; dilapidated and empty, haunting and isolated.The now forested hill-sides were dotted with the ruins of former farmsteads. The former pasture and rough grazing lands had been sown with coniferous plantations, and the ubiquitous and imposing wind-turbines highlighted the movement away from agrarian living in this area, as an alternative and profitable use is sought for this now people-less landscape. In the Aughtys, the result is an empty space, a desolate place where few people live.

The school was no longer needed

An unintended but welcome consequence of this depopulation is the creation of a welcome retreat from the ribbon development popular across much of the Irish landscape – though the man-made forests bear a hunting watermark of former settlement, with field boundaries, bóithríns, houses, farms, and infrastructure such as disused schools, hidden throughout the forests. When Reyrawer National School was in use, this was a lived-in landscape which supported a scattered, largely agrarian population. With the movement away from this lifestyle, the landscape was emptied and the school was no longer needed. The plaque on the eastern gable of the building dates the construction of the school to 1891. It closed in the late 1950s.

A wealth of memory and associations

From travelling the countryside to photograph these old schools, I can tell you that there is a greater proliferation of abandoned schools in more rural and depopulated areas, with a near absence of them in urban centres. For many who emigrated from rural Ireland at an early age, their days spent in these rural and isolated school houses often represented the last formal education they received before seeking a brighter future abroad. Although many of these buildings are now physically empty or approaching a point of collapse, the physical structures are cognitive stimuli for those who attended, and hold a wealth of memory and associations that shaped their understanding of the world around them at an early age. From these small rural school houses the children of Ireland took what they had learned and went out to find fortune and to explore the greater world.

Easier to photograph than memories

I don’t have any true explanation for why I began photographing these schools other than the fact that I found the eerie, tumbling, and empty ruins a fascinating, haunting atmosphere. I guess what I do could be classified as  Urban Exploration, or ‘Urbex’ though the schools I visit are rarely in an urban setting. And besides, as I mentioned above, it’s not just the architecture and debris that I’m interested in, but also in the stories they tell and the memories they hold. However, school desks, blackboards and fireplaces are easier to photograph than memories. Nonetheless I occasionally meet people who have memories of these buildings while they were still alive. While visiting Clogher National School in Co. Leitrim, I was lucky enough to meet James and Kathleen McTague who kindly reflected on their school days there. Built in 1882, the school closed in 1971 when the local population could no longer sustain it. Below is a brief clip of their reflection.

Our experience of the classroom and the schoolyard

Memory is dynamic and fluid – a pulsing living thing. It can be continually stretched, coveted, erased and manipulated by the environment and circumstances from which it is recalled by an individual or group – taking on greater or lesser significance than that determined by the interpretation of those who recollect in the present. Outside of an individual’s family, or tragic and traumatic events in our youth, it could be argued that few things have greater impact on our development and personality, our understanding of the world around us, and our coping mechanisms to deal with and interpret that world as our experience of the classroom and schoolyard. With this in mind, consider how much of an impact these now rotting buildings may have had on the lives of many.