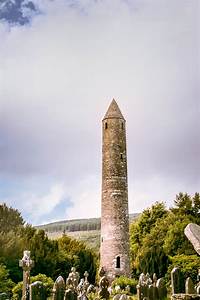 Ireland’s Round Towers ‘Cloigtheach ’ were a distinctive feature of the Irish landscape.  Several various eras are offered as to the original date of construction during Ireland’s historical foundations.  Round Towers were established as free-standing structures; shaped like a stony tube, topped by a conical roof.  These were constructed between tenth or thirteen centuries as ecclesiastical buildings also protection from Viking raiders or warring Local tribes.  Initially roofs were wooden but due to vulnerability of fire or lightening were replaced by stone roofs to reduce danger.  Stone roofs also improved acoustics also the bell’s resonance.  Builders were extremely skilled experts with knowledge of pulleys, hoists or the external scaffolds.  All towers foundations were just 0.51 metres below ground level.  They were approximately thirty metres in hight with a single doorway.  Inside wooden floors divided the space into levels.  The last one under the roof included four windows for illumination.  During 1845 the artist, scholar, antiquarian George Petrie demonstrated their ecclesiastical origin & functions of the peculiar buildings.  He portrayed that the towers were constructed near monasteries where the ringing of the bells were essential for the monastic life with a call to monks at prayer time.   [i]

Round Towers ranged in height from approximately twenty metres to forty metres.  The doorways may have been of Romanesque round headed or lintelled shaped while the windows were small: set high up in the drum.  Tower’s interior was divided into several floors with each one reached by ladders inside the building.  The roof was conical in shape.  [ii]

Remains of sixty-five round towers are scattered across Ireland; soaring as high as thirty-four metres above ground level.  With a probable construction period between the seventh to thirteenth centuries the towers were at sites of well-known Christian churches from the fifth to twelfth centuries.  Initially the towers were free standing structures; in later years monastic foundations were constructed around the towers.  The principles used were the same for all: two walls of block & mortar constructed with space in between with a core of rock rubble.  Of the original sixty-five towers: twenty-five were built with limestone, thirteen of iron-rich, red sandstone whilst the rest were of balsalt, cray slate or granite.  Thirteen towers retain their conical caps. [iii]

In his Irish Round Towers  Lennox Barrow’s article on dimensions stated that: ‘it is remarkable how little the main dimensions vary.  In the great majority of towers, the circumference at base lies between 14 metres to 17 metres.  The thickness of the wall at the lowest point on which it can be measured varies from 0.g metres to 1.4 metres.  Most doorways were raised 15 metres to 45 metres above the ground.  The higher you could build before making an opening in the wall; the stronger the base would be.  Doorways. windows, story heights & diameter also follow clearly defined patterns, & we may well conclude that most of the towers were the work of teams of builders who moved form one monastery to another using the standard designs.’   American scientist professor Philip Callaghan discussed in  Ancient Mysteries, Modern Visions  his research that ‘round towers may have been designed, constructed, utilized as huge resonant systems for the collection plus storage of metre-long wave lengths of magnetic & electromagnetic energy formed from the earth plus skies.’   He also stated that ‘the seemingly random geographical arrangement of the round towers throughout the Irish countryside actually mirrored the position of the stars in the northern sky during the time of the winter solstice.’  He discussed the probability that ‘the towers were powerful amplifiers of radio resonance from the atmosphere generated by lightning flashes around the world,’  ‘the Irish Round Towers were human-made antenna which collected subtle magnetic radiation from the sun and passed it on to monks meditating in the tower and plants growing around the tower’s base’ in another article from his The Mysterious Round Towers of Ireland: Low Energy Radio in Nature. The Explorer’s Journal  Summer 1993  (Martin Gray)  [iv]

From Armoy in County Antrim to Aghadoe outside Killarney there are sixty-five of these slender, tapered round towers in various degrees of survival.  Co. Galway has six towers.  Co. Dublin has four towers with counties Clare, Kildare, Kilkenny also Mayo have five remaining buildings.  Included in the above on island sites i.e. Tory in Co. Donegal, Scattery at mouth of the Shannon, Inishmore off Co. Galway’s coast, Ram on Lough Neagh, Cealtra on the Clare side of Lough Derg with two on Devenish at Lower Lough Erne near Enniskillen, Co. Fermanagh.  They range from thirteen which are complete to eight that merely now resemble stumps at not more than three metres in height.  (Paul Ross)  [v]

Dr. Petrie (1790-1866 ) concluded in his essay Round Towers of Ireland  that the towers were of Christian or ecclesiastical origin: they were designed to serve as belfries or keeps or places of strength in which all sacred utensils, books, relics also valuables were deposited.  They possibly served as beacons or watch-towers.  He also stated that the monks who they belonged to could retreat to safety in case of sudden attacks. [vi]

Dr. Petrie’s essay on The Origin & Uses of Round Towers  of Ireland won him a prize of fifty pounds from the Royal Academy of Ireland.  He published during 1845 The Ecclesiastical Architecture of Ireland anterior to the Anglo-Norman Invasion, comprising an essay on the origin & uses of the Round Towers.  [vii]

The belief  that towers were ‘Antennae’  also  forces of energy was trialled in an experiment of Turlough round tower ‘when it was soaked in a diamagnetic solution of Epsom salts, then allowed to dry naturally: thin force lines spaced evenly at one millimetre appeared up the tower.  On the conical roof at the top of the force line spiralled up to the point.  At certain heights up the tower the force lines became much thicker bands.  These correlate precisely with the floor levels in the actual towers.’   ‘On Turlough Round Tower the salts concentrated heavily at the levels where floors and windows are located’   He stated that ‘The towers are aligned with the stars of the night sky at the winter solstice’  professor Philip Callaghan 1997 Enigma of the Towers  (Kindred Spirit) [viii]

Tadhg O ‘Keefe UCD professor of archaeology has suggested that the towers were originally high-status royal chapels.  He cited that two of them: Kells & Duleek were scenes of regicide with the windows arranged clock-wise to imitate the order of relic-carrying procession from the elevated door to the top. [ix]

One may view a video of lecture at this link: https://www.youtube.com/watch?v=7JlcIKDOHKk

Images with information on several round towers feature at these sites below: https://visionsofthepastblog.com/category/round-tower/

Barlow Lennox Round Towers of Ireland  1979  (Gill & Macmillan ) was also reprinted in 1994 by (Buvinda Publications ): https://en.wikipedia.org/wiki/George_Lennox_Barrow

Thomas Sheridan produced a documentary during 2017 that indicated the Irish round towers were of druidic rather than Christian origin: it may be viewed at this link: https://video.search.yahoo.com/search/video?fr=mcafee&p=turlough+round+tower+utube#id=7&vid=378979f340583c224dd213a878e8ebcc&action=view

This site has information on the Glendalough round tower: https://glendalough.wicklowheritage.org/new-contributions/glendalough-and-its-churches-archaeology-ireland-heritage-guide-no-72-march-2016

[vi] The Round Towers of Ireland (https://www.libraryireland.com/) [Assessed 7th January 2020]