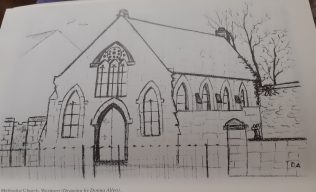 Initially the Methodists Churches were founded by the Wesley brothers; John & Charles during the mid-eighteenth century.  Along with other students at Oxford University, they met daily to pray & study ‘The Bible.’  Nicknamed ‘The Holy Club’ as they were so methodical in lifestyle that became known as Methodists: the name eventually became a religion.  John visited Ireland for the first time in August 1947 followed by twenty one more visits.  He preached in thirty-one Irish counties.  Early meetings were held in Marlborough Street & Cork Street, Dublin.  The first Irish Methodist building was at Whitefrier Street, Dublin established during 1752.  The site later was expanded to include a day school for boys, an orphanage for girls, a widows’ alms-house, a book room & two houses for ministers.  During 1845 the congregation moved to St. Stephen’s Green.  The Methodist church in Ireland is referred to as ‘The Connexion.’  They host classes of which a group form a society or congregation are administered by a church council.  A large society group then form a circuit that is administered by circuit executive.  Groups of circuits form a district overseen by district superintendents administered by a district synod.  Currently there are eight districts.  A conference is the superior council of the church body with final authority. [i]

The Methodist Church seeks to be a Christian community which is open & welcoming to all.  At its heart is the conviction that everyone can know, then experience the love of God for herself or himself.  God’s love changes all to be more Christ like.  It is also to be shared with the whole community particularly with the most vulnerable.  Thus, city missions are an important part of Methodism.  Methodist’s stress that God’s love affects the whole person, body, mind as well as spirit.  [ii]

During 1839 the Wesleyan Centenary Chapel & Manse were established.  This was followed by a schoolhouse built in 1857.  The present Methodist Church has been created within the old schoolhouse.  The old communion rails with two memorials from the old Wesleyan chapel are incorporated into this church. [iv]

This site states that there were places of worship for Baptists also Wesleyan Methodists: https://irelandxo.com/ireland-xo/history-and-genealogy/timeline/ballina-town-1830s

This fine Anglican Church was constructed in 1739.  Renovated during 1829 following storm damage. Inside the main gate lies the gravestone of The Frazier’s Fencibles a Scottish regiment, killed in 1798.  A monument to Major General George O Malley was erected by his friends in 1845 in recognition for his bravery in the British army.  Across from the Church of Ireland stands a memorial to the people who died fighting for freedom in the Rising of 1798.  Beside this is the grave of John Moore first President of Connaught who demise occurred in Waterford during 1798.  His remains were re-interred on 13th August 1961 with all the honours of church & state.  Ceremony was attended by the then President of Ireland Eamonn de Valera. [v]

The building was in use previously as a Wesleyan Methodist Chapel.  Foundation stone was dedicated by Wesley himself on the 21st May 1785.  It is thought to be the oldest building in Castlebar, also the only building in Ireland to have a ‘hands on’ connection with Wesley.  Today the building is used by the Castlebar Christian Fellowship, a Pentecostal congregation: one of the Elim ministries within Ireland.  This site features a beautiful image of the chapel. [vi]

The Anglican Church was erected during 1739 later renovated during 1825.  The adjoining graveyard hosts the graves of Fraziers Fencibles a Scottish regiment killed during The Races of Castlebar in 1798. The  Christ Church tower clock was installed in 1905 by Keith Cannon clockmaker of Smith of Derby.  Further damage was then repaired during 1996. (Tom Gillespie ) [vii]

The original Methodist Church on Castlebar’s Mall was constructed when John Wesley who  laid the foundation stone on 2nd May 1785.  A plaque to him is on the building.  This building now is a Pentecostal centre. [viii]

Now the Christian Fellowship Centre: it is one of the oldest buildings within the town.  The foundation stone was blessed by the founder member of the Methodist Church during 1785.  It is a pure neo-Romanesque building with an excellent cut-limestone doorway. [ix]

This church was built during 1820 on a site donated by Lieutenant – Colonel Thomas George Fitzgerald.  It is cruciform plan with a tower embellished by Irish battlements at the main entrance.  Pews are on either side of a carpeted aisle that leads to altar & pulpit.   Tablets & memorials honour  the Fitzgerald family.  The Alex Chestnutt organ was restored during 2003. This site features images of the church & memorials: https://www.tripadvisor.ie/Attraction_Review-g13307235-d17624344-Reviews-Turlough_Church_Of_Ireland-Turlough_County_Mayo_Western_Ireland.html

The old gray-stoned Methodist Church was located on the South Mall in Westport was an important edifice according to Donna Allan in her article (along with a sketch of building) in the Cathair na Mart  Historical Journal  1996 no. 16 (pages 62-65)  A Formal society of parishioners was formed during 1784 with services held in private houses.  One of the first members Mrs. Lawrence in fact spent the following fifty-one years with the Westport Methodists.  The Gothic-style one-story structure dated back to John Wesley’s visit to the town on 25th May 1762: on what was his ninth of twenty-first visits to Ireland.  He reported that ‘at 10 o clock I began reading prayers.  After the sermon I had a little conversation with Lord Westport- an extremely sensible man.’   According to the Marquess of Sligo in Westport House and the Browns 1981 (page 18 ) John Brown became Viscount Westport during 1770 then First Earl of Altamont in 1771.  During 1804 permission was granted for the building of a chapel, it was not at that time constructed possibly due to lack of funds.  There were two visits of evangelists Adam Averell during 1812 then  Giden Ouseley had an unwelcome visit to the town.   Methodist Charles H. Crookshank recorded that during 1886-1888 a schoolhouse was acquired &  converted into a chapel in 1820.  By 1831 membership numbered eighty-seven.  Two members James White & Samual Larmine visited patients in hospital or their homes the following year during the Cholera epidemic.  By 1834 special services were held but with reduced numbers of fifty-three members.  At the height of the famine ministers were involved in relief work.  A dedicated member of the congregation was William Clay of the Irish constabulary from Ayle during the 1850’s.  Clay mentioned in his diary a Rev. Mr. Eccles then Rev. Gibson Mc Millan who arrived in July 1852.  He married the Mc Millan family governess Eliza Eglinton: they both later emigrated to Australia.  During 1875 the Methodist conference granted permission for a new chapel on the site of the old one.  Among the contributors was the Rev. William Arthur whose mother had acted as postmistress in Newport, said to have been ‘converted ’ in the first church when John Holmes was The preacher who was superintendent of the Castlebar circuit.  William Brown Esq. laid the first field stone on 16th January.  The building was completed on 28th July at a cost of one thousand pounds with two very well attended services.  Following WW2 Mr. & Mrs. Moore were among the last members of the church: following his demise she continued with his duties.  The church folded following her demise.  The church was sold to a builder during 1962; it was used for several years as a storage place. (Donna Allan)  [x]

(This building is now in use as a restaurant NBC )