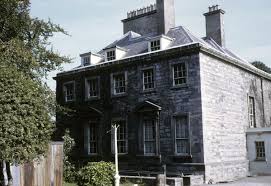 According to the Oxford English dictionary: ‘chimney‘ originally meant a ‘fireplace.’  It is thought to have been derived from the Latin ‘caminus’  a furnace, forge or oven.  During the Middle English it was called ‘chimenee‘.  Known as chimney stalks with a cluster of stalks called a stack.  The chimney pots were a superstructure that sat atop the stack.  Chimneys have been an especially important part of buildings for centuries especially in these colder climates where there is a need to retain heat yet remove smoke or to prevent downdrafts.  It is difficult to understand how some early chimneys were made from wood, how appropriate that the practice was outlawed by early fire prevention laws!  Valentine Fletcher coined the word ‘caminology’ as the study of chimneys.  Various chimney designs featured on this site. [i]

During the thirteenth century chimneys were produced of clay or tin in Britain.  They were known as ‘cans ’ in Scotland also as ‘tuns ’ in south west Britain.  The purpose of the chimney was to increase the speed with which smoke rose upwards by reducing the size of the outlet. The reduction of opening size prevented the entrance of rain or a downdraft of air that prevented the smoke exiting the building or the scatter of hot embers from the fire.  The openings called pockets, grills, horns or louvres in a pot prevented cross drafts on the top end, they also served to increase the smoke’s flow upwards.  Pots were ‘flanched ’ or ‘flaunched ’ in place on the stack for prevention of mortar or cement sloping inwards towards the pot.  Clay pots usually were produced as terracotta red, terracotta buff or salt glaze.  The latter type of pot produced weatherproofed pots that also prolonged its life as the silica in the clay combined with the sodium in the salt formed a glazing coating of sodium silicate. The Chimney Pot Museum at Longport in Stoke-on-Trent has a collection of over two thousand, five hundred pots.  During 1964 the National Clay Foundation catalogued approximately five hundred chimney designs.  Several had exotic names i.e. smoke cure, champion, weemac or spiral captain. [ii]

For the Victorians: chimneys were ornamental or a source of aesthetic pleasure.  Their Georgian ancestors had not placed much emphasis on chimneys.  Thus, the Victorians created ornate soaring objects that pleased them.  The chimneys on detached or semi – detached houses often formed part of the formal symmetry of a building.  In a terraced or row of houses built to a similar design they offered an aesthetically pleasing or regular rhythm.  Victorian personal taste focused on the fireplace as the centre of their homes.  This was apparent in the various designs or quality of the pots.  Vast arrays of claywear pots were available at that era rather than the previous rather crude versions of the late eighteenth century.  Various images are featured on this site. [iii]

Prior to the construction of Irish cottages during the seventeenth hundreds inhabitants resided in round hut style dwellings built of wattle or daub but they had no outlet for smoke extraction.  The materials used later for cottages were sourced within a five-mile radius of the site.  Those homes had no foundations but were trenches filled with clay then stones or mud were used for support.  The floors were made from compacted clay or mud or in some region’s even flagstones.  Roof construction varied in regions with barged gables in the midlands while in north-western areas fully gabled walls were the norm.  In most area thatch roofs were constructed with weathen or oaten straw or of rushes, marram grass, heather or flax.  In rocky area like the Burren slate or stone may have been in use.  In fact, another less attractive roof covering was corrugated iron. The fireplace or hearth was usually centred in the main room of the house.  Usually fireplaces were made from stone, wattle or daub.  The hearth wall was very deep, it extended to the ceiling with the chimney stack protruding further through the cottage roof.  The use of fuel necessitated stone flues to protect from chimney fires.  Range fireplaces emerged during the eighteenth hundreds. [iv]

Chimneys pots made an appearance during the reign of George 111.  In several castles or tower houses the flues were simple openings in the parapet.  The role of the pot was fulfilled by slates or tiles set on edge in a bed of mortar.  Several of the early chimneys were shallow boxes formed from wattle & plaster that rose just above the roof.  It was during the second half of the nineteenth century before they became fashionable.  The inside of the flues was generally paraged or plastered until the end of the nineteenth century when ceramic liners became available.  There may have been a hood produced to exhale smoke over a turf fire. Original pots were made from cast iron, but the most popular type were vitrified clay ones.  The Hearth Tax also the change to fuel influenced the designs of the chimneys.  From that time pots were built with more durable materials of brick or stone. [v]

Several old house chimneys served a hearth on each floor with multiple flues that snaked through offsets within the masonry.  Well-built chimneys were parged with mortar to line the flue with clay tiles the standard liner since the 1900’s.  Clay flue tiles were round or rectangular ceramic units 24” tall stacked to make a liner with mortared joints.  Stainless steel flue liners are manufacture in flexible or rigid forms in a variety of alloys & designs. Rigid flue liners are available in diameters from 3-10 while flexible corrugated metal tubes are 2-10 in diameter.  Illustrations by Michael Crotiner with a photo by Paul Rocheleau features on this site. [vi]

The pumice liner system comes in a range of fifteen diameters from 150 m to 1000 mm internal diameter.  Theses pumice liners are used in masonry chimneys where the linings are surrounded by bricks, stones or blocks of 100 mm.  Installation is required to agree with building regulations.  Fifteen flue sizes are available that have lengths of 600 m to 1000 m with fewer joints.  This site features several sketches of various designs. [vii]

Basic extraction from fires in eons past were a hole in the dwellings ceiling.  Industrial chimneys were created to draw smoke by the Romans in their bakeries.  Domestic chimneys appeared during the twelfth century within Europe.  Ordinary dwellings would have had chimneys produced from mud, wood or plaster. Later bricks were placed around Liners. Chimney pots or venting caps were placed on top of ventilation shafts produced with clay, metal or masonry that isolated the hot toxic exhaust smoke or gases from fireplaces.  Vertical chimneys drew air in the combustion known as stack to ensure smooth flow of gases.  Several photos feature on this link including one by Gaudi in Barcelona. (Jan 2021 ) [viii]

Fletcher Valentine 1968 Chimney Pots and Stacks  is believed to have been the first specialized publication on the subject. [ix]

Ó Danachair Caoimhín  Béaloideas Hearth and Chimney in the Irish House  June-December 1946 (pages 91-107) (An Cumann le Béaloideas Éireann / Folklore of Ireland) one may read a preview or download at this link: https://www.jstor.org/stable/20522133?seq=1

This site features an image from Dublin by Mark Sawyer: https://www.alamy.com/stock-photo-a-row-of-chimney-pots-on-an-old-building-in-dublin-ireland-with-a-174012875.html