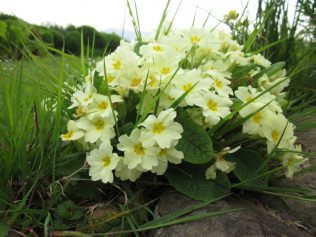 Only a year before we moved in, the site of the Dublin house that I grew up in was a field. Down the road, after the house was built and the developers had moved on, there was a scrubby patch of trees. They’ve disappeared now, under concrete and more housing. But when I was a child a spring rose in the scrubland, flowing briefly between two oaks and disappearing again among their twisted roots.

I remember hours spent swinging out over the water on a rope tied to a branch, and letting go at the crucial moment to land in squelching mud on the other side.That survival of the countryside, hemmed in by two roads, was a favourite playground for us local kids. We called it St. Bridget’s. And at the time I never asked myself why.

Wells dedicated to Bridget are found all over the country

I don’t know now if Bridget’s name survives there. But I know that for thousands of years before I swung out across that water, people had come there to pray. It was the site of a holy well.
Wells dedicated to Bridget are found all over the country. She’s a saint associated with fertility and healing; and with bees, birds, flowers and water. In the past, women prayed to her for help in childbirth. Water from her wells was used in healing, and Bridget’s crosses woven out of rushes on her feast day were hung over doorways, and in cow sheds, to protect households and farm animals. They’re woven here still every year.

St. Bridget’s day is February 1st. It’s still celebrated in Ireland as the first day of spring. And in many places here, even now, people still gather at holy wells to perform communal rituals passed down through generations.

Something is always left behind – a flower, a feather, a pin, a rag or a coin

The rituals vary from place to place but each contains elements that echo all the others. People circle the well, usually three, five, seven, nine or nineteen times, praying. They move in the direction of the sun. They kneel and take three, seven or nine drinks of water from their bare hands. Then circling begins again, each round marked by touching a stone or throwing a pebble into the water.

When people leave, they often take water away with them. But if they do, something is always left behind – a flower, a feather, a pin, a rag or a coin. You still see them fluttering in the wind or gleaming in the water. They’re gifts to remind the saint of the people’s prayers.

But they also embody the ancient belief that, for the universe to remain in balance, humans must make restitution for whatever they take from the natural world. Because thousands of years before the holy wells were dedicated to Christian saints, people here prayed beside them to a goddess.

New beginnings and the promise of plenty to come

In Corca Dhuibhne they called her Danu. Her name, which means ‘water’, is still echoed across Europe in rivers like the Danube and the Donn. She was the Good Goddess of the ancient Celts. To the ancient Celts, the holy wells were places where awareness of the energy of the universe was heightened, and ritual gatherings of the people could support its endless flow. For them, the feast day that’s now called St. Bridget’s was the start of the second season of the year. The first was Samhain, the time of darkness, when the earth is pregnant with hope.The second was Imbolc, when the fertile goddess gives birth to new beginnings and the promise of plenty to come.

Without water nothing can grow. So Danu was an image of fertility and hope. Her husband was Lugh, the sun-god. Their union ensured fertile livestock, rich harvests and good health.
Here in Ireland, Danu’s story has echoed down across thousands of years of mythology and folklore, sharing her symbols and images with the Christian St. Bridget. And for thousands of years people have circled the same springs of water here, asking for protection and help.

The well that I swung across as a child is buried now. I don’t know if anyone remembers its name. But it’s still there, linked to all the other hidden waterways that flow together in darkness, bringing life to the earth.

You can read more from Felicity on her blog here