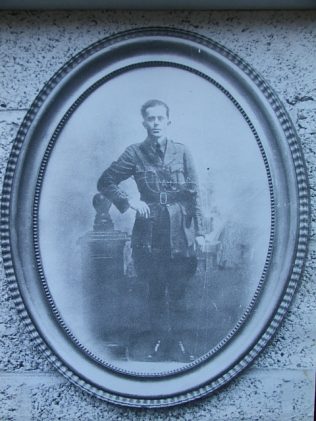 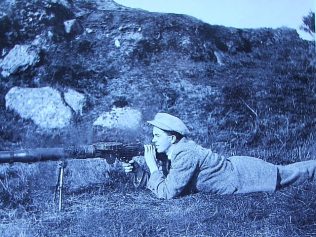 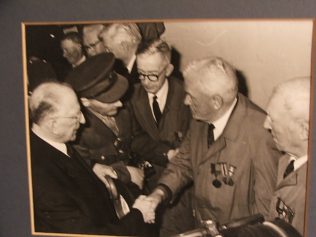 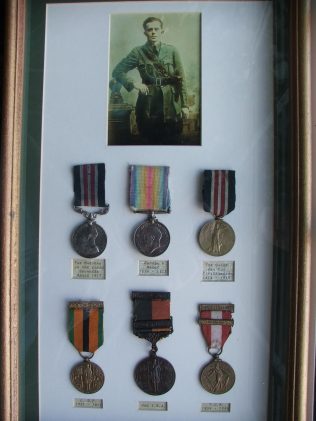 Three generations of the Horkan family visited the WW1 battle areas of northern France in April 2007, to be in Gavrelle, on April 29, 2007, 90Yrs. from the day in 1917 to mark the occasion when our father Paddy Horkan won his WW1 Military Medal, awarded for bravery in the field.

On earlier visit to The Island of Ireland Peace Park, in Messines, Flanders, Belgium, on an October evening 2003, made all we have read about the Great World War, very real. Visiting its lovely Irish Round Tower and seeing in the record-book there, that a Patrick Horkan of Swinford and Patrick Horkan of Foxford were killed in action and are buried in an unmarked grave somewhere in the Ypres Salient.

How fortunate are we, and our Horkan clan, that Patrick Horkan of Castlebar, survived that great conflict and made it home after that Great War. Looking out on the beautiful landscape, the Flanders Fields sweeping away from the Messines Ridge the site of this Irish Peace Park, the lines of John Mc Crae’s poem….

In Flanders Field the poppies blow

Between the crosses, row on row

That mark our places, and in the sky

Scarce heard amid the guns below…

In the distance the hills, over the French border, quite close-by is the village of Gavrele, where in 1917 Dad, Paddy Horkan from Castlebar was awarded the Military Medal for bravery in action, as stretcher bearer of the 14th Worchester, Pioneer Battalion, A Company of the Royal Naval Division, attached to the 63rd. Division, Anson Battalion.

Paddy Horkan was born in 1890 in Saddleworth, York, 3rd child to Peter Anthony Horkan and Alice (nee Coomey), Swinford, both had immigrated to Liverpool, where they meet and married. Working in the foundry in Saddleworth, Peter A. Horkan acquired the engineering skills to enable him return home, and find work in the new Swinford Waterworks; he later in 1898 applied for and was appointed as manager of the Castlebar Town Waterworks.

The outbreak of war, in late 1914, led to the shortage of plumbing materials and fitting and the return to England for Paddy Horkan in 1915, to become a  war volunteer in Worcester, to the new local Severn Valley Pioneers, a Naval Service Division, formed in the autumn of  1915 to enlist engineers and skilled workers, such talents were required in every regiment to keep the trench war machine moving.

The Severn Valley Pioneers Division was absorbed into the 14th Worcestershire Regiment, trained on the Salisbury Plains and embarked for war, at Southampton to Le Harve, France, marched to the city of Albert and from there saw action and were involved in front line action at the Somme, Vimy Ridge and the Battle of Arras.

I read as follows, in the Worcestershire WW1 records for the 1917 Battle of Arelux and of Paddy Horkan’s award of the Military Medal:

“By the time that all were in position, dawn had broken (1917, April 29.), and the battle was raging on all sides. Gavrelle lies in a fold in the ground. To the eastward a maze of German trenches stretches across low-lying ground. Those trenches had been taken during the previous day, but had been retaken by the German counter-attacks. On the low ridge immediately above the northern exits of the village a fierce struggle was raging around the ruins of a conspicuous Windmill, which was being stoutly defended by a party of Marines.

Just as A Company reached the British front line the Anson Battalion advanced in a renewed attack against the German trenches east of the village. A protracted struggle followed amid shell-fire, which rendered everything obscure.

The enemy attempted to follow up their success, but were met with a steady fire from the Worcestershire Company, which effectually checked any advance.

Meanwhile on the left, the Marines have gallantly held the Windmill.

Heavy fighting continued all day but died away at nightfall, leaving the 63rd Division, sorely depleted, in the trenches they had held before the battle, but with the captured Windmill secured as an advanced post.

“A” Company was admitted by all to have behaved splendidly(c);

(the c note says “for gallantry during the day two stretcher-bearers of the Battalion Pte P. Horkan and C. Rooke, were awarded the M. M.)

In that engagement, Paddy Horkan was a member of the 14th Worchester, Pioneer Battalion, A Company of the Royal Naval Division, attached to the 63rd. Division, Anson Battalion.

The battalion records of War Diaries entries, signed by Lt. Col. C.H. Gascoigne, give an each day a brief account of battalion’s activities; ( Lt. Col. Gascoigne was one of the 3 officers who sent letters of congratulations to Paddy, at home on leave to recover from injuries).

The War Diary entry for 25th May accounts of the news of the M.M. Award say:

“30363 Pte. Horkan P. awarded the Military Medal for at GAVRELLE on the morning of April 29th the men of the Coy. to which Pte. Horkan belongs whilst advancing over the open ground to a fresh position were caught in an enemy barrage. Several men were wounded and were consequently left on the top without cover.

Private Horkan, who is a stretcher-bearer showed great courage and devotion to duty in getting to these men under enemy fire, tendering their wounds, and eventually bringing them under cover.

He himself was wounded but returned to duty after getting the men to the dressing station and having his own wound attended to”.

“gives an account of the Gavrelle fighting and says“ this action was a defining moment in the Royal Naval Division as it was at Gavrelle that almost the last of the originals were killed off, those Gallipoli survivors and those who had just come back from wounds incurred at Beaucourt Gavrelle was the deathbed of the original RND.

The Division was rebuilt with men who had inherited a reputation, which they enhanced at Poelcappele, Welsh Ridge, and the Somme  and on the finial advance to victory when it breached the Queant-Drocourt line, the Canal du Nord, and with the 57th Division, helped capture Cambrai.

They had a unique esprit de corps, and constantly had to fight the Army as well as the Germans for its survival. The division was disbanded in early 1919, never to reform, so became a wartime only formation. During its short history it gained six VCs and suffered 45,000 casualties”, at Beaumont Hamel and Beaucourt”.

Paddy Horkan was wounded on three occasions and hospitalised at Pearl French and at Manchester, where he met the King on a hospital visit, on account of the military medal. After a visit home Paddy Horkan was inclined not to return to the War front, but followed his father’s advice, not to be listed as a deserter. His late return earned a court marshal charge, which he successful defended, stating the difficult war travel conditions in Ireland. Paddy Horkan also successfully defended a later court marshall charge on not attending a Sunday Church parade, by stating the Battalion only catered for the Church of England and they had not a catholic service.

After his last 1918 hospital leave in England, Paddy Horkan was advised on embarking back to the war front to apply for change to the 8th. Batt.  Worcestershire Regiment, as if he returned to his own 14th. Battalion he could be left in France on caretaking duty, for another year after the war ended.

After D Day Paddy Horkan took the choice of a 30 shillings on offer, instead of the demobbed Martin Henry Suit, issued to replace the military uniform.

Paddy Horkan returned to Castlebar and was soon contacted to become the training officer in the IRA West Mayo Brigade and take up arms against the English army, in the Mayo conflict.

Paddy Horkan advanced to Company Captain of the Castlebar A Company IRA, and of West Mayo Brigade for the 1919 – 2003 Civil War period, he later served as an LDF and FCA Company Captain, all that’s a story for another day.