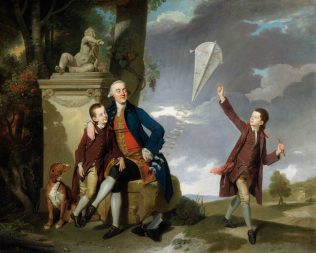 George Fitzgerald was the eldest son of Thomas who inherited the Turlough estate in 1747. He was a captain in the Austrian army in the service of the Empress Maria Theresa. He married Lady Mary Hervey, of an important Suffolk family, daughter of Lord Hervey Vice Chamberlain to George II.

They married in 1747 against the wishes of her family, who considered George Fitzgerald unsuitable being from a small estate. They lived at Turlough House, where their son George Robert (1748) and brother Charles Lionel (1750) were born. They separated in 1754 and Lady Mary returned to England with her two sons.

The eldest George Robert became the legendary ‘Fighting Fitzgerald’ the younger Charles Lionel succeeded to the Turlough estates and this is the line from which the current family descends.

Born in Turlough in 1748, George Robert lived some of his early life in London and most of his adult life in Turlough, Co. Mayo. He attended Eton college, joining the army in 1765 aged 17. At 18 he visited the French court as a protégé of the Comte d’Artois, the Kings brother but fell out of the royal favour by fighting duels and using loaded dice at the gaming tables of Versailles.

In 1770 George Robert married Miss Jane Connolly, daughter of Thomas Connolly, M.P., Castletown, Co. Kildare and sister-in-law of the Earl of Buckinghamshire. The Earl was lord Lieutenant in Ireland. However, the marriage was short lived and his wife died at a young age. One daughter from this marriage who was brought up by a relative, died in 1794, it is said of anguish on reading of her father’s fate in an old copy of the Gentleman’s Magazine. He later married Miss Sydney Vaughan of Carrowmore, Ballina, Co. Mayo.

In 1767 he was posted to Galway and fought a duel with a Captain Thompson and sustained a badly fractured skull which was believed to be the cause of his later irrational behaviours and numerous quarrels. He fought a numerous amount of quarrels in Ireland, France and England which left him scarred, battered and bruised. It was noted in Dublin that he would stand in the middle of the street forcing passers by to step into him or into the mud thus causing a challenge to be issued.

George Robert was a noted duelist. Among the more famous of George Roberts duels was the one with ‘Humanity Dick’ (Richard) Martin of Ballinahinch Castle, Connemara. Some of the details of their duel are recorded by Richard Martin’s daughter Harriet Letitia Martin, in her book, Canvassing.

Richard Martin was famously committed to the protection of animals and for this was nicknamed Humanity Dick. He also is reported to have fought over 100 duels with sword or pistol thus earning him another nickname, Hair-Trigger Dick. George Robert’s killing of the pet wolfhound of the Brownes of Westport House is said to have angered Humanity Dick. Martin also represented George Robert’s father in trial. He challenged Fitzgerald to a duel which ended with George Robert being shot twice. Although Martin was also hit, neither fell and both were helped away by their seconds to fight another day.

Another of his dramatic duels was with Caesar French from Clonbur, Co. Galway who was one of his father’s supporters. The duel took place in Castlebar. It commenced at one end of Main Street, and continued all along the street ending on Ellison Street, ending without fatality.

In 1783, George Robert joined the Volunteers or Irish Volunteers, alongside his uncle Frederick Augustus Hervey, Earl of Bristol, and Bishop of Derry, (1730–1803). The Earl-Bishop was somewhat unusual being an English nobleman who took a prominent part in the Irish Volunteer movement. George Robert FitzGerald, raised and commanded his uncles body-guard of light dragoons.

Local militias known as the Volunteers were established in late 18th century Ireland to defend Ireland from the threat of French and Spanish invasion. Invasion was feared because regular British soldiers had withdrawn from defending Ireland and sent instead to fight in the American War.

Family rows between George Robert and his father over financial affairs and debt continued over many years. They escalated when one of his father’s allies, Randal M’Donnell of Chancery defeated George Roberts attempts to be elected Colonel of the Mayo Volunteers. George Robert and two accomplices were found guilty of M’Donnell’s murder. On 12th June 1786 George Robert was executed at Castlebar, Co. Mayo.

George Robert Fitzgerald squeezed a lot into his 38 years until his hanging in Castlebar in 1786. As the went to the gallows he wore an old coat of the Connolly’s hunt of Castletown, a flannel waistcoat, old trousers and a old battered hat.

• BUTLER, Patrick. Turlough Park and the FitzGeralds. The Author, 2002: All

Oliver J. Burke’s Anecdotes of the Connacht Circuit, subtitled ‘From Its Foundation in 1604 to Close Upon the Present Time’