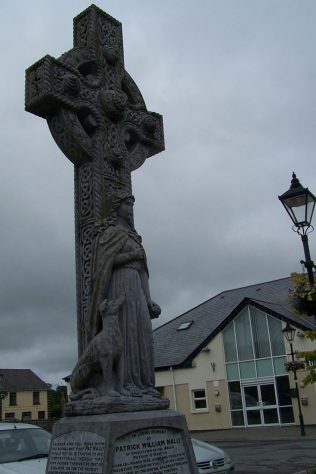 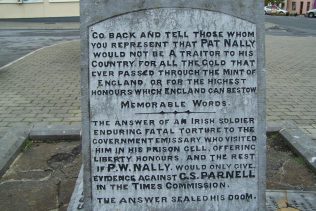 The Nally Stand originally in Croke Park, which is Ireland’s National GAA stadium,  was opened in 1953. However in 2003 it was moved to the Tyrone Club in Carrickmre. The stand will forever remember the heroic actions of a Balla native. Patrick W Nally.

Nally was born in 1856 in Rockstown House just outside Balla, Co. Mayo. His father William Nally was an agent for the local landlords Lynch Blosse family who owned extensive lands in Balla and Claremorris. They also owned Rockstown house which subsequently became the property of the Nally Family. Although this job of Landlords agent would not have ensured popularity for William Nally with the local tenants, it is believed that he was a Fenian sympathiser and supported his sons’s involvement.[i]

Nally was educated in St Jarlath’s College Tuam, he had always been interested in Fenianism but while in Tuam he was able to make contacts which enabled him to become a very valued member, and he was only 22 when he became the Connaught representative of the IRB (Irish Republican Brotherhood). He will be remembered for his actions as a Fenian during the Land League here in Mayo.The principles of Fenianism were anti-British rule and Independence for Irish tenants. The Fenians set up smaller organisations in the US and in some parts of Britain and in some cases they were able to gain financial support and supply of arms from the US. So Patrick Nally like some of the other well known Fenian organisers, had to go into hiding at times from the British Authority as they attempted to suppress the leaders in fear of revolution.[ii]

Nally was well known for his athletic skills, and was initially involved in the organisation of local sports events. In 1879 the Nally’s had a local sports event open to all participants which was unusual for this time, as it was usually the elite or landed gentry who played organised sports. [iii] Charles Stewart Parnell was the patron of the event. It proved to be a very successful event and was repeated. It is also felt that he was influential in setting up the GAA though he was not alive when the organisation was founded. The GAA was based on Nally’s principles, e.g. anti-establishment and inclusive of all classes.

In 1884 Patrick was arrested for gun running and conspiracy to kill or attack some Landlords, he was given a sentence of 10 years penal servitude. His trial was well publicised in local and national media and his theories that his accusers were rewarded were discussed locally.

PW passed away while in imprisonment in 1891, just weeks before he was to be released. It was said that he died of typhoid fever though other suggestions of foul play were also perceived. [iv]

Patrick Nally was laid to rest in in the MacManus plot in Glasnevin Cemetery. His coffin was draped in the Flag that was also used for Charles Stewart Parnell who died a few weeks earlier.

A large monument was erected in 1900 in Balla Market Square to celebrate the heroism of P.W Nally. It is a fine monument to this day and is the centre-piece of this Mayo town. Today one can see some markings of bullets where there was an attempt to damage the monument during the Civil War.