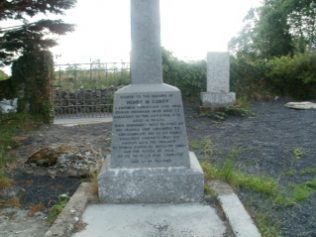 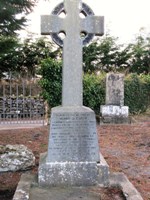 Henry M. Curry was born in ‘New Dublin’, a small cluster of homes in the townland of Deerpark Upper, Belcarra, Castlebar in 1828, the son of local farmer Michael Curry (d. 22 June 1829 aged 46) and his wife Margaret ((known as ‘Peggy’) Pierce. (D. 6 April 1870 aged 76) They worked a very small parcel of land and were tenants of Colonel St. George Cuffe of Elm Hall House nearby. The Curry home has been described as ‘a hut by the roadside’. With his siblings and widowed mother he survived the Famine years and went on to become an important leader of the Fenian movement in Connaught.

An intelligent youngster, he attended the free school at Errew Monastery (three miles away) where he was taught by the Franciscan Brothers – some of whom had strong nationalist leanings. He became an apprentice teacher and later when Michael Farrell, a teacher at Belcarra National School emigrated to America, he was replaced by Henry Curry. (Michael Farrell was later ordained a priest in America.)

Curry married Anne Dowd on 8th November 1854. His sister Catherine (d. Dec. 1855 aged 26) had married local tailor John Nestor just six days earlier. Anne Dowd, Henry Curry’s wife, was reputed to be a talented quilt maker earning a small income from her trade. They had a family of boys and girls one of whom, Michael, became a talented carpenter who was recruited to work on the roofing of Breaghwy House.

At 18 years of age Curry enlisted in the Fenian Brotherhood the oathbound ‘secret society’ dedicated to achieving Irish independence through force of arms, and he became an important organiser of the movement west of the Shannon. Known as a strong and courageous leader, he travelled many miles on foot around County Mayo enrolling new members, and organising Fenian activities in preparation for a Rising. It is recorded that, leaving his school one Friday evening, he walked to Ballaghaderreen, Co. Roscommon and walked home again in time to resume his teaching duties on Monday morning.

Henry Curry’s aunt, Mrs. Dunne, owned a tavern in Castle Street, Castlebar. A premises which was regularly used as a ’safe’ venue for Fenian meetings. But the Royal Irish Constabulary in Castlebar had Curry in their sights and, one day, an Inspector Pepper, with a contingent of R.I.C. constables entered his schoolroom in Belcarra, handcuffed him and had him transported by long-car to prison in Spike Island, Co. Cork where he spent many months. He was replaced by another young teacher, Michael Chalke of Carrowjames.

Through the good offices of influential people like Patrick Daly of Belcarra and Conor Power, M.P. for Mayo, the authorities in Dublin Castle were finally induced to release Curry and he returned to Belcarra.

Because the Fenian movement was a ‘secret society’ its members were automatically excommunicated by the Catholic church. Consequently, upon Curry’s release, Canon Gibbons, the Parish Priest, refused to allow him to return to his teaching post. He was unemployed!

Henry Curry then opened a private pay-school and taught students in his own cabin in Deerpark Upper. Pupils paid one shilling a quarter for their tuition. Many of his former pupils at Belcarra National School enrolled at Curry’s ‘hedge school’. Some of these students worked on his father’s farm in return for their tuition.

Failure of the Fenian Rising

Having laboured for the cause for such a long time the ultimate collapse of the Fenian Rising in 1867 left Curry very disappointed. He regretted that the units of the organisation which he had so carefully nurtured were unable to take part in the Rising.

He spent his last years with his wife and children in ‘New Dublin’. On his death-bed the local Catholic priest was invited to administer the last rites. As a precondition the priest insisted that Henry Curry renounce his revolutionary Fenian ideals. Curry resolutely refused to do so and died without receiving the last rites of his church.

When he died at the age of 48 many Fenians travelled to the funeral. He was laid to rest in Elmhall Cemetery nearby. In 1898 his admirers erected a Celtic cross on his grave with an inscription which reads:

“Sacred to the memory of Henry M Curry, a faithful Christian and true-souled Irishman who died at Belcarra on 20th April 1876 aged 41 years . This Monument was erected by his friends and admirers, to commemorate his many noble qualities, particularly his ardent love for Ireland, in whose cause he suffered much and for which he was ready to make any sacrifice. God save Ireland”

Writing in 1938 a local scribe had this to say:

“Henry Curry died but his spirit lives. Many an old man here will proudly and reverently tell you: ‘I went to school to Henry Curry.’ And in the recent War of Independence his name and example helped to cheer and sustain the volunteers of Henry Curry’s native parish to bring to a conclusion the good work he gave his life for.”

After Henry’s death his wife Anne and her entire family emigrated to the United States of America. One of the Curry daughters in America married a Loftus man who had been born in Belcarra. The whereabouts of Henry Curry’s descendents in America are unknown.