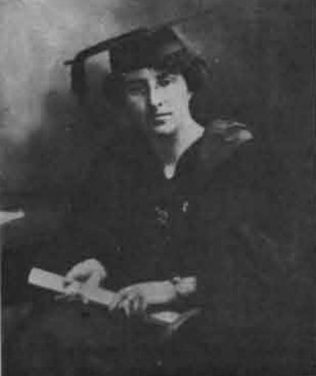 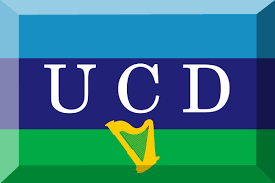 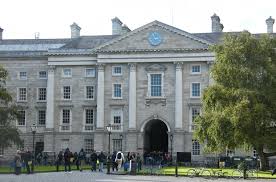 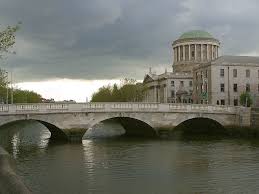 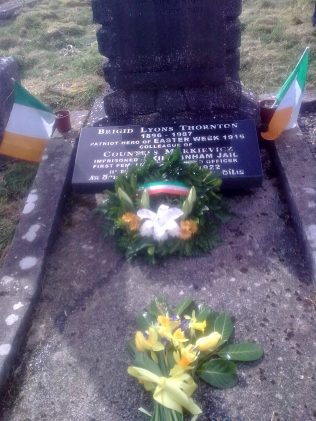 Dr. Brigid Lyons was a fearless nationalist who was the first woman officer in the Irish Free State Army.  She pioneered the ‘BCG Vaccination’ in Ireland.

Brigid Lyons was born in Northyard, Scramogue, Co. Roscommon during 1896.  She was a daughter of Patrick Lyons a farmer also a noted Fenian. [i]

Her academic talent was evident as a young child when she won a prize for best Irish speaker in her school.  Following her mother’s demise she went to live with a nationalist family her uncle, Frank Mc Guinness & her aunt Kate in Longford.  They contributed to her education at a secondary school in Sligo.  Brigid Lyons won a county scholarship to study medicine in University College Galway during 1915. (She stayed at digs at Maud Kyne’s house on Francis Street, Galway that turned out to be ‘warm, hospitable and chatty’) (Rachel Sayers) [ii]

Following her illness with T.B. Then decommission from the army during 1925 Dr. Brigid Lyons was sent to Switzerland to recuperate.  While there she learned how to treat patients with that ailment. [iii]

Dr. Brigid Lyons met her future husband Captain Eddie Thornton of Toomore, Co. Mayo in Switzerland. Their marriage took place at St. Kevin’s church in Dublin’s Pro–Cathedral on 10th October 1925.  She qualified as a doctor with a postgraduate diploma from U.C.D. during 1927. [iv]

In the following years of Home Rule / WW1  Brigid Lyons became very involved with the nationalist movement.  She smuggled money, gold & guns to fund the ‘cause.’  Along with her fellow Cumann na mBan women they kept ‘morale high…. With parcels, protests and letters.’  Brigid Lyons was one of the most active Cumann na mBan women as she sent parcels & corresponded with  prisoners.  [vi]

During April 1916 while visiting Dublin Bridget Lyons volunteered to attend at the front line where she administered to the wounded at the Four Courts also in adjacent streets.  She was involved with North King Street / Church Street areas where she operated a first-aid post also a canteen for the volunteers.  She was awarded gold sovereigns for her efforts which she stitched into her dress in case of arrest.   [vii]

During Ireland’s Civil War Dr. Lyons Thornton was given responsibility for the welfare of the female political prisoners in Kilmainham Goal. [viii]

Along with her colleagues among the volunteers she was incarcerated in Richmond Barracks. Following her release she had changed…she recognized  that only a Government by the people for the people would solve Ireland’s problems.  Shortly before her demise: Dr. Lyons Thornton described to John Cowell (a retired colleague in the Irish health service) her experiences while incarcerated in Dublin: ‘which make it harder for me, and often extremely embarrassing. Grace Plunkett, Joseph’s Plunkett’s widow, was brought in….Then Anne Mac Swiney, sister of Terrance Mac Swiney, went on hunger strike and nearly broke my heart… But the crowning tragedy came one night when I was called to see a new prisoner.  Of all people, it was Mrs. Tom Clarke.  She was hurt to meet me there, and I was hurt to meet her.  In every way it was all too, too cruel.  She would never forget the misery in those awful dungeons.’   During her later years Dr. Brigid Lyons Thornton was tormented by the bleak words spoken by Mrs. Clarke of ‘We meet in strange places.’   [ix]

She supported the Treaty side in Ireland also she played a very significant role in the Foundation of the Army Medical Corps.  Dr. Brigid Lyons Thornton was the first female Irish woman to be commissioned as a 1st Lieutenant in the Medical Corps of the Irish Free State Army by Michael Collins during 1922. [x]

Also she stated that ‘as a Commissioned Officer I was never faced with a single duty that I felt incapable of seeing through successfully.’  [xi]

Dr. Brigid Lyons Thornton contributed an article to An Cosantoir  November 1975 titled Women and the Army.   She argued for a Women’s Service Corps within the National Irish Army.  She referred to the fact that no photo of her in her army uniform was ever taken by personal.  She stated that when she applied for the usual uniform allowance, she did not receive one!  She wrote that ‘somebody suggested that I should wear kilts and a short cape.’ [xiii]

Dr. Brigid Lyons Thornton entered the Public Health Service in Co. Kildare prior to moving to Co. Cork.  Later she returned to Dublin where she practiced as a paediatrician with Dublin Corporation Public Health Service until her retirement.  She carried out research in Switzerland & Nice.  She was instrumental in pioneering the ‘BCG’ vaccination during the 1950’s.  She also lectured on public health. [xiv]

Following her retirement Dr. Lyons Thornton worked as a librarian & volunteer within the Rotunda Hospital also as a researcher in Trinity College Dublin. [xv]

Dr. Brigid Lyons Thornton’ demise occurred when she was ninety-one years on the 15th November 1987 (according to this link she passed from died of cardiac-respiratory arrest)  She was interred on Easter Monday in Toomore Cemetery Co. Mayo.  Her coffin was draped with the Tricolour.   Members of the Western Command rendered Military honours at the graveside. [xvii]

Her life has been documented in A Noontide Blazing  by Dr. John Cowell.  Also by Dr. Anne Mac Lellan in Ireland’s Unmanageable Medical Revolutionaries.  (NBC)

A new Housing Development – Thornton Heights – in Inchicore Dublin of seventy-five houses with apartments was opened by the President of Ireland, Dr. Michael Higgins on the site of the Richmond Barracks (earlier yet St. Michaels Estate & Keogh Street) during early 1973.  He described Dr. Lyons Thornton as a remarkable woman who worked for the welfare of Irish citizens also that most remarkable among her achievements was her fight against Tuberculosis among Ireland’s poor along with her role in the pioneering of a BCG Vaccination Scheme during that 1950’s that contributed to Ireland’s end of the plague.(9th September 2014) [xviii]

Dr. Anne Mac Lellan in Ireland’s Unmanageable Medical Revolutionaries  stated that this extraordinary Irish women were involved during 1916 Revolution: especially on the republican side.  Kathleen Lynn, Ada English, Dorothy Stopford also Dr. Brigid Lyons Thornton were all from the medical profession with a concern for the social issues & poverty of the time.  Each took a unique path to their passionate work for Ireland. [xix]

On 27th March 2016  (as part of the 1916 National Commemorations)  Dr. Brigid Lyons Thornton was honoured at Toomore graveyard in Mayo.  A wreath was laid by a relative Seamus Thornton. Members of the Irish Army included four female NCOs were also in attendance.  She was honoured that year in various exhibitions within Ireland.  (NBC)

References to Dr. Brigid Lyons Thornton may be viewed in the following  publications:

James Langton called her The Heroine of the War of Independence  in the Irish Volunteers Commemorative Society. [xxi]

Kenny Liam’s A Brigid of the 20th Century  referenced the Rebel, Soldier & Doctor-Dr. Lyons Thornton in The Irish Emigrant.   Later it was published in The Leinster Leader on 11th June 1990. [xxii]