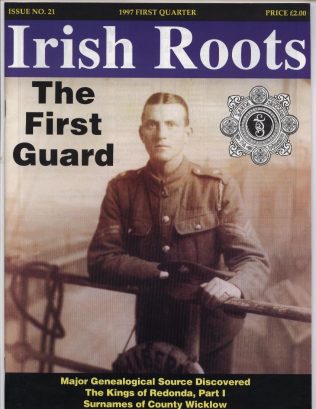 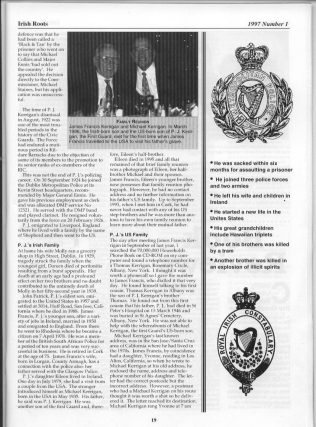 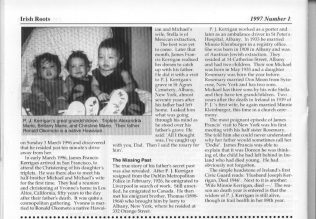 P.J. Kerrigan was born on 12th September 1892 in Fair Green, Westport, Co. Mayo, the son of Patrick and Mary Ellen Kerrigan. Patrick had worked as a postman in Westport for 44 years and retired in 1920. He died on 13th June 1947, aged 79 years and Mary Ellen died 16 days later aged 85 years. They are buried in Aughagower Cemetery, Co. Mayo.

P.J. Kerrigan had 3 brothers Michael, Frank and Thomas who emigrated to the U.S. and settled in New York. His 2 sisters also emigrated to the U.S. 2 of his brothers worked in the N.Y. Police Dept. and were allegedly killed on duty. One was knocked down by a tram and the other was killed in an explosion while carrying out a search in a warehouse for illicit distillation, when a lamp he was carrying ignited the illegal spirits.

In 1913 P.J. Kerrigan attempted to enlist in the R.I.C. He was 5ft 8 and a quarter inch tall. He was recommended by district inspector Thomas Neylon. His trade at the time of the application was given as a sawyer. O’Malley’s saw mill was only 6 doors away from his home in the Fair Green.

On 7th March 1914 having completed his recruitment training at the R.I.C. depot in the Phoenix Park he was allocated to Co. Meath. After 8 months he resigned voluntarily to take up position in the army, where he joined the Irish guards and was promoted to rank of Corporal. He is believed to have worked as a training instructor.

P.J. married Molly Finnegan from South Quay, Drogheda, Co. Louth whose father, Patrick Finnegan was at one time a ship’s captain owning his own schooner and later a coal importer. P.J. & Molly had 4 children, 2 boys and 2 girls.

P.J. was the first of 4 Civic Guards to enlist on the first day of recruitment on 21st February 1922 at the Royal Dublin Society Show-grounds. He was assigned Garda reg. No. 1. Five weeks later he was promoted to the rank of Sergeant.

Dismissed From the Force

On 7th August 1922, P.J. Kerrigan’s Civic Guard career came to an abrupt end when he was dismissed from the force for allegedly striking a prisoner named O’Brien, alias Thomas Lynch, at Portabello Barracks, Dublin. His defence was that he had been called a ‘Black & Tan’ by the prisoner. He appealed the decision directly to the commissioner, Michael Staines, but his application was unsuccessful.

This was not the end of P.J’s policing career. On 30 Sept 1924 he joined the Dublin Metropolitan Police at its Kevin Street headquarters, recommended by major General Ennis.