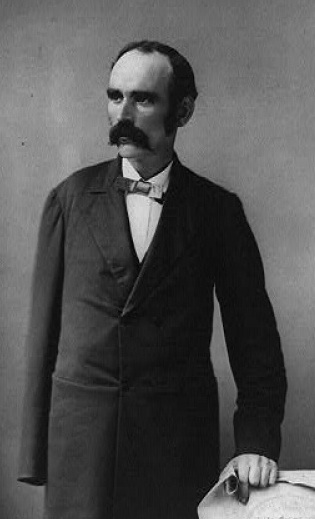 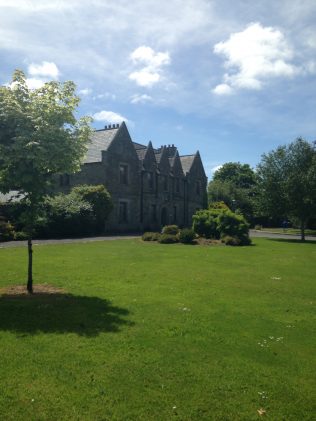 zoom
Swinford Workhouse today, this is where the Davitt family sought refuge before going to England
Author Personal Collection 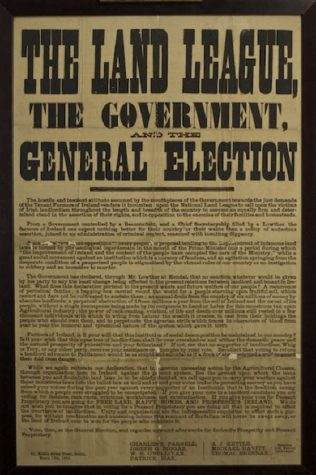 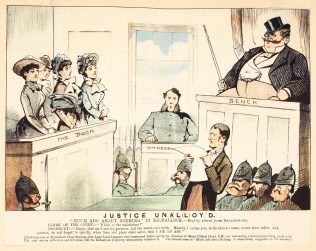 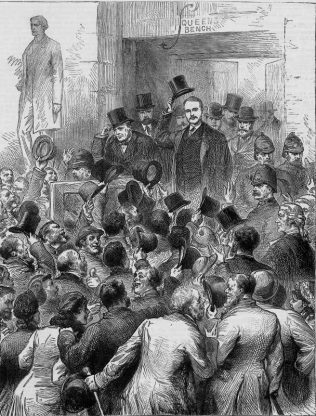 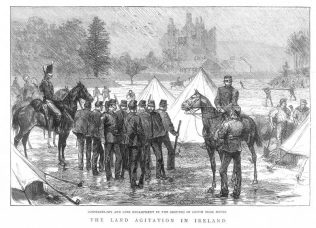 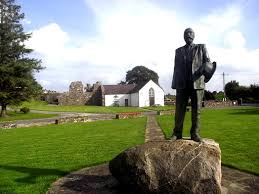 zoom
Michael Davitt Museum in Straide, Foxford, near to the home of Michael Davitt from where he and his family were evicted
plus.google.com 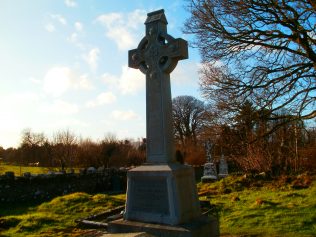 The life, work and achievements of the greatest Mayo man, and perhaps one of the greatest Irishmen, ever to have lived cannot be captured in any summary such as this, so no attempt will be made to do so. Rather, the reader is directed instead to  the many excellent biographies of Davitt that have been written by Francis Sheehy – Skeffington, Carla King and others and a selection of which are listed below. Davitt dedicated his life to furthering the interests of Irish tenant farmers and played a significant role in securing the legislative changes at Westminister in the latter part of the 19th and early 20th Century that enabled tenant farmers in Ireland to secure the freehold to the land they had farmed as tenants for countless generations. Davitt is best known for his role in establishing the Land League but he was also a prolific writer, journalist, traveller, advocate of social justice and the rights of workers. Davitts slogan was: “the land of Ireland for the people of Ireland.”

In common with many rural people in Mayo in the mid-19th Century, Michael Davitt’s early years were passed under the persistent dark clouds of poverty, hunger, eviction and mass emigration. Davitt was born in Straide on 25 March 1846 into the nightmarish and apocalyptic world of the Great Famine. His parents Martin Davitt and Catherine Kielty had four other children and the family were, in common with the vast majority of the local population, poor. In 1850 they suffered the same fate as many other families in Mayo when they were evicted from their home on the Knox Estate. They made their way to the Workhouse at Swinford initially but when it was clear that the family could not be kept together they left Mayo and travelled via Dublin and Liverpool to Haslingden in East Lancashire where they settled. There they joined many other Irish families who had suffered a similar mis-fortune and traded the poverty and hardships of rural Ireland for the poverty and hardship of industrial Britain. Davitt spent some time in school and at the age of nine joined the ranks of the thousands of child labourers who collectively helped turn the cog of the British industrial machine. At the age of eleven he lost his arm to a horrendous work place accident when it became trapped in a spinning machine and had to be amputated. Ironically the accident took Davitt down a different and more promising road. With the assistance of benefactor John Dean, Davitt attended a Wesleyan school and evening classes at the Mechanics’ Institute and progressed his education. Employment followed at a post office and Davitt learned the trade of typesetting. During this time Davitt developed a keen interest in Irish social affairs and history.

In 1865 at the age of 19 Davitt joined the IRB and quickly progressed within its ranks. He organised arms trafficking to Ireland and in 1867 avoided capture following a failed attack on Chester Castle. On 14 May 1870 he was finally captured in Paddington Station while expecting a delivery of weapons. Convicted of treason he was sentenced to fifteen years in prison. The sentence was to be served in Dartmoor. He suffered dreadful hardship while in prison but was released early under a Ticket of Leave on 19 December 1877 following an amnesty secured by, amongst others, John O’Connor Power MP. He returned to Ireland and became a member of the Supreme Council of the IRB. In 1873 he visited his family who were now living in Philadelphia, Pennsylvania.

He returned to the US in 1878, and participated in a lecture tour to raise money. He met Clann na Gael leader John Devoy and found the latter’s thoughts on a ‘New Departure’ for Irish politics of interest. The notion that nationalists such as the Fenian movement should, in the interests of the nation, support elected representatives to further Ireland’s cause both at home and at Westminister made sense to Davitt.

From the perspective of tenant farmers in Mayo, Davitt’s return home to the County in 1879 could not have been better timed. If Davitt had any memories of his childhood in Mayo before he was taken to England in 1850, the state of the rural population of Mayo of 1879 must have been a source of deep concern for him. In 1879 a combination of an economic depression in England with its inevitable knock-on impact on its nearest neighbour, as well as persistent bad weather, had left Ireland on the brink of another catastrophic famine. Davitt at once became involved in land agitation.

Monster meetings were organised to protest against the actions of landlords and to seek reduction of rents. Most notable of these was a large meeting at Irishtown attended by several thousand people and directed at Canon Ulick Burke, a Catholic priest and landowner. Davitt was not himself in attendance. There is some debate as to whether the Irishtown meeting was the idea of Davitt or Belcarra man James Daly. Both men gave a conflicting account of their role in the organisation of the event. Whatever the truth of the matter, the demonstration achieved its stated purpose locally when Canon Burke desisted in his drive to evict tenants and reduced rents. The demand for similar demonstrations across Mayo and Ireland grew.

On 2 November, 1879 Davitt addressed a land meeting at Gurteen, County Sligo, stating publicly that: “…the time has come when the manhood of Ireland will spring to its feet and say it will tolerate this system no longer”. James Daly who was also present added that “if anyone was evicted it was the duty of his fellows to assemble in their thousands and reinstate him the next day.” James Bryce Killen concluded his speech by wishing that “everyone at the meeting were armed with a rifle”. On 19 November Daly, Davitt, and Killen were arrested on a charge of using seditious language. Their arrest led to mass protest meetings and Parnell used it to launch a propaganda drive in Britain and the United States. The three were not convicted at their trial in Carrick-on Shannon and the government suffered a significant embarrassment. Davitt, Daly and Killen became known as “The Gurteen Three”.

As an organisation the Land League campaigned for land reform and tenants’ rights. It provided relief to tenants in distress and targeted landlords engaged in evictions as well as seeking rent reductions. The success of the League is evident from the campaign of ostracism orchestrated against Charles Boycott in 1880 and which resulted in Boycott vacating the estate he managed in Mayo for Lord Erne. The intense pressure applied by the Land League left the Westminster government with no choice but to introduce legislation to address the demands of Irish tenants. In 1881 Gladstone’s Land Act put into law the League’s central  demand or the ‘three Fs’ as it was known: Fair Rent; Fixity of Tenure and Freedom of Sale. But the League was not finished and it continued to press for further reform.

In 1882 Davitt was elected as an MP for County Meath but was excluded by special writ of the House of Commons due to the fact that he had been imprisoned in 1881. When he was released from prison in 1882 he again toured the United States on a fund raising expedition for the Land League with William Redmond. He was back in prison in 1883 and his health began to fail. His election as an MP for North Meath in 1892 was set aside. He also served as an MP for North East Cork (1892); East Kerry and South Mayo (1895 – 1899).

Davitt believed that an alliance with and the support of Parnell was essential if Davitt’s and the League’s objectives were to be met. They co-operated in setting up the Irish National Land League, the Liberal Alliance and in the fight for Home Rule. However, when Parnell’s leadership of the Irish Parliamentary Party was challenged as a consequence of the Kitty O’Shea divorce case, Davitt was critical of Parnell and  supported the anti-Parnellite Irish National Federation offshoot in Westminster.

In 1890 Davitt founded a penny weekly ‘Labour World’. The paper was initially successful but then went into decline and the final edition was published on 24 May 1891. Similarly his efforts to organise agricultural workers into the Irish Democratic Trade and Labour Union were also unsuccessful. Davitt did not support the Boer War. He travelled to South Africa in support of the Boer cause. On 25 October 1899 he resigned his seat at Westminster in protest against the war.  In 1902 he published ‘Boer Fight for Freedom’. Davitt was unhappy with the mechanism established under the Wyndham Land (Purchase) Act 1902 because it required the new freeholders to pay for their land over time. Davitt’s concept of land nationalism did not countenance any payment by the tenants. In 1903 when William O’Brien founded the United Irish Land League he did so with the support of Davitt.

In 1886 Davitt married Mary Yore of St. Joseph Michigan, United States.  15 years his junior, Mary was the daughter of John Yore. The couple returned to Ireland and lived in a Land League cottage at Ballybrack, County Dublin. The couple had three boys and two girls. A daughter Kathleen tragically died of TB in 1895. Davitt himself died of blood poisoning at the age of 60 in hospital in Dublin on 30 May 1906. In excess of 20,000 people filed passed his coffin at the Carmelite Friary, Claredon Street, Dublin before his remains were carried by train to Foxford, County Mayo. He is buried at Straide Abbey, Straide County Mayo. His birth place is now a museum.