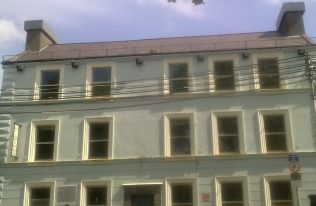 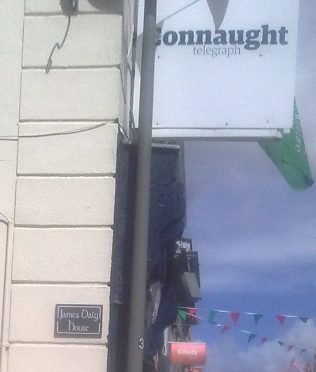 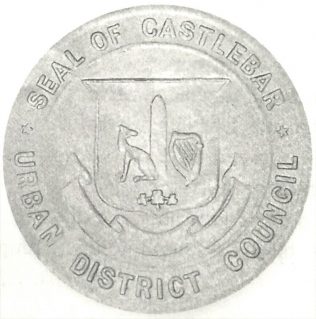 This Irish nationalist was a strong defender of tenant’s rights.  He founded the Irish Land League in Castlebar. He was newspaper editor, farmer also a local politician.

James Daly was born the eldest son of eight children into a farming family during 1838 at Cloonabinna, Boughadoon, Co. Mayo. Shortly following his birth the family moved to Coachfield, Belcarra. By the standards of the nineteenth century the Daly family were relatively prosperous as they held interests in four different farms that including one at Ballyshane, near Breaffy. [i]

He had a brother Charles.  He had a son James: later an accountant with Mayo County Council. [iii]

He was married & had one son also two daughters. [v]

James Daly  received his education from the Franciscan Brothers at Errew Monastery. [vi]

He was educated at national school also at the Franciscan Friary at Errew near Castlebar. [vii]

During the 1840’s & 1850’s James Daly acted as bailiff.  He leased one hundred & twenty acres of pasture on Harriet Gardiner’s estate in the parish of Breaghwy in the 1860s.  He held stock farms throughout Mayo until the 1900’s. [viii]

His political career began during 1869.  He won a seat on Castlebar Board of Guardians in the Breaffy Electoral Division.  In later years James Daly succeeded his father as a guardian for Litterbrian, Ballina Division.  He served on Castlebar Urban District Council  also Mayo County Council. [ix]

James Daly’s first venture into politics occurred during May 1869.  He won a seat on the Castlebar Poor Law Board following his father’s demise. [x]

In 1875 James Daly set up public meetings near Castlebar in order to raise money for the erection of a monument to French soldiers who were killed during 1798. [xi]

James Daly helped to establish a Mayo Farmers’ Club on 26th October 1878.  They proposed to ‘secure the tenant farmers of Mayo against capricious eviction & rack-renting.’ [xii]

As a defender of local tenants James Daly published articles of their grievances in his newspaper.  Following 1878 he abandoned this policy then publicly organized Meetings. This resulted in the formation of the Irish Land League at Daly’s Hotel, Castlebar, Co. Mayo. He organized meetings both in Louisburgh during 1875 with a further one in Westport on June 8th 1879.  During 1879 Daly was elected chairman of Westport Land League meeting at which Parnell & Davitt were speakers. [xiii]

The origins of the Irishtown Land Demonstration have been enveloped in controversy since the publication of Davitt’s memoirs (1904) but he was clearly the principal organizer.  James Daly presided at the meeting in Claremorris on January 1879. it was made memorable by the enthusiastic attendance of about 10,000 people.  Also his declaration that ‘land-grabbers’  were as culpable as unjust landlords.  The Telegraph  broadcast the claims & demands of the meeting within Connacht.  On 8th June Daly chaired the Westport meeting at which Parnell spoke.  Daly participated in over one hundred land meetings throughout the west between May 1879 & May 1880. [xiv]

Again during 1875 James Daly appealed for tenant organization & solidarity in the west; where bodies such as the short-lived Tenant Defence Association (TDA), that he had helped form in Louisburgh had traditionally been scarce & unassertive.  The last major episode in which James Daly participated  specifically in the Land League campaign was the ostracization of the farm & household of Captain Charles Boycott of Lough Mask during September / October 1880.  He personally intervened to maintain calmness. [xv]

James Daly was delighted to testify at the Bessborough Commission of Inquiry during August 1880.  Though it was boycotted by the Land League: he amassed a large amount of evidence in support of injustices on Mayo estates.  The Telegraph  published accusations that the League was composed of ‘self-seeking men ambitious for notoriety’  during June & July. [xvii]

James Daly became vice-president of the Land League of Mayo on August 16th.  In that same year 1879 on October 21st he was elected to the Irish National Land League Committee at its foundation in Dublin. [xviii]

He obtained a place on the executive committee of the National Land League of Mayo that was established in the family hotel in Castlebar on 16th August 1879. Manifesto called for peasant proprietorship. [xix]

James Daly became part-owner with Alfred O’ Hea of The Connaught Telegraph newspaper.  During 1879 with the demise of O’Dea he became proprietor & editor.  He was credited with being an exemplary editor. James Daly sold the business to an employee T. H. Gillespie during 1888. [xx]

Together with Alfred O’Hea James Daly purchased during February 1876 The Connaught Telegraph  newspaper.  James Daly resuscitated The Connaught Telegraph (a Castlebar weekly newspaper defunct since 1870) primarily ‘to advocate the cause of the poor struggling tenantry’.  Stern editorials called for Mayo farmers to imitate a robust tenant association set up in Ballinasloe during May 1876 by radical local Fenians.  Both editors participated in the association.  They also appeared on the platform at public meetings.[xxi]

He returned to his family’s origins of full-time farming. [xxiii]

James Daly continued as a highly active member of the Castlebar Board of Poor Law Guardians.  He served in positions as vice – chairman in 1881/ 2 also acted as chairman during 1892 to 1898).  He was a member of Castlebar Town Commissioners.  Late he was elected for the Castlebar Urban District Council from 1899 to 1908.  Between 1896 & 1898 he launched committees for the commemoration of the 1798 rising in Connacht.  He addressed  the public for the United Irish League as they advocated the redistribution of large ranches to small farmers. [xxiv]

“I am a Land Leaguer myself – I would not be a Land Leaguer if it had anything behind it like Revolution.’’  I would fight against it.” (To the Bessborough Commission, 1880) also “Truly is the dawn of freedom appearing – truly the emancipation of the tenant farmers of Ireland. The South is awakening but surely.”  From The Connacht Telegraph  6th December 1879 that followed his release from Sligo prison re comments at Gurteen. (See article Gurteen Three)  [xxvi]

Moran Gerard 1992 The rise and fall of the  Land League in the west of Ireland 1879-1882 published in Irish Historical Studies  November 1994 vol 29 no. 114 (Cambridge University Press) (pages 189-207)  Moran stated that ‘His input into activities which changed the course of Irish history has never been fully recognized.’  The edition may be viewed at this site. [xxvii]

Jordan Donald 1994 Land and popular politics in Ireland: County Mayo from the plantation to the land war

Tom Gillespie in his column The County Town  in The Connaught Telegraph 17th March 2020 referenced James Daly: also his contribution to the Land League & his career as editor & proprietor of ‘The Connaught Telegraph’ newspaper.  He described him as ‘a staunch Catholic conservative totally against violence & drink, especially poteen.’  (NBC)

Johnny Mee in his column Auld Stock in The Connaught Telegraph  28th September 2021 ( (page 27) referred to this year as a ‘Time to honour James Daly.’  (NBC)