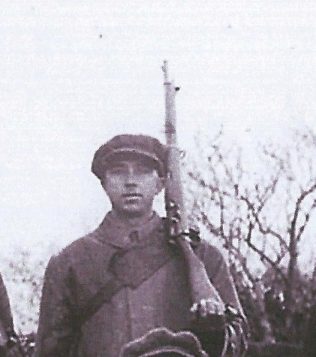 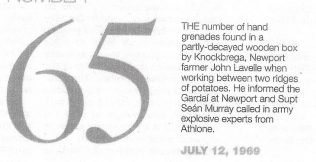 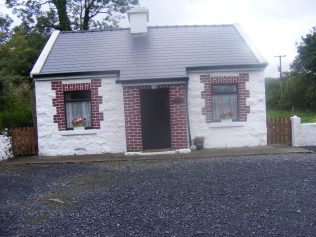 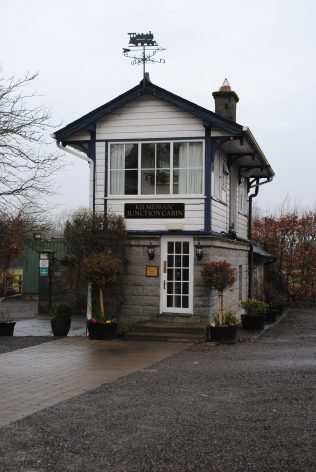 John Lavelle of Knockbreaga and Cleveland

I was born in 1939 in the townland of Knockbreaga, Newport, Co Mayo, I received my education in nearby Knockloughra N.S. and Vocational School in Westport. After that I attended agricultural courses locally and took on the running of my parents’ farm when my dad died in 1960. Little did I think then that I would be a Maintenance man in a Bank and married in Cleveland in 1976. A young girl Maureen Cooney, whose mother Mary O’Boyle married Joseph Cooney whose father came from Achill Island, in Cleveland, used to visit the home of her grand-parents- Martin O’Boyle and Ellen Walsh next door to me, and we got acquainted. Maureen’s uncle, John P. O’Boyle was a member of the Tiernaur Company of the old IRA.

Finally I took a holiday to Cleveland to visit Maureen and her mother in June 1975 and stayed for six weeks. When I returned home I sold off the stock and set the farm. My mother was now living with my only sibling Patsy, her husband James Kearns and their two daughters in Shillelagh, Co. Wicklow. On returning to America the following year we got married on 24th April 1976. I always tell people that I went out for St. Patrick’s Day and never came back! We regularly visit Ireland but this last trip was a sad home-coming as Patsy my only sibling passed away in early June 2015, God rest her soul.   It evoked many memories of our childhood in Tiernaur and especially my roots in Knockbreaga.

My grand-father John Lavelle, came from Cuilmore on the Newport, Castlebar Rd. and married Mary Marley. They lived on the land of Richard O’Brien that they rented from Victor Kennedy abt. 1874. They had two daughters- Ellen, and Bridget who married John Fergus of Ardagh, Newport; three sons John, and James who died young and my father Patrick. My father was also related to a Lavelle family in Shanvallyhue, Newport. Cuilmore being a very republican area, it was easy to see why my father Patrick (Sonny) became one of the leaders of the Tiernaur Coy at one time.

On the other hand, my mother May Molloy, was a blow-in to the village of Knockbreaga. Her parents, Peter Molloy and Annie Lynch were natives of Clifden, Co. Galway. After my mother and brother Tommie were born in Galway, her father Peter, a railway worker, was transferred to Killmessan, Co. Meath as signal-man. The rest of the family, Patrick, Peter, Bridget and Annie were born in Killmessan. After Annie was born, my grand-father died suddenly from pneumonia coming up to Christmas 1907. The Railway Company being good to my Grandmother, transferred the family to a Railway Cottage in Knockbreaga to open the gates at the level crossing in Carheenbrack on Westport-Achill Railway line. A Duff family had recently vacated the cottage. The Molloy family attended Knockloughra National School.

My uncle Paddy was famous for the role he played in the War of Independence being a member of the Flying Column under the steward-ship of Gen. Michael Kilroy. He fought in the Battle of Kilmeena on 19th May 1921 where he was shot in the hip and maimed so badly that arthritis set in and it curtailed his mobility for life. Unable to escape, he was captured and sent to Frongoch Prison in Wales and released coming up to Christmas that year. Having only prison clothes and little money, a Catholic Priest gave him his own long black coat and money for his passage home.   When coming up the road, my mother or my aunt Annie (who later married Laurence McGovern-a comrade of his) did not recognise him he had failed so much. Barely able to walk he stayed at home with his mother until the Railway Line closed in the 1930s. By now his brothers Tommy and P.J. were in the U.S. and two of his sisters May and Annie were married locally.  His third sister Bridie had died young and is buried in Killeen Cemetery, Newport.

The Molloys failed to buy the Railway Cottage for Paddy and he and his girl-friend, Catherine Mulloy of Newfield went to London and got married there.  Catherine was not related to Patrick. The newly-wed couple set up home in Harrow, Middlesex and Paddy got a light job. They had one daughter Ann-who in turn had three daughters of her own. Meanwhile Patrick’s mother moved to Knockmanus to live with her daughter Annie and husband Laurence McGovern.

Catherine’s grand-father worked as a gardener for James Hunter and when the Stoney Family took over his farm from Rev. Gibbings, they renovated the apple-shed beside his residence, as a dwelling house for Mulloy family.

I have nostalgic memories of my sister and I visiting the Mulloy homestead in Newfield where Bridgie and Sonny, siblings of Catherine lived, when my relatives Paddy, Catherine and Ann came on holidays every August. We sampled the different varieties of apples and pears and other exotic fruit, while exploring the ruins of James Hunter’s residence. That garden had been in the possession of another famous family John McLoughlin Esq. who had been sold out in the Encumbered Estates Court to Henry Smyth Jr., before the Hunter Family from Scotland rented it out.

Patrick died when he was abt. 65 years and is buried in a family plot in London with his wife Catherine. God rest them both.