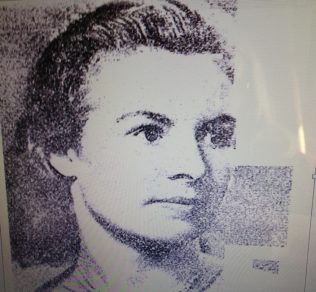 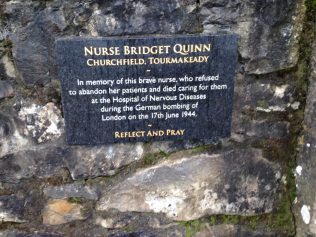 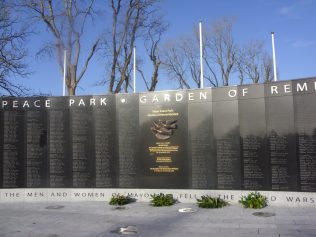 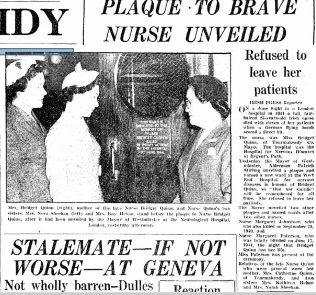 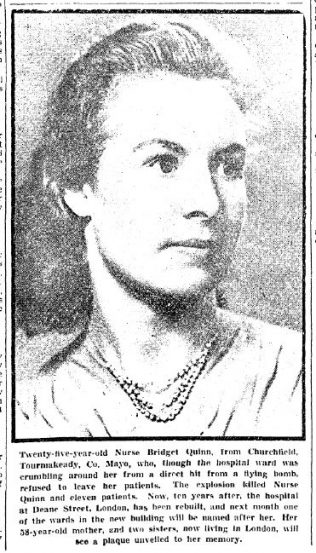 Refused to leave her patients

In 1944 a Mayo born Nurse remained and lost her life with her patients when the Germans dropped bombs over the West End in London, one of its targets being the hospital where she worked.

Bridget Quinn was born in Churchfield, Tourmakeady, Co Mayo, in 1919.

Bridget worked in the Hospital for Nervous Diseases in Regent’s Park. The Hospital was established in 1878 in Welbeck Street, moving later to St. Katherine’s Lodge, Regents Park, until the bombing. The name of the Hospital until 1915 was “The West End Hospital for Diseases of the Nervous System,  Paralysis and Epilepsy”.  Following the bombing this Hospital moved to Deane Street.

German Bombers were flying over London at the same time that Bridget was looking after her patients. A flying bomb hit the hospital directly and Bridget refused to leave her care. A subsequent explosion killed Bridget and eleven of her patients.

Tribute to Bridget in London

In 1955 the Mayor of Westminister, Patrick Stirling, unveiled a plaque in Bridget’s honour.  A new Ward was also named in the new hospital after her.    Another nurse Margaret Patterson who survived the bombing but lost her sight on the night, attended the event.

Bridget’s mother and her two sisters were also present at the unveiling, they were living in London at this time.

Tribute to Bridget in Castlebar

Thanks to Michael Feeney and his committee at the Mayo Memorial Park, there is a plaque there to acknowledge the bravery of Bridget, the plaque reads  “In Memory of this brave nurse who refused to abandon her patients and died caring for them, at the Hospital for Nervous Diseases during the German bombing of London on 17th June 1944. Reflect and Pray”.