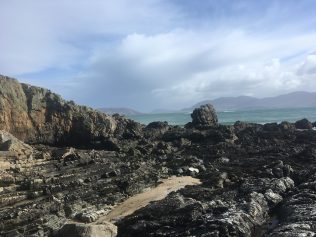 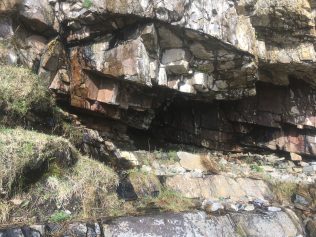 Below my childhood home in Doaghbeg is the shore, and along the shore under a spot called Ard Dubh (Duach) and underneath there and isolated from the surrounding area is our Mass Rock.

The altar itself and the cave below would’ve been well screened from those red coat priest hunters of the penal times. Ard Dubh provides the perfect lookout point and Port na Luing alongside it, a great mooring for a boat close inshore. A visit to our mass rock invokes the ancestral voices and history of our penal times. This mass rock, like all mass rocks are a link to our past, reflecting a heritage with the beliefs and culture of our forebears.

The shallow cave at our mass rock is known as Uaimh na gCunntas. The smugglers like our priests and catholic ancestors took advantage of the secrecy of this part of the shore. Strong drink has a special place in Irish culture, sure didn’t St.Patrick himself bring his own personal brewer, Mescon, with him when he returned to Ireland to preach Christianity; and didn’t the medieval monks enjoy an allowance of a gallon of beer a day, sure we only think we have a drink culture nowadays.

Legend would have us believe that the Irish have been making poitín since the potato first came to Ireland in 1589. Nearly a hundred years later the English had to introduce a tax on distilled spirits to replenish their coffers after Cromwell’s escapades and sure what could our great distillers do only ignore the levy and continue their distilling. When England passed a law forbidding private, unlicensed production of distilled alcohol and began to enforce the tax on poitín, sure the people of that era became a nation of criminal distillers and smugglers; and our Doaghbeg ancestors were experts in both trades.

Uaimh na gCunntas was the hub where Doaghbeg farmers traded their poitín to supplement their meagre incomes. They were so good at it that eventually a barracks was established in the townland to try and keep the illegal trade under control.

The site of our cillíní

This site of our mass rock and Uaimh na gCunntas is also home to another part of Doaghbeg history. This is also the site of our cilliní (children’s burial ground) and is known as Ard ‘A Leanaibh, and a stark reminder of our dark history, when babies who were stillborn or died before baptism were deemed by our church to be unworthy of a burial in consecrated ground. Also buried here are probably babies born outside of wedlock, the mentally ill, people who took their own lives, murderers, and those who would’ve been washed up ashore from shipwrecks and whose religion was unknown.

Thankfully local man Dr. Frank McAteer had a plaque made and erected at Ard ‘A Leanaibh, above our mass rock, in the early 1950s, commemorating this site. The inscription on the plaque is long since faded, but one of our older generation remembers that the first line read: Guidh ar Leanaibh and also referred to An Altóir. Also passed on to us was that the women of Doaghbeg were strong characters. If they weren’t well enough to baptise their own child, then a neighbour woman would perform the baptism.