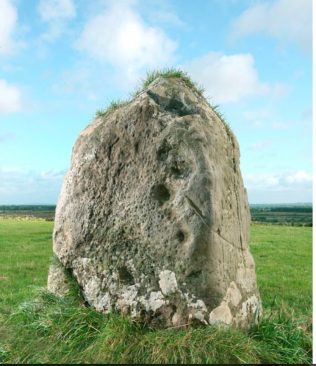 zoom
Close up of Cloonkeen standing stone taken from the South. This photograph is an enlarged version of the one taken by archaeologist Michael Moore for The National Monuments database. Date: August 2010. The stone appears to be parallel with the road but is angled to align with sunset on summer solstice on its North Western side.
Michael Moore, National Sites & Monuments database
Cloonkeen, Castlerea, County Roscommon

People have lived and worshipped in the townland of Cloonkeen for hundreds and thousands of years. We know this because of the concrete evidence they left behind. This evidence includes a solitary standing stone, numerous ring forts and the ruins of a fifth century church.

Standing stones are difficult to date and may have their origins in the Neolithic, Bronze or Iron Ages.  Their function is also difficult to explain especially when found in isolation. They may have had a symbolic, religious or practical use or a combination of all of these. Some suggest that standing stones are predominantly associated with burials particularly if they are early Bronze Age in date while others argue that they were almost always aligned to the stars, the planets or the rising or setting sun and moon at particular times of the year. Others propose that as farming replaced the more nomadic life of the hunter/gatherer standing stones could have been used as solar calendars to monitor the equinoxes in order to establish times for sowing and harvesting. Such a calendar would be hugely significant to an agriculture – based society in order to follow the seasons of the year and plot the times for crop sowing or moving livestock to other pastures.

The standing stone in Cloonkeen is recorded on the National Monuments database as RO026- 012. It is located in an open, rural setting almost mid – way alongside a link road between the N60 and R361 to the west of Castlerea town, linking the Ballinlough and Trien roads.

The immediate area is archaeologically rich with a total of six ring forts either side of the link road and the remains of an ancient church, holy well and childrens’ burial ground nearby. It is situated on an elevated site 113 m above sea level with panoramic and impressive views of the surrounding countryside and overlooking a valley to the NE and another to the SW. The surrounding farmland is good and the soil is well drained. Michael Moore, archaeologist with the National Monuments Service describes it as a limestone upright with a rectangular cross section and rounded crest. It has some solution or cup marks. The dimensions are:

The Cloonkeen standing stone is known locally as The Méaróg. Legend has it that it was thrown by a giant from the hill of Brockey close to Cloonkeen at another giant standing on the hill of Fairymount, a distance of several miles. It missed its mark and lodged in the field where it is now positioned. According to this legend the track of the giant’s four fingers and thumb are still to be seen on the stone. This field is now owned by the Joyce family.

These five “cupmarks” may be man-made or due to weathering. They are confined to the right of the SW side and vary in size. The significance of the cup marks is now obscure but the size and spacing may have conveyed complex information to those who lived in the neighbourhood at the time the stone was erected. Standing stones bearing cup marks may have appeared as early as 4,000BC and continued until 2,500BC. If these cup marks are manmade this would place the Cloonkeen standing stone in Neolithic times and possibly contemporaneous with Newgrange which was completed circa 3,200 BCE or the Great Pyramid at Giza which was completed circa 2,560 BCE (before the Christian era).

It is possible, however, that the standing stone may have had links with the settlement pattern of the numerous ringforts in the area. This would place it in the late Iron Age or early Christian era.