The Belderrig¹ currach was a sturdy, twenty-three feet long, five-man currach used along the north Mayo coast. By 1927, thirteen currachs fished Belderrig Bay.² In 2002, the National Museum of Ireland chose to build a Belderrig currach to be included in its collection and eventually to be put on public display. Skilled boat-builder, Pádraig Ó Duinnín and his team from Meitheal Mara, used traditional tools and methods to construct the Belderrig currach in the grounds of the National Museum of Ireland – Country Life, Turlough Park in Castlebar. 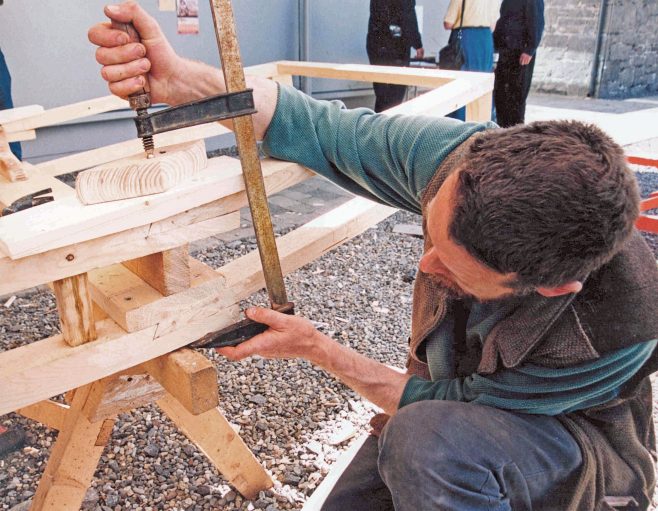 Pádraig Ó Duinnín working on the frame of the Belderrig currach, 2002. © National Museum of Ireland.

The boat-building project was also a research project and interested parties, who were familiar with the north Mayo boat, were invited to visit the Museum to discuss the construction techniques with Pádraig and his team. 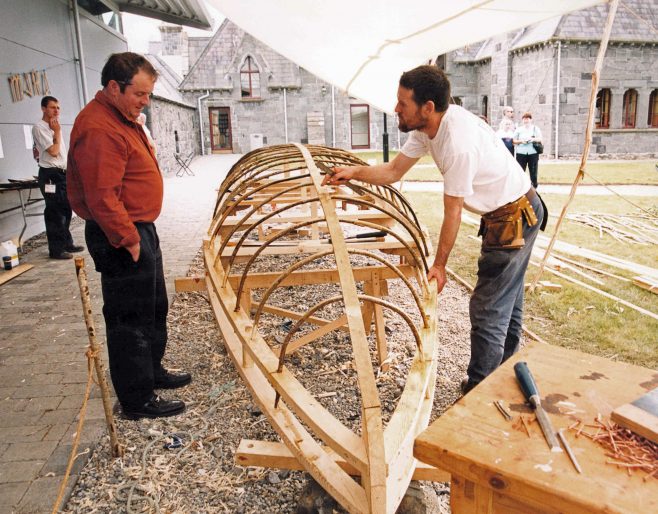 Pádraig discussing the boat build with a visitor to Turlough Park, 2002. © National Museum of Ireland.

Research into objects continues long after we acquire them and every available aspect is recorded to produce a catalogued entry in the Museum’s collections management database. This information comes initially from the person or group we acquired the object from. Additional information is collected from experts, enthusiasts, boat builders, fishing communities and other sources keen to assist the preservation of the currach. The Museum too feeds into that network of researchers and assists when we can.

In late 2019, Mayo native Tony Moran of Currachaí na Sceirí, an east coast based group of currach builders, enthusiasts and rowers, contacted the Museum requesting information on the design of the Belderrig currach. The group was planning to build their own boat. Unfortunately, the pandemic hit soon after. Site visits to Turlough Park were postponed and staff were moved to remote working.

On our return to the site, cataloguing the Museum’s boat collection continued. When reading the Museum’s file on our own Belderrig currach I found a very informative drawing of the boat with dimensions, which was completed by my colleague Albert Siggins in 2003. 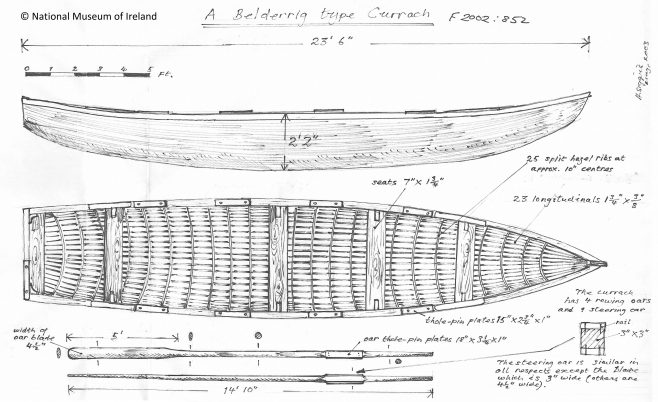 As pandemic restrictions lifted, groups also returned to their projects. I read an article ‘New Generation Keeps Mayo’s Rich Currach Tradition Alive’ in the Western People last July. In it, Currachaí na Sceirí member Shane Holland, made a plea for anyone with experience or knowledge of the craft of building traditional Mayo currachs to contact him. It was an opportunity to get back in touch with Tony and Shane’s group and share information and photos of our own Belderrig. 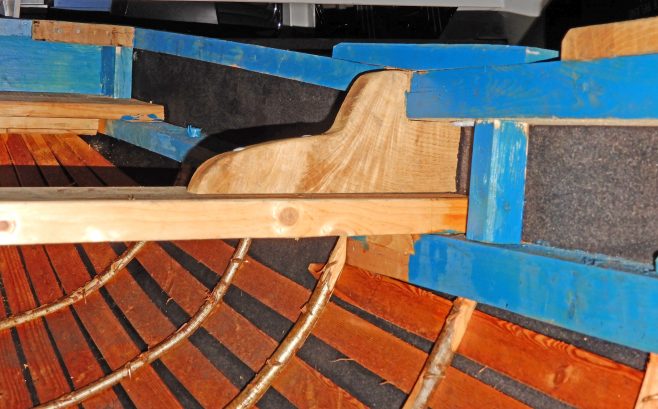 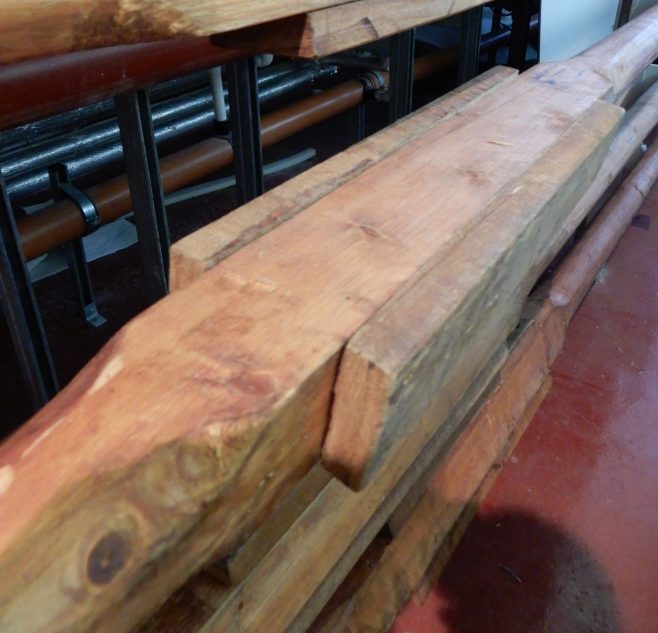 Currachaí na Sceirí had teamed up with craftsman and boat builder Dave Nolan based in West Cork who agreed to carry out repairs to the hazel ribs of their Belderrig and to reskin it before the boat was transported up to Skerries, Co. Dublin. Dave’s boat was retired from film duties on the set of Game of Thrones and refitted for new life with Currachaí na Sceirí. The group now plans to make new oars based on the original specifications and information supplied by the Museum. 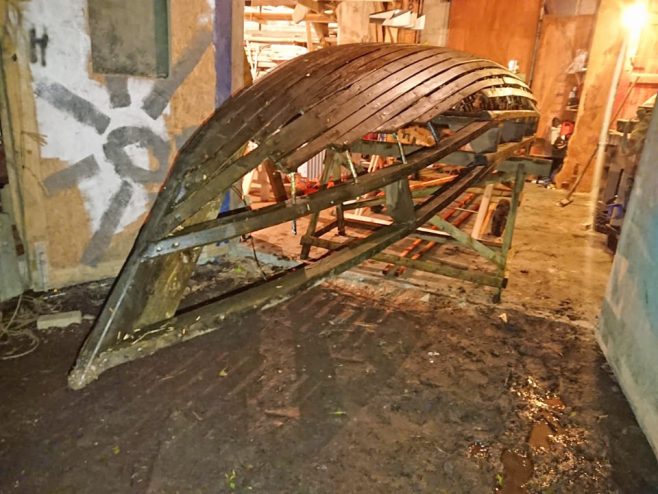 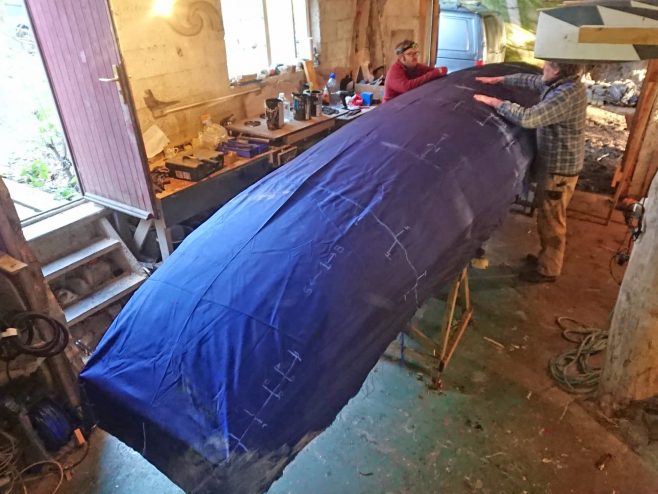 Recording the National Museum of Ireland’s traditional Irish boat collection requires ongoing research, outreach and collaboration. Fortunately, there is a wide network of experience and expertise within Ireland.