You are here: HomenextExplore our archivenextTopicsnextTraditional Boats of Ireland’s Wild Atlantic WaynextModel boats of the Irish Folklife collection

The National Museum of Ireland’s Folklife collection contains about 35 model boats of varying size and quality. While attention to detail and scale are not always guaranteed, those that are of a good quality can tell us much about their full-size versions. Models can be a useful reference when one cannot access the ‘real deal’. In this post I will take a look at some of our models of boats that were and are still being used along Ireland’s west coast. 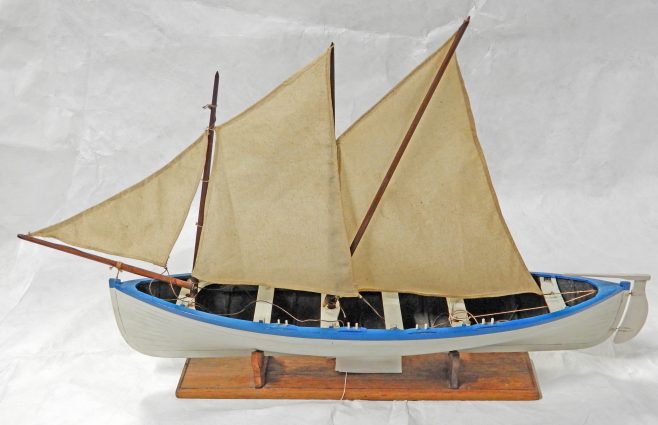 Model of a drontheim yawl. © National Museum of Ireland.

The clinker-built drontheim yawl is a boat identified with the north western counties of the Wild Atlantic Way. In the Folklife stores in Turlough Park is a beautiful model of a drontheim that measures 70cm long by 40cm high. According to boat historian Dónal Mac Polin, the drontheim was so called as it originated in the Trondheim area of Norway.¹ Also from the north west, we have a model of a Sheephaven currach from Co. Donegal which was made in the 1890s. The framework of the 60cm long model is willow, with one or two layers of tarred calico for the skin.

Making a model boat requires a skill and knowledge possessed by boat builders and for that reason it is quite often boat builders who make them. I visited 87 year old currach builder Pakie O’Toole on Inishturk in 2020. I was talking to Pakie over a full-size currach he was working on in his workshop when I noticed model currachs at different stages of completion on his shelves. Pakie makes his models with the same material used in his full-size boats. Thankfully, he was open to selling one of his c.60cm long models and I was fortunate to take one back with me on the ferry.

Pakie O’Toole, Inishturk, showing one of his model currachs in front of a working currach. September 2020. © National Museum of Ireland.

In a previous post I shared a picture showing the detail of a model currach made by Michael Gallagher of Clare Island who I interviewed. Michael is a fisherman who builds currachs and makes his models as a pastime.

A boat builder from the Dingle area was commissioned by the Royal Dublin Society before 1880 to make this model of a Kerry naomhóg. The model has a wooden construction with a textile and tar or pitch cover, complete with mast, sail and full set of eight oars. Attention to detail is apparent with the proportions matching those of a full-scale boat. The model is now in the Irish Folklife collection. Representing further along the south west coast, we hold a 78cm long model of a Cork yawl. Our records state these crafts were used by fishermen in Cork in the 19th century. 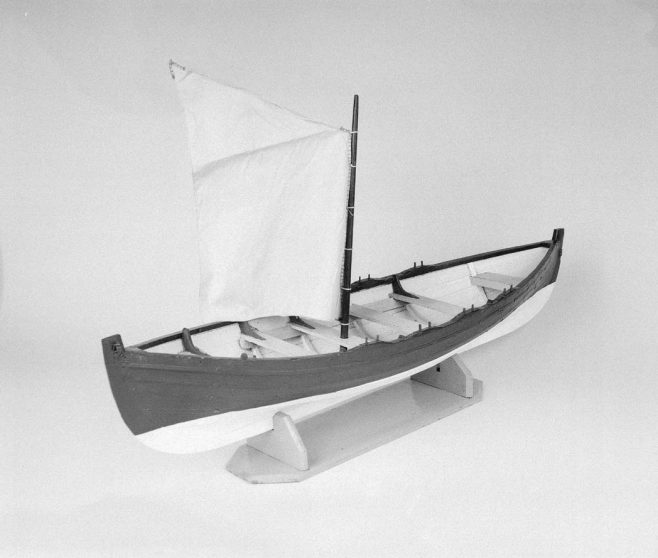 Model of a Cork yawl. © National Museum of Ireland. 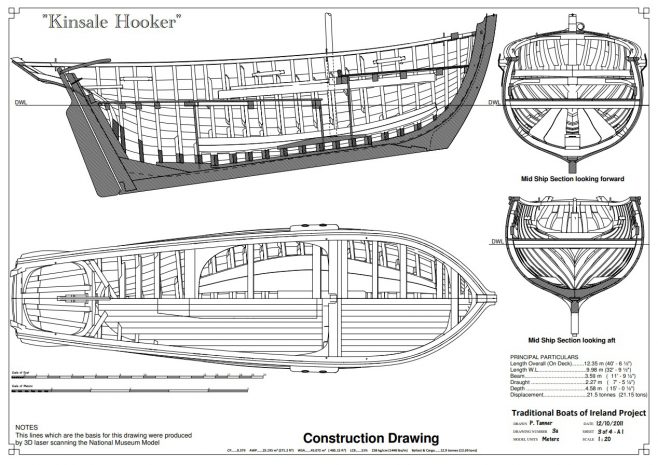 Construction drawing of a National Museum of Ireland Kinsale hooker model. Image courtesy of the Traditional Boats of Ireland Project.

² Hal Sisk, ‘The Strange Origins of the Irish Hooker’, in Traditional boats of Ireland : history, folklore and construction, p.363.

My thanks to the Traditional Boats of Ireland Project.