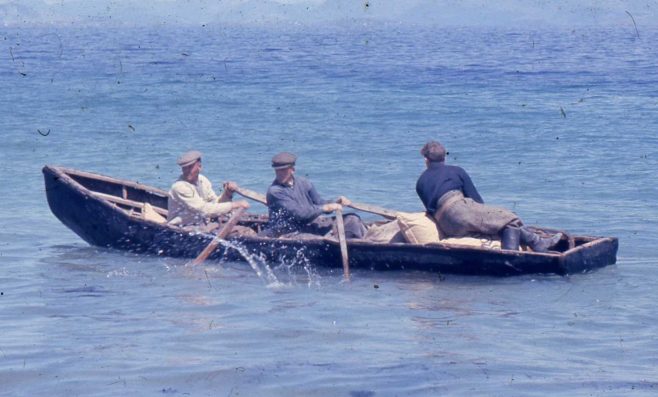 Over the centuries, the physical form of traditional Irish maritime vessels were shaped by local necessity and foreign influences. The waters off Ireland’s Atlantic coast were utilised for fishing and to transport people and cargo such as turf and seaweed in a time when coastal areas were not easily accessed by land. Working boats evolved to suit their purpose and in doing so, they reflected the story of the lives of the populations they served.

The role and importance of the Atlantic ocean in the lives of those living by its waters were recorded in a strong oral tradition that was later collected in the printed works of Irish language speakers such as Tomás Ó Criomhthain, Peig Sayers, Séamus Mac an Iomaire and Muiris Ó Súilleabháin.

The National Museum of Ireland too sought to record this fading way of life. The tangible remnants of the relationship between island and coastal communities and the sea are safeguarded and displayed at the National Museum of Ireland – Country Life in Turlough Park, Castlebar, Co. Mayo. It is on our inhabited islands and among those coastal communities today that those remnants still exist as a living way of life – as a living link to our past.