You are here: HomenextExplore our archivenextTopicsnextTraditional Boats of Ireland’s Wild Atlantic WaynextLobster fishing season is no pot luck

This time of year is lobster season for many fishermen. Along the Irish coast, boats will make perhaps several journeys weekly out to the rocky inshore waters to check the catch in pre-set lobster pots. 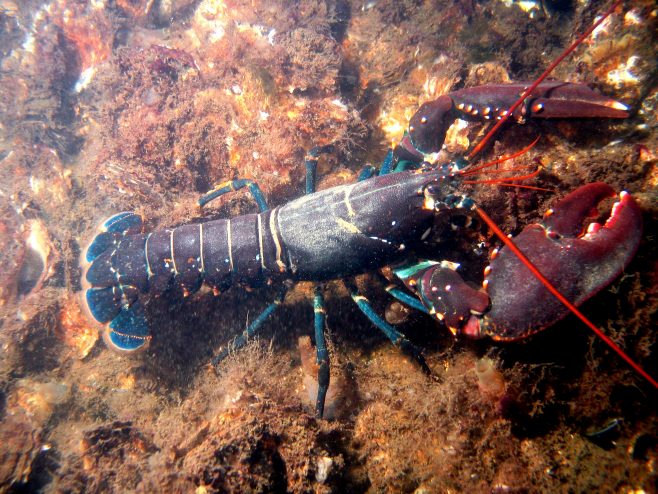 The money brought to the fisherman’s household from the sale of his lobster catch was always welcomed. Lobster fishing was relatively straightforward for anyone who had access to a boat. A currach was a sufficiently sized boat in which to carry pots. A currach’s light, keel-less frame was ideal for getting close to the rocky shallows where the lobster could be found. The type of fishing being practiced could determine the design of a currach and heavier currachs were sometimes used. Achill currachs came to be built with a stronger double-gunwale and continuous inner planking. Probably influenced by the lobster-fishing currachs of Connemara, this made the Achill currach a heavier craft appropriate for gathering shellfish including lobster.¹ 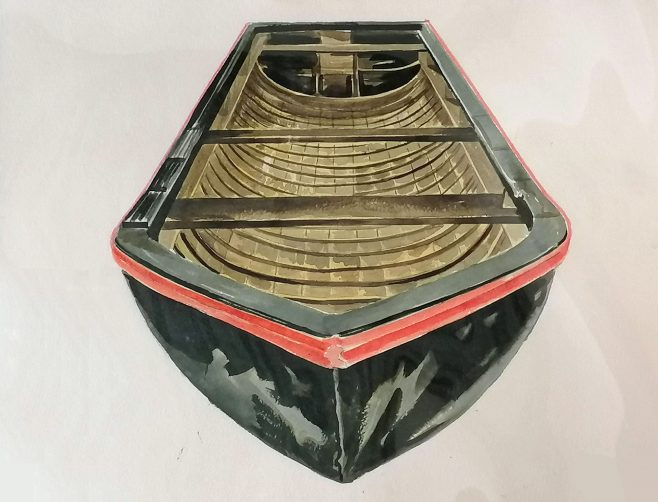 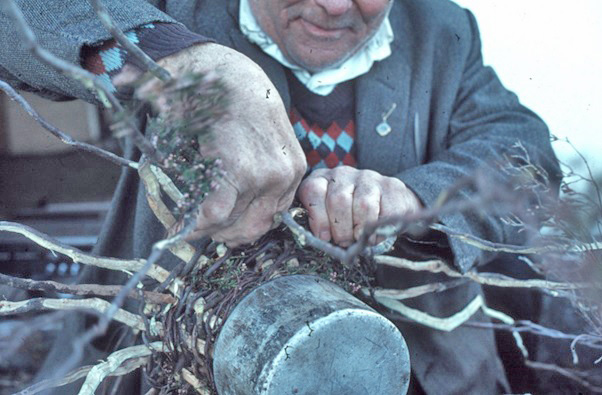 A lobster pot could be made from anything you had at your disposal and their design was simple. The above image shows Michael O’Malley preparing and inserting ribs in a scraw or sod contained in a saucepan. The opening created by the saucepan formed the bearach or mouth of the finished lobster pot. Michael O’Malley’s lobster pot is on public display at the National Museum of Ireland – Country Life. 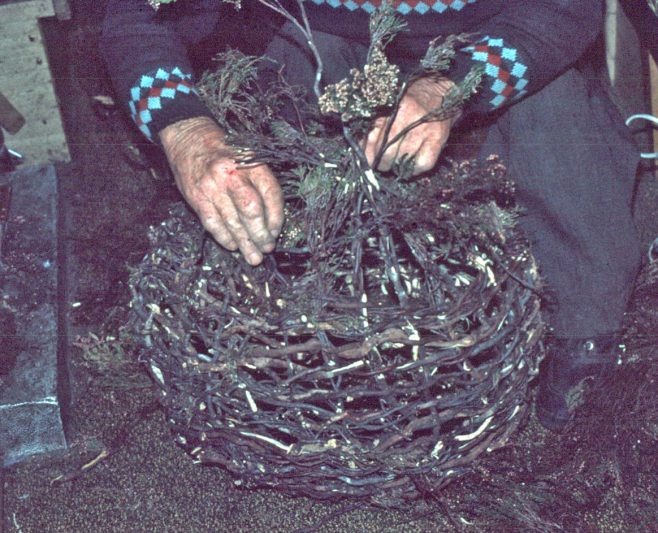 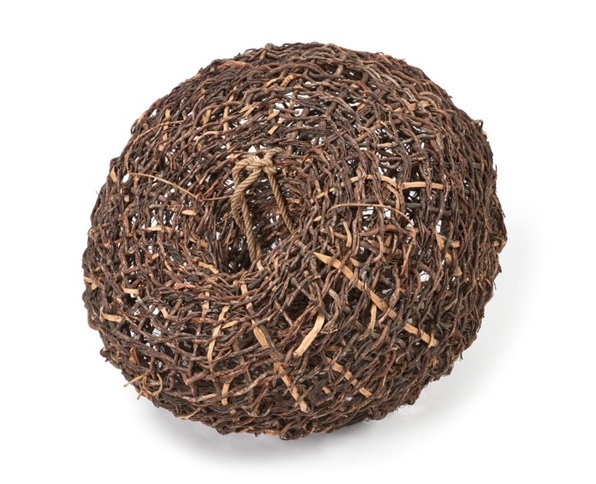 Archaeologist Emyr Estyn Evans described the old-style pots or creels as being circular, with a flat weighted bottom, sometimes hinged. The principle rods were of hazel or even whin, the woven sides of sally, laurel or heather stems.²

Hazel and sally were cut in winter to make lobster pots for the fishing season. When dried, the Sea Rod (An tSlat Mhara) becomes hard and sinewy and in that state it was often used as mesh in lobster pots.³ 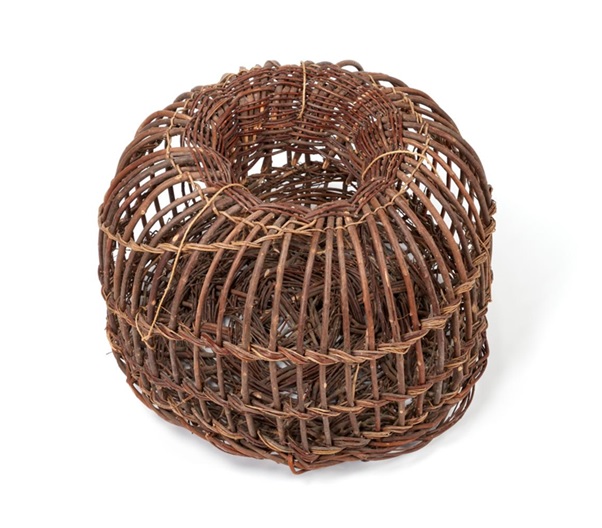 This pictured Cork pot from the Irish Folklife collection is hemispherical in shape and made of a close series of fifty vertical wicker rods bent over at the top to form the funnel. On the top of the pot and around the funnel is a weft of small twigs. There is no weft on the sides but a spiral coil of twigs rises from the base and makes four complete turns around the pot. The weft of the base is coarse and consists of bundles of small twigs woven between the warp in a roughly circular fashion. 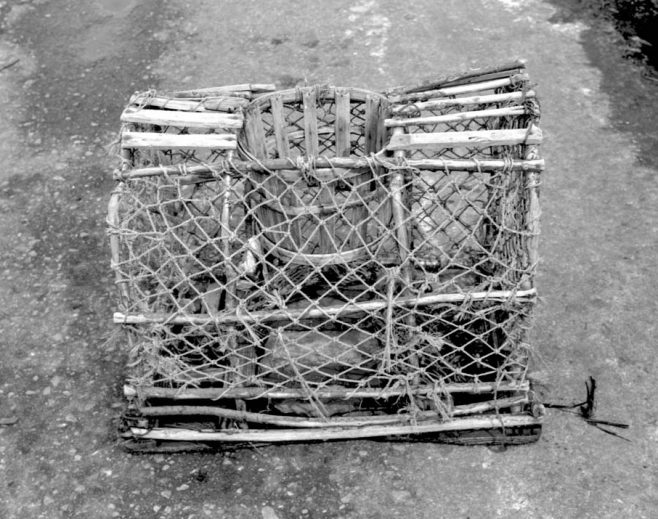 A lobster pot needed to be weighed down with stone to keep it on the seabed or between rocks and seaweed where the lobster were found. Practically any type of fish was used as bait and placed inside the pot to entice the lobster down the funnel and into the pot from where it could not exit. 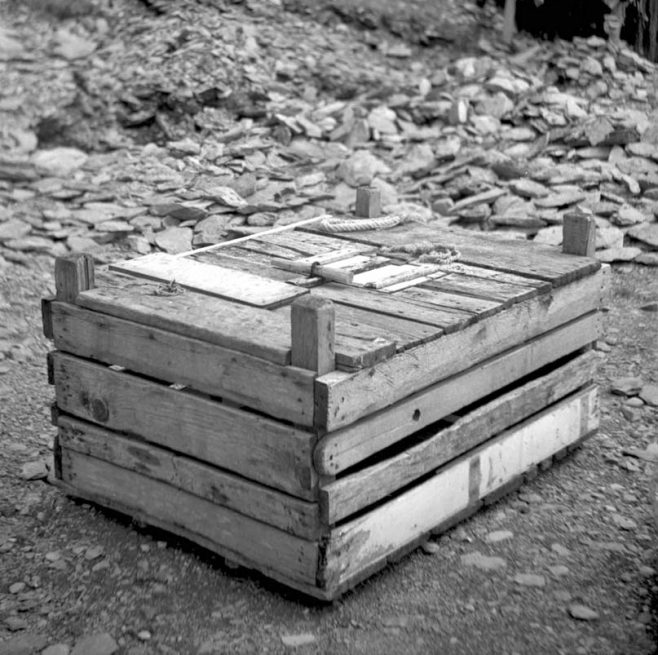 Lobsters were transferred from the pots to larger storage tanks that were submerged in the seawater to keep the catch alive while a sale and transportation were organised. In the mid-twentieth century, fishermen from Portdoon on Inishturk rowed their currachs twenty-five kilometres to Corraun, Achill to sell their lobsters.

Fishermen now use more durable, modern materials to make their lobster pots. The fisherman’s job is also made easier by the use of a mechanical pot hauler which draws up the rope attached to the pot. The majority of the Irish lobster catch is exported to European markets mainly through France.⁴ In 2020, 700 tonnes of lobster, with a value of €13 million, were exported from Ireland.⁵ 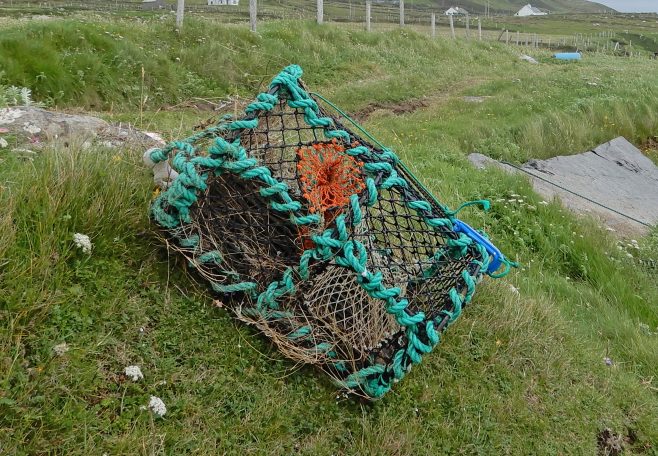 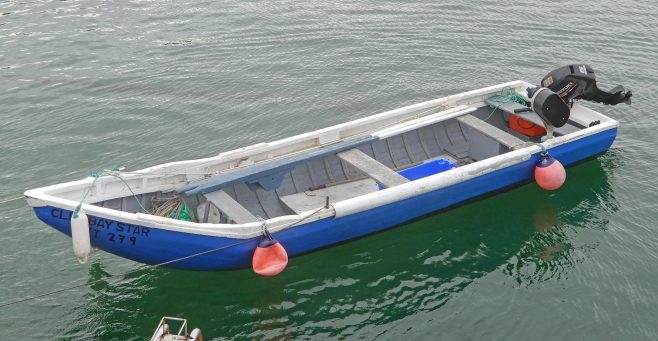 Currach with a pot hauler fixed to the portside gunwale. A gaff for pulling in the pot rope can be seen in the boat, 2020. © National Museum of Ireland.