You are here: HomenextExplore our archivenextTopicsnextTraditional Boats of Ireland’s Wild Atlantic WaynextTim Severin's The Brendan Voyage

While cataloguing the Irish Folklife currach collection, I am always conscious that the boats I am working on are as far from their natural environment as they could possibly be. While most of them once worked the inshore fishing spots of the Irish west coast and rested out in the open when not in use, they are now safely stored indoors in environmentally controlled conditions that will ensure their preservation. As a result of their being stored indoors, both prior to and after the National Museum of Ireland acquired them, the skins of some of our boats have dried out and become hard and inflexible. Except for those who have taken to the water in a currach over a lengthy period, it is difficult to appreciate how their simple design and natural materials will perform when faced with the harsh truths of the sea and the elements. Part of my work on our planned boat gallery at the National Museum of Ireland – Country Life is to talk to fishermen who worked, and still work, with currachs to understand the boat’s capabilities. Unfortunately, pandemic restrictions have prevented me from carrying out fieldwork and interviews but there are sources that provide first-hand accounts of experiencing travel by currach. Tim Severin’s book The Brendan Voyage is one of those sources. 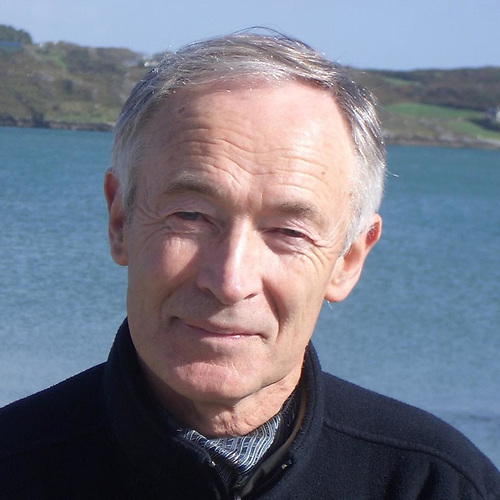 Tim Severin was an explorer, author and historian who sadly passed away last month at the age of 80. Throughout 1976-1977, Severin led a small group of fellow explorers as they sailed the journey from Ireland west across the Atlantic Ocean to the Promised Land believed to have been completed by Saint Brendan in the sixth century. Saint Brendan had made the journey in a large currach made of a wooden frame and covered with tanned oxhides. Severin’s aim was to see whether Saint Brendan’s journey had been possible and to do that the group’s vessel would have to be as close a replica of the saint’s boat as possible which also meant using materials and building methods from that time. 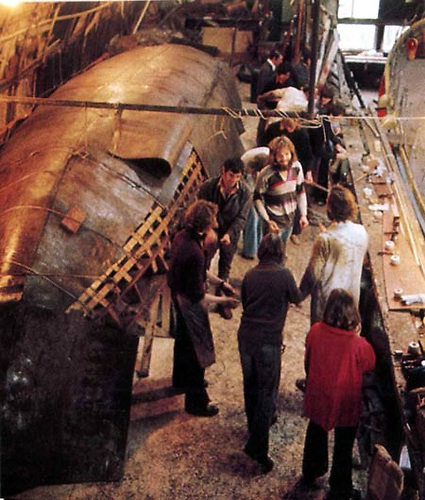 The Brendan currach under construction in Crosshaven Boatyard showing its primitive wooden skeleton and hide skin. Photograph by Ian Yeomans.

The finished 36 foot boat, named Brendan, had a double gunwale of oak. Leather thongs were used to lash the ash frame together and the outside of the hull was then covered with 49 quarter of an inch thick oxhides that were stitched together and finished with a wool grease coating. Brendan’s two masts and oars were also made from ash and flax made suitable sails and ropes. 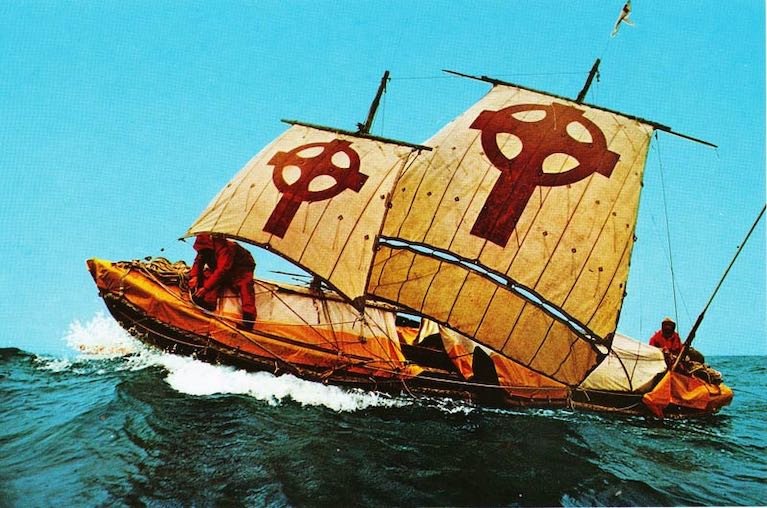 The impressive construction of the boat was informed by thorough research, but how would she handle on the open waters of the rough Atlantic? Here, The Brendan Voyage gives us many practical and poetic descriptions of Brendan’s capabilities. Severin describes how Brendan’s light frame meant the boat could mould to the many waves that pounded its shell. The flexibility offered by the leather skin developed in Severin ‘a sense of being part of the sea’s motion’. He believed the leather survived so well in part due to the cold waters of the Atlantic.

When Brendan was holed by drifting ice in the dangerous stretch between Greenland and Newfoundland, crew member George Molony had the unpleasant job of hanging over the gunwale in water temperatures as low as zero degrees centigrade in order to patch and stitch the hull while the boat kept sailing. Up to that point, ice had been glancing rather harmlessly off the curved hull of the currach.

The combination of Brendan’s medieval design and natural materials made it an extremely durable boat. Even during sea trials in advance of launching from Ireland, deliberate attempts to capsize Brendan were extraordinarily difficult. The currach could also be fast, when conditions were right. Brendan’s best 24-hour distance was an impressive 115 miles. Brendan reached her destination in June 1977. The large currach’s epic journey had proven that, in Tim Severin’s own words, ‘she was a true ocean-going vessel, and there was no longer any practical objection to the idea that Irish monks might have sailed their leather boats to North America before the Norsemen, and long before Columbus.’

My thanks to Afloat.ie for assistance in sourcing images.