During a recent listing of our fishing related objects from Co. Cork, I came across a beautifully made, and well preserved, lobster pot from Hare Island. Hare Island (also known as Heir Island, Inishodriscol and Inis Uí Drisceoil) is an inhabited island located just north of the larger Sherkin Island in Roaringwater Bay, Co. Cork. 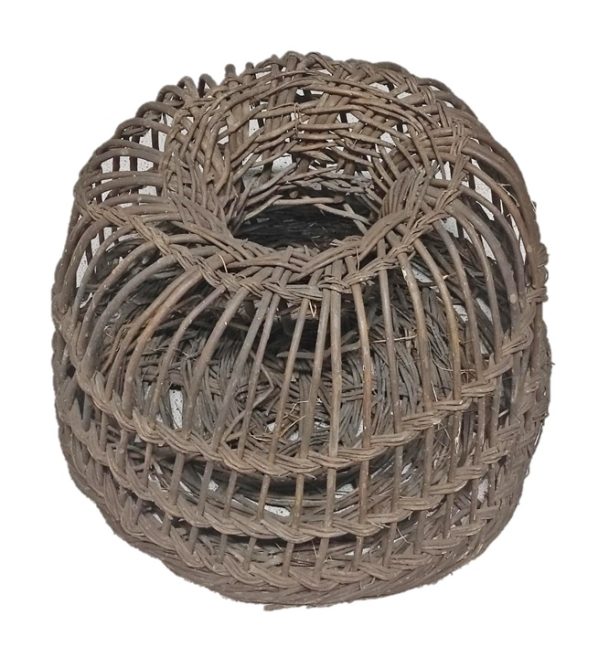 The National Museum acquired the wicker pot almost one hundred years ago. Our file tells us very little about the pot’s provenance other than it was presented, with a second pot, to the Museum by the Department of Lands and Fisheries through Mr. C. Green, secretary, in July 1931. 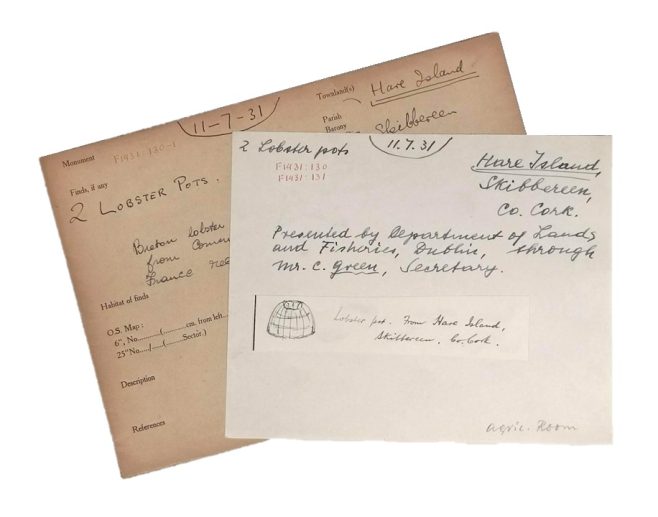 A detailed description of the technique adopted in making a Hare Island lobster pot can be found in Cormac Levis’ Towelsail Yawls. The Lobsterboats of Heir Island and Roaringwater Bay.¹ The description is enhanced by Russell Barnett’s illustrations. According to Levis, the making of lobster pots was a winter activity. Wild willow was cut on the mainland around Ballydehob in November and December when the sap level was low. It was better to use the willow soon after cutting as it could become brittle. However, willow could be steeped in a stream or other water source until needed.

The pots were made with the help of a simple wooden mould which had several holes into which the willow was pushed and then bent outward to create the ‘chimney’. The cylinder from the mouth into the pot was known as the ‘chimney’. Once the willow was bent outward to the floor, the pot took on the distinctive shape that can be seen in the Museum’s example. Bait was tied around the chimney and two stones were tied inside the pot to weight it down when in the water. 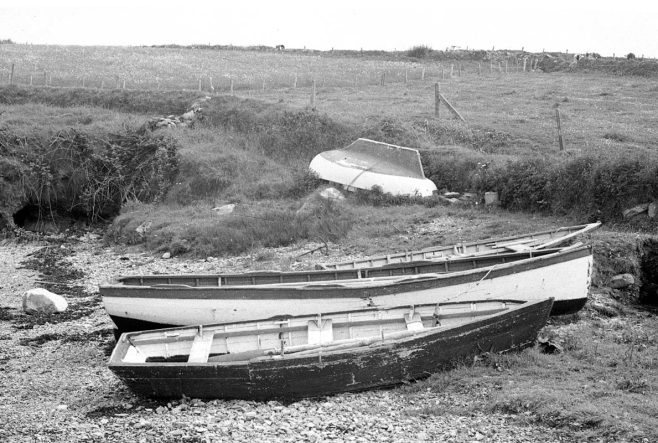 Lobster fishing was widely practiced across Roaringwater Bay. A lobster fishing enterprise which began in the 1850s around Baltimore, Co. Cork, soon went from operating ten boats to 42 boats which were all owned by the people of Cape Clear Island in Roaringwater Bay. The 42 boats working five nights could expect to take in close to 10,000 lobsters.² Fishermen could sell their catch to local businesses such as William Kinmonth and Sons of Wood’s Street, Cork, which was also established in the 1850s.³ The South West Coast Fishing Company held an interest in lobster boats in the Skibbeereen, Baltimore and Clonakilty areas.⁴ When not fishing lobster, the Hare Island sailing lobster boats were employed in mackerel fishing and also took part in regattas.⁵

The Hare Island gliomadóir (lobster fisherman) continued to use the wicker pot design into the twentieth century. This account of the Hare Island gliomadóir’s tough and frugal working life by Pádraig Ó Midhagain was printed in the Irish Independent in 1926 – ‘Their boat – a stout, trim craft twenty-seven feet “over all”, and wide of beam… Great sailing vessels they are; fit for any weather. Each boat carries a line of a dozen or more “pots” strung together fourteen yards apart. The pot-train is “shot” during the darker hours in well-known lobster haunts. The fishers cook their food, eat, smoke, and sleep at intervals.

The pots are hauled in every two hours. Hauling a pot-train from the sea-bed is heavy work for two men, and as they are “shot” eight or ten times a day a lobster cruise is a strenuous experience. Their pots hauled – anchor is weighed and sail set for the next lobster bed, often five miles away.

Six to eight weeks away from home on the fishing season, the gliomach [lobster] fisher has his food supply on board. Beyond calling for fresh water at some familiar “sruth” [stream] amongst the cliffs or coves, he never leaves his trim little craft.’⁶ 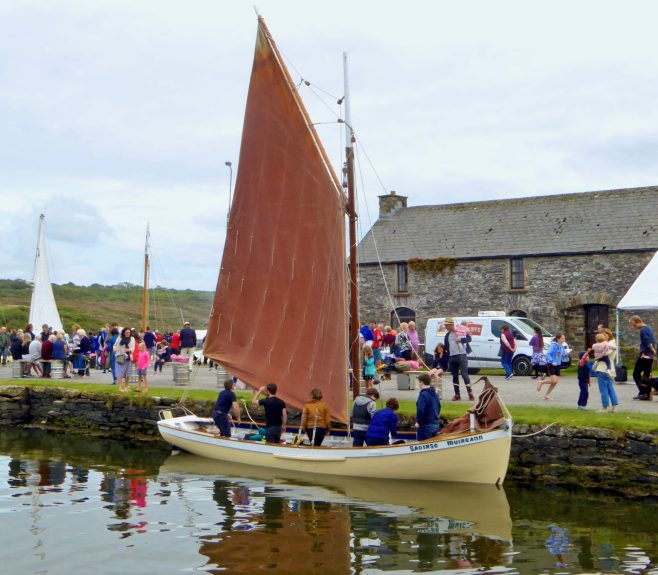 Cormac Levis gives further details of the meagre sleeping arrangements on board a Hare Island lobster boat – ‘The only shelter available to the lobstermen in their six of seven-week fishing trip was a tent of sorts, temporarily erected in the bow when the boat was at anchor. The tent was originally referred to in the local Irish dialect by the term teabhal. Over time, this word was confused with the English word ‘towel’.⁷ The towel was a sail that could be adapted to create shelter.

Lobster fishing remained an important commercial activity for the inhabitants of Hare Island well into the second half of the twentieth century. The Hare Island Development Association acknowledged in 1971 that the prosperity of the islanders depended entirely on the success of lobster fishing.⁸

My thanks to Roaringwater Journal.