You are here: HomenextExplore our archivenextTopicsnextTraditional Boats of Ireland’s Wild Atlantic WaynextEngagement with the north-west continues

Engagement with the north-west continues

October was a busy month in terms of the development of our new boat gallery. A kick-off workshop was held with Museum staff and the gallery’s design team Metaphor at which project objectives, key audiences and themes were discussed. These initial design stages encourage ideas and different approaches that promote the overall objectives of the gallery.

The coastal village of Rosses Point, Co. Sligo was the perfect setting for the 2022 Maritime Heritage Weekend which ran from 21-23 October. The Maritime Heritage Weekend brings stories of the north-west coast to life in a series of talks and lectures from sailors, explorers and historians. I was delighted to have been asked to speak about the development of the Museum’s traditional boat gallery. 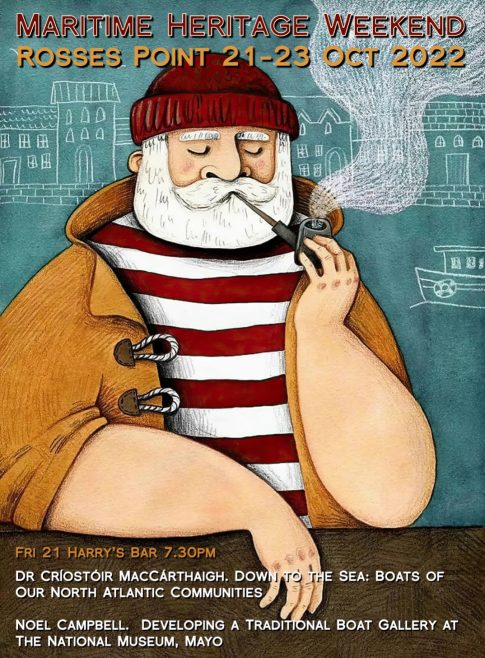 Attending the event was also a great opportunity to meet and engage with local historians and families who are steeped in the maritime heritage of north Mayo, Sligo and Donegal. A very generous audience provided several contacts and pledged to help in my research wherever they could. The three-day weekend featured keynote speaker Dr Críostóir Mac Cárthaigh of the National Folklore Collection. Críostóir is also editor of the monumental and authoritative Traditional Boats of Ireland. All proceeds from the weekend went to the Sligo Bay Lifeboat/RNLI.

Later in the month we had a visit to Turlough Park from the new Coastal Guiding group from the Achill VTOS Hub. The Coastal Guiding course is aimed at people who are passionate about their environment and exploring its coastal landscape, heritage, culture and ecology with an enthusiasm for getting outdoors and sharing this with others. 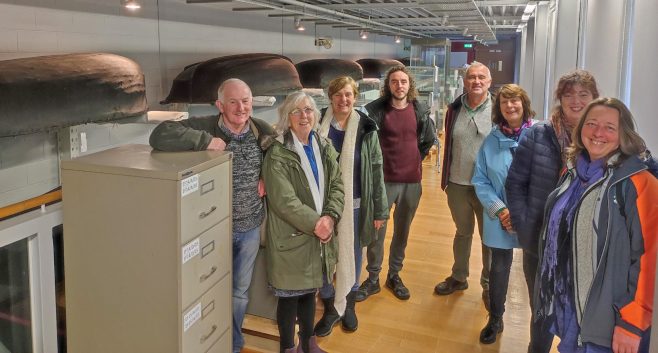 I took the opportunity to bring the group to the boat gallery to explain all that is happening with its development. The group is well informed on matters maritime with many of its members from communities and families that build and use boats. As with the Rosses Point event, many useful contacts were made and the Coastal Guiding group have kindly invited me to join them when they visit an Achill boatyard in the new year. I will certainly not miss that opportunity.

My thanks to Medbh Gillard and the organisers of the Maritime Heritage Weekend and to Thérèse Ruane, VTOS Coordinator, and the members of the Coastal Guiding group.