Like generations of his family before him, Mikey O’Toole often sits in his house in Ballyheer, Inishturk and looks down onto Portdoon Harbour and out across the south coast of the island toward Connacht’s highest peak Mweelrea and the Sheeffry Hills on the Mayo mainland. It is a magnificent view I was also fortunate to appreciate. I had travelled the hour-long ferry ride to Inishturk to talk with Mikey about local fishing traditions. The surname O’Toole has a long connection to Inishturk. Working on the first Ordnance Survey of Ireland, John O’Donovan wrote in 1838, ‘This island is said to be in the possession of the O’Tooles for an unknown number of centuries’.¹ Much of Mikey’s life has been shaped by the island. His great grandfather built the house in which he and his wife Mary Ann raised a family and still live in. Mikey followed in the footsteps of his great grandfather, grandfather and father who all fished the waters around Inishturk. 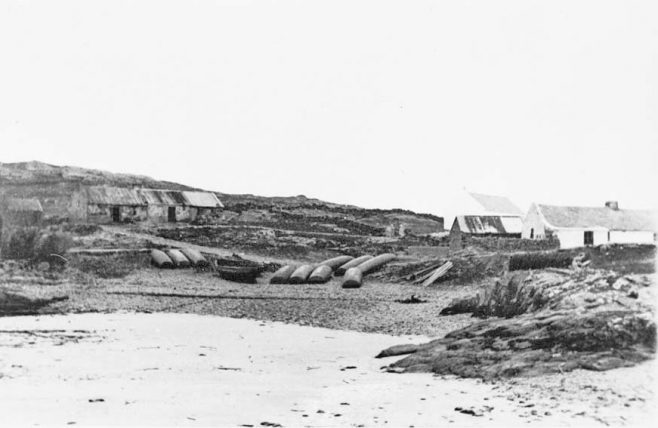 At the turn of the twentieth century, the Inishturk fleet consisted of a handful of currachs and one hooker.² It was recorded that few of the men on Inishturk were fishermen and those that were sold their catch to others.³ Mikey’s father fished for lobster and rowed his currach a distance of approximately twenty-five kilometres from Portdoon to Corraun, Achill to sell his catch. There were five currachs fishing out of Portdoon in his father’s day. Today, Mikey is the last fisherman based at the small harbour. 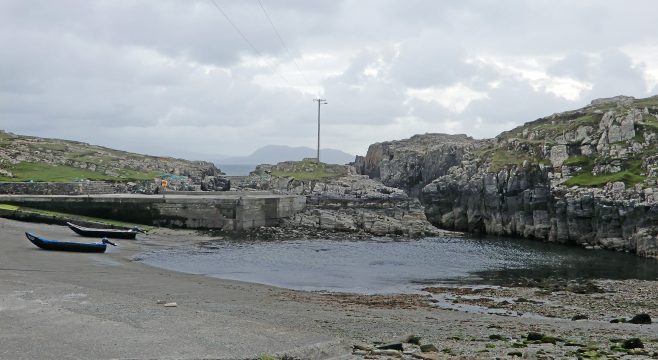 Mikey has been fishing since the 1960s and today he checks his forty lobster pots from his currach, the ‘Portdoon Princess’. She was built by John McCann of Inishbofin in 2013 and her ribs have since received repair work from Pakie O’Toole of Inishturk. 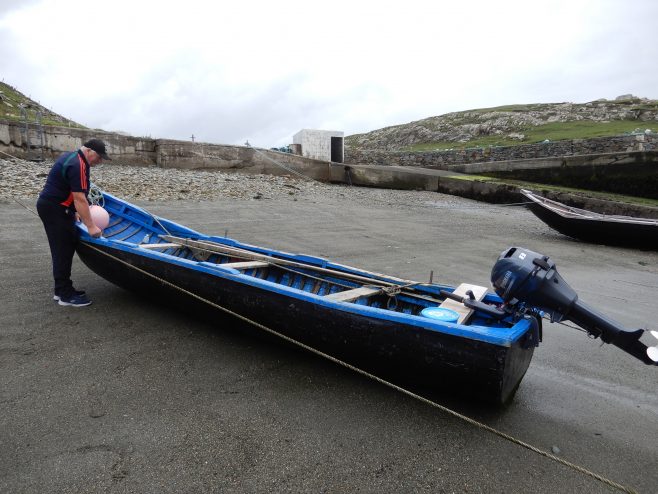 The narrowest section of the natural entrance to Portdoon Harbour is only ten to eleven feet wide, making it difficult to negotiate at times. In addition to tending to his lobster pots, Mikey catches mackerel and pollack on his hand lines and transports his sheep in his currach to Inishdalla and Caher Island, distances of 2.5km and 5km respectively.

The natural entrance to Portdoon Harbour is only ten to eleven feet wide at its narrowest. © National Museum of Ireland. 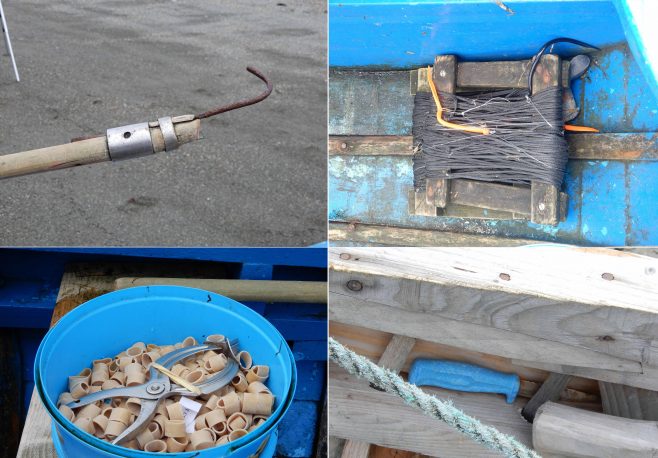 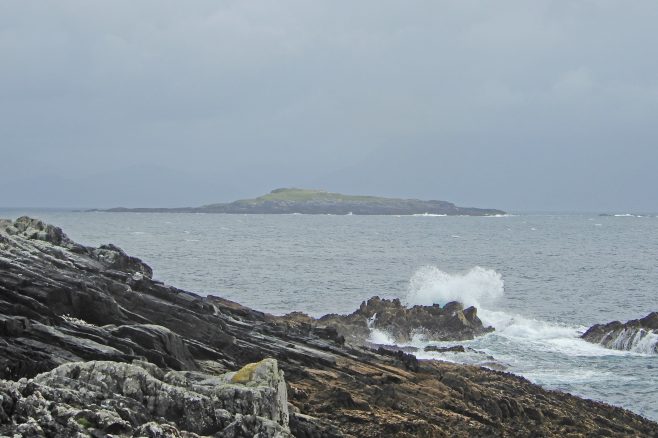 Inishdalla with grazing sheep from the rugged shore of Portdoon. © National Museum of Ireland.

Mikey introduced me to Pakie O’Toole who is a skilled currach building. Now in his late eighties, he still builds and repairs currachs in his workshop beside his house. Pakie explained to me how he builds his Inishturk currachs. He uses white deal for the seats as it is light and he uses oak for the ribs. The ribs are steamed, not boiled, to bend them into shape. It takes him about two weeks to build a currach. The fibreglass skin he uses comes in rolls and when it is fixed to the hull of the currach a black colouring is added to the hardening liquid before being applied to the fibreglass. It then hardens to waterproof the currach and gives the boat its distinctive black finish. 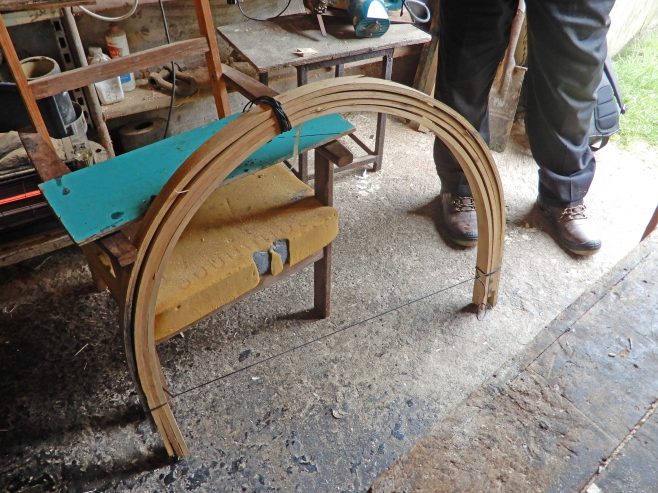 Oak ribs tied together to hold their shape. © National Museum of Ireland. 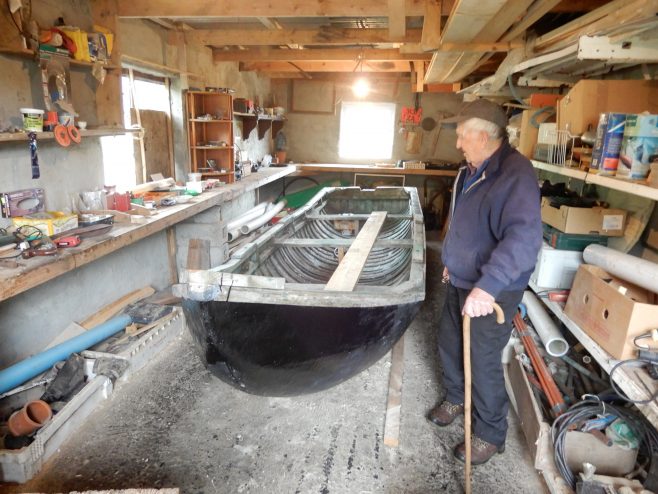 Pakie builds his currachs to the Inishturk design. It is a design that differs to the boats of nearby Clare Island in that the bow on the Inishturk currach is higher than that of the Clare Island currach. Like Mikey’s currach, Pakie builds to nineteen feet. Pakie recalls a time when there was more fishing and farming on the island. There used to be cattle on Inishturk he told me, but not anymore. Today, a scheduled ferry service, a stunning community club and pub, scenic cliff walks, beaches, sea angling and the friendliness of locals attract tourists keen to experience Inishturk. 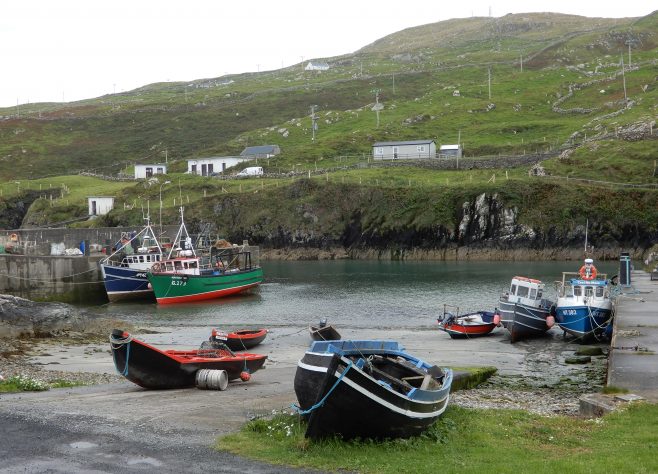 My thanks to Mikey and Mary Ann O’Toole and to Pakie O’Toole for their time and hospitality and to Mary Helena O’Toole, Community Development Coordinator, Inishturk Community Club for assistance in arranging my visit to Inishturk.