You are here: HomenextExplore our archivenextTopicsnextTraditional Boats of Ireland’s Wild Atlantic WaynextCurrach fishermen of Clare Island 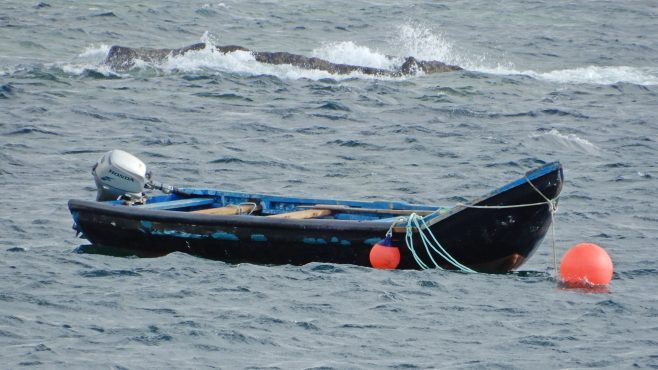 In planning this year’s fieldwork last spring, I drew up a list of locations that I was keen to visit during the summer months. Traveling during the favourable summer weather would allow for some nice photography, more flexibility with extended ferry timetables to the islands and calmer seas which would permit more activity on the water. My plans were dealt a blow with the introduction of pandemic restrictions but once travel within your own county was permitted I immediately set about organising a visit to Clare Island.

Clare Island lies 5.5 kilometres off the coast of County Mayo. It is only one hour drive from the National Museum of Ireland – Country Life at Turlough Park to the ferry departure at Roonagh Pier. Through the very helpful Clare Island Development Company I had arranged to meet current and past currach fishermen throughout my day on the island. The first islander I met was Eddie O’Malley. From his house, Eddie had noticed me photographing currachs at the quay and correctly assumed I was the man from the National Museum. I recorded fifteen currachs at the quay. Of those, four were possibly beyond use and three were racing currachs. 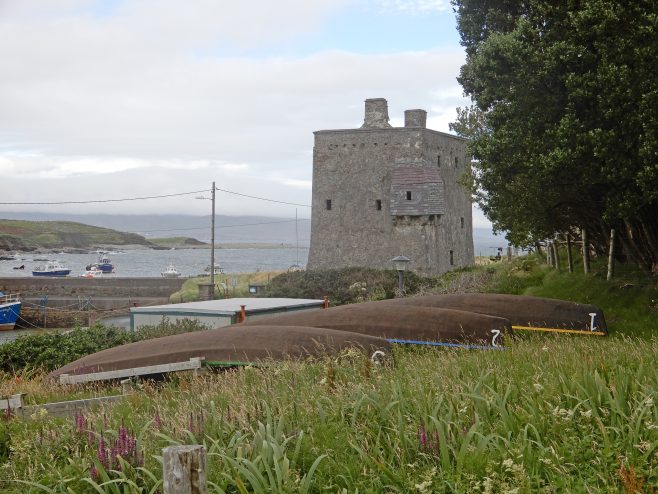 Eddie kindly drove me west along the island’s southern coast to the small pier at Port an Chuaille. A Commission of Inquiry into the State of the Irish Fisheries in 1836 recorded that Port an Chuaille and the surrounding area ‘is one general wild rock, amongst the winding channels of which a few adventurous fishermen find some shelter for small craft’. Those fishing from Port and Chuaille today are no less adventurous. Eddie’s family were fishermen and he remembers himself that back in the 1960s, 70s and 80s there would have been seven currachs, with two men in each, fishing lobster from Port an Chuaille. In between farming and other work, those fishermen would venture out on the ocean three times a day (6.30am, lunchtime and again in the evening) to check their lobster pots. With no slipway at Port an Chuaille at that time, fishermen had to row their currachs back in on the tide. 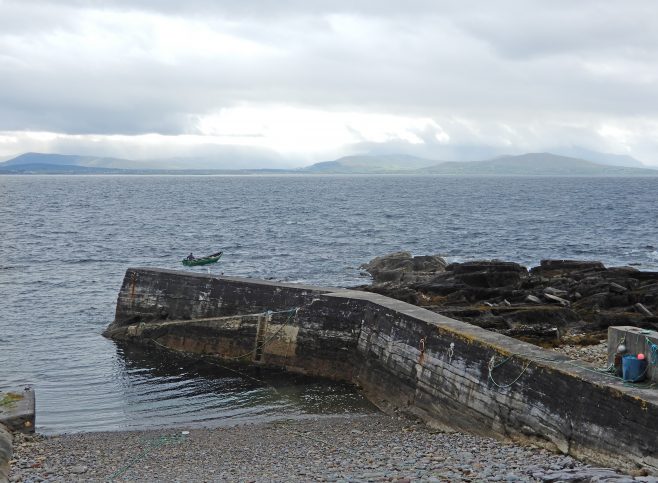 The pier at Port an Chuaille, Clare Island. Photograph by Noel Campbell. © National Museum of Ireland.

After my conversation with Eddie, I began to walk west when I received a call from Seán O’Grady and we agreed to meet back at Port an Chuaille. Seán is a part-time fisherman and, along with a friend, he built his own currach which fortunately for me was on its trailer at Port an Chuaille. 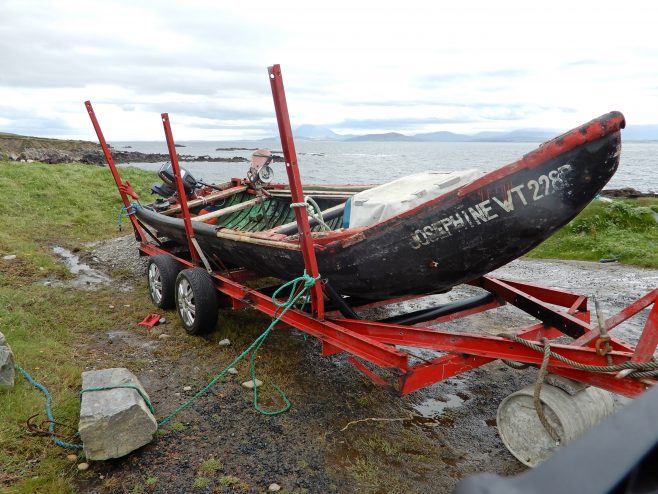 Like his father before him, Seán fishes lobster and when the weather allows he takes his currach out to check his pots for catch once a day. While Seán has the advantage of an outboard motor, his father fished in a rowing currach. He would often row the arduous journey from Clare Island to Achill Sound to sell the lobsters he had caught. Encouragingly, Seán believes there are more currachs in use now on the island than there were thirty years ago.

In my next posts on Clare Island’s currachs I will look at their past and present design and see what the National Museum’s archives can tell us about the fishing practices of this wild Atlantic island. I will also share details of my conversation with fisherman and currach builder Michael Gallagher.

My thanks to Eddie O’Malley, Seán O’Grady and Michael Gallagher for their time and to Kathy Gallagher of the Clare Island Development Company for arranging interviews.