You are here: HomenextExplore our archivenextTopicsnextTraditional Boats of Ireland’s Wild Atlantic WaynextStorm season in Sligo eighty years ago

Storm Barra has left us in no doubt that the 2021-22 storm season is upon us. Barra, the second named storm this winter, has done much damage and hampered the delivery of services across the island of Ireland. The west coast bore the brunt of Barra where footage of ferocious seas and high winds reminded me of a near tragic sailing that involved my own grandfather Garda James Campbell during the storm season of 1940-41.

At ten o’clock on the morning of 26 February of that year, three men set out in their boat from Cairns Pier, which is situated about half way between Grange and Cliffoney, Co. Sligo. Their destination was Inishmurray island. The boat was owned by Martin Brady, the postman who was travelling to the island to deliver the mail. His companions were on-duty Garda Campbell and Dan Waters who went along to give assistance on the boat. The boat itself was one with combined motor and sail. 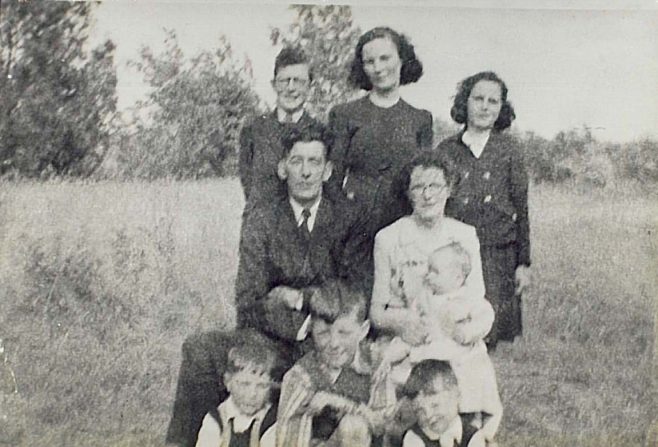 The men made the ten-mile journey to Inishmurray in an hour and a half. They spent two hours on the island going about their business. By the time they set off for the mainland at two o’clock in the afternoon, a strong southerly breeze had began to blow and churn up the sea. When they reached the halfway point of the journey, the storm became worse. They altered their course and slipped the engine on to full power in an effort to speed up their journey to safety.

The strain on the engine was too much and it broke down when the boat was only a mile from home. They decided to tack with half sail into the wind. The move was successful until a strong gust swept the mast and sail from the boat, leaving the men at the mercy of the wind and sea. Their oars would have been ineffective against the sea. 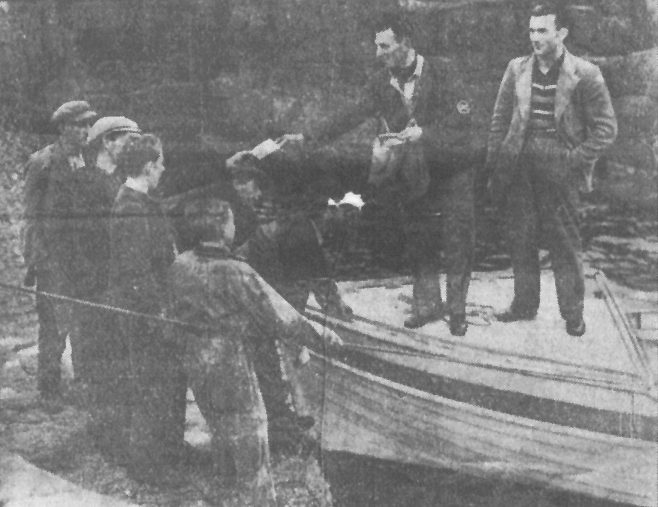 Martin Brady delivers the mail to islanders on Inishmurray, 1946. Image courtesy of the Irish Independent.

The men were now powerless as a merciless gale took them further out to sea. From shreds of the canvas sail they succeeded in rigging up an improvised sail on a length of timber found in the boat. Using the rudder, oars and manufactured sail, the crew kept the stern of the boat to the breeze and ran with the storm.

Night came in and the boat drifted for hours in the darkness. The men knew that if they kept this course they would eventually be blown ashore somewhere along the Donegal coast. At half past ten that night the boat rode in on the surface of Atlantic breakers to the foot of Slieve League. They began to climb up a 2,000 feet high steep cliff using a sheep path and as they did they could see their boat being smashed to pieces below them. They finally saw the light of a house ahead of them near Teelin in Co. Donegal. The house was owned by Manus Donnigan who looked after the men and alerted the Gardaí.

My grandfather, who was originally from outside Ballinasloe, Co. Galway, was interviewed by Sligo and Donegal press following the ordeal and he paid tribute to Brady and the manner in which he handled the boat when all seemed lost. Brady’s experience had kept the boat from drifting broadside on to the wind and so prevented the huge waves from swamping the vessel.¹

Firsthand experience and experience handed down as lore can saves lives when the elements turn against you at sea. Communities along the west coast read the signs given to them from nature to forecast upcoming weather conditions. Martin Brady was from Grange and Dan Waters was from Lislary, both by the coast. Weather lore for these areas is recorded in The Schools’ Collection on Dúchas.ie. At Lislary, locals watched the shore in the north and if it was lively in winter it was a sign of frost. If the same shore was noisy in summer or autumn it was an indication of the arrival of dry but cold weather. High-flying sea birds were an indication of approaching poor weather. If the top of Knocknarea mountain was clouded, you could expect rain. If Inishmurray island appeared so near that you could easily discern all its houses, you could expect rain. People watched how smoke rose up through the chimney in the house as they believed it pointed to certain oncoming weather. Noting the character of the sun could reveal the weather for the following day.²

Joe McGowan included the story of the three men’s escape from the stormy sea in his book Inishmurray Island Voices. Joe notes that prior to Brady taking over the postal service, the McCanns of Milk Harbour carried the post to Inishmurray.³ The McCanns were acknowledged as one of the leading boat building families in the north west of Ireland. The National Museum of Ireland – Country Life acquired the McCanns’ boatyard contents in 2014. 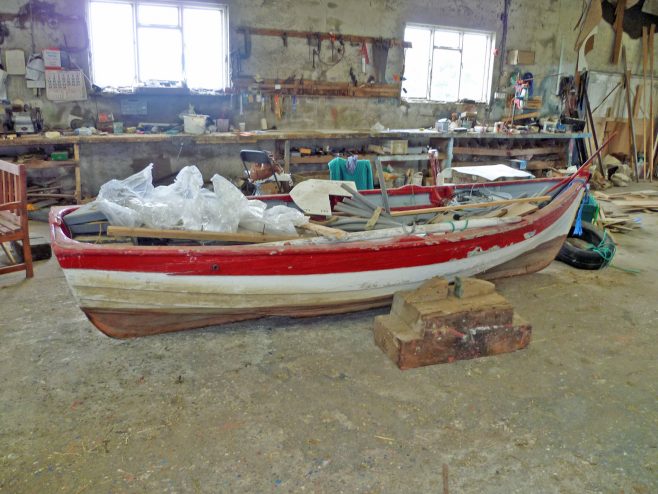 My thanks to Joe McGowan and to the Irish Independent for use of their image.