You are here: HomenextExplore our archivenextTopicsnextTraditional Boats of Ireland’s Wild Atlantic WaynextClare students get a taste of the sea on Lough Derg

Clare students get a taste of the sea on Lough Derg

One of the attractive characteristics of the currach is its accessibility. They are relatively easy to transport and handle on the water which makes them a growing favourite for recreational rowers. I travelled to Mountshannon in County Clare recently to join students and teachers from the Raheen Wood Steiner Secondary School as they rowed their way up through Lough Derg in beautifully-built west Clare currachs.

I parked up at Mountshannon Harbour where the ever-helpful John Tynan of Naomhóga Chorcaí had arranged for me to meet fisherman and gentleman Tom Coleman. John had also assisted the school in organising the day. Tom kindly gave up his morning to taxi me in his boat and share his knowledge of Lough Derg. 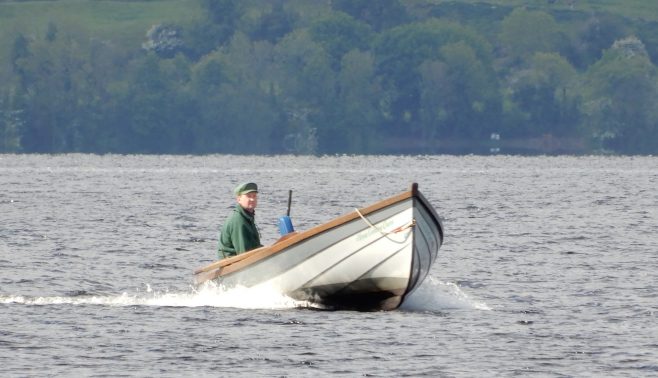 Tom took me south on the lake to Knockaphort where the school was taking a break from rowing. The weather was exceptional and the students were clearly enjoying the novelty of rowing the old boat type. Some of the currachs being used were made by the well-known Clare currach building brothers James and Alan Madigan. Other currachs were borrowed from owners in Kilkee and Kilrush. The quality of the boats no doubt added to the students’ experience. 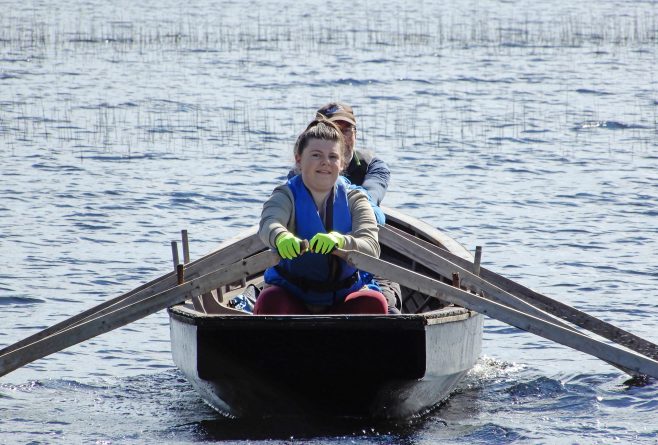 At Knockaphort, I met class teacher Caroline Kelly who was central to organising the day for the students. Caroline explained the great work that was carried out to get the students to this stage of rowing. Two years ago students at Raheen Wood Steiner Secondary School learned about the history of boats in Ireland through the building of a currach from scratch. After it was built they went to the Viking Ship Museum in Roskilde in Denmark where they looked at Viking boat building techniques and went for a row and sail in a replica Viking ship. As the pandemic gripped and restrictions were introduced, it was clear that a class rowing trip with Naomhóga Chorcaí in Cork would not be possible. Unbowed, Caroline and John Tynan hatched a plan to bring the currachs to the students and thanks to the generosity of both the Kilrush and Kilkee currach clubs and Padraig Giblin of Derg Isle Adventure Centre, their plans came to fruition. 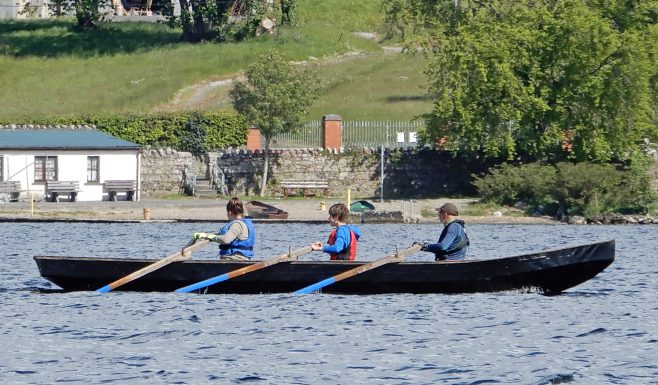 After so much time online during the pandemic, the school’s teachers felt that the students needed a physical challenge. A currach row in the fresh air and beautiful surroundings of Lough Derg was a perfect way to achieve that. Caroline and the school now plan to fundraise so that they can build their own currachs, keep them on Lough Derg and get every student rowing as part of the Physical Education (PE) curriculum for the foreseeable future.

Also at Knockaphort I met Liam Murray, a fishing guide from Mountshannon. Liam is hoping to set up a currach rowing club in the area. He plans to get several Kilrush currachs built especially for the club. 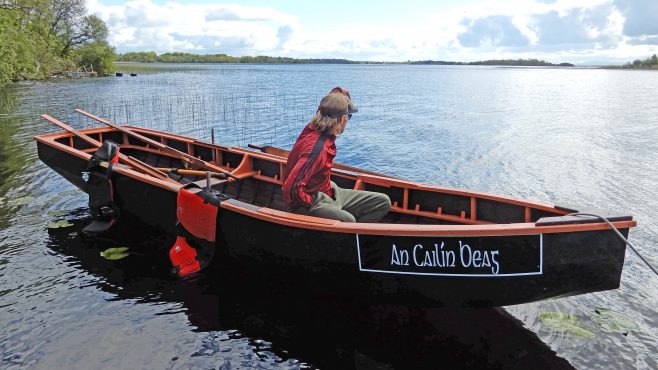 Moving out from Knockaphort, Tom informed me that burials still take place on Inis Cealtra (Holy Island) on Lough Derg and that livestock is still transported out to the island using a ferry/platform. 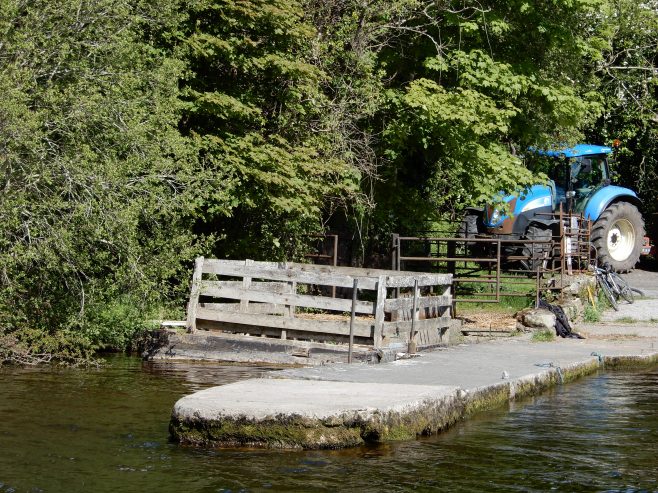 As the students rowed up to Cloonoolia Bay, they were joined again by Padraig Giblin of Derg Isle Adventure Centre who was guiding the school. Padraig had very generously allowed the students to use his centre as a training base in preparation for the class trip. Padraig has an impressive knowledge of the local area and was directing our attention to points of interest. 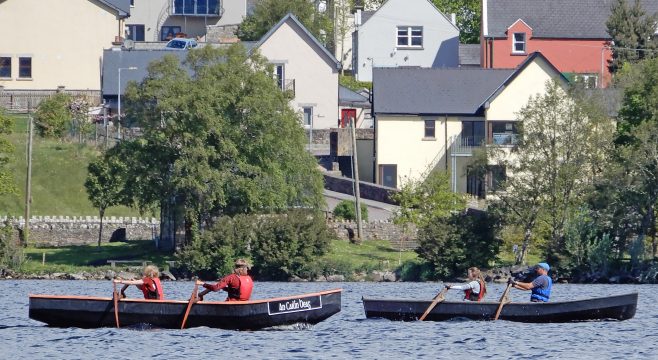 At Cloonoolia Bay the children took another rest and I got a chance to photograph the remaining currachs being used on the day and to talk to John about them. Three of the currachs were James Madigan built – a three-hander, a sleek two-hander named ‘Tomás’ and a two-hand fibreglass boat. Another two-hand fibreglass boat ‘An Cailín Beag’ was built by James’ brother Alan, using moulds supplied by James. Four other boats from Kilkee and Kilrush made up the gathering.

I left the students and teachers of Raheen Wood Steiner Secondary School as they carried on up further north into Lough Derg. I had travelled to meet the school that day on the lake as I thought it a fantastic way to introduce our younger generation to our traditional currach without the necessity of having to travel far or even to the ocean. A currach does not care whether the water it’s on is salty or fresh. Fortunately, Ireland is surrounded by the former and peppered by the latter.

My thanks to Raheen Wood Steiner Secondary School, John Tynan of Naomhóga Chorcaí and Tom Coleman.