The name of John Flanagan, Kilbreedy remains famous to this day as an athlete of world renown who dominated his specialised discipline of hammer-throwing at the commencement of the 20th century. But he was not the only Kilbreedy Flanagan who left his imprint on posterity… brother Thomas was a successful businessman, an elite sportsman in his own right, and – what is the principal motivation for the publication of this article – the manager/trainer and what might be called in modern parlance the psychological bedrock, of two of the most storied and charismatic athletes adorning the early 1900s.

Tom Flanagan’s birthdate is recorded as 8th January 1878; however, in the Bulgaden/Martinstown baptismal record published in John Flanagan (2001), the date referenced is 30th Dec 1877. Perhaps a case of delayed registration.

It is the association with Tom Longboat (1886/7-1949) which generates the greatest degree of local interest. The fabled Canadian’s arrival to these shores was covered in a Cork Examiner article dated 22nd June 1908:

Longboat, the great Indian runner, has arrived at Kilmallock, where he will train for the Olym-
pic Marathon Race, which will be held in London on July 24th. He is accompanied by his
manager, Tom Flanagan, brother to the famous hammer thrower, John Flanagan. Longboat is
of the tribe of Onegan (sic) Indians, Canada, while Flanagan was some time since received into the tribe with an amount of display appropriate to the occasion; consequently they form a very interesting combination that even apart from athletics must be regarded with a share of attention.

Longboat is quite young, about 20 or 21 years of age, 5ft. 10ins. or 5ft. 11ins. in height, with
a symmetry of mould and an ease of movement that betoken swiftness. There in little or nothing in his appearance that to the casual observer would distinguish him from the rank and file of people who move on our thoroughfares every day. When word went round that an Indian was coming people conjured up pictures of what he might be like, but when they ultimately found that he was very much like themselves, they were disappointed, for they expected something extraordinary. Mr. Longboat enjoys the reputation of being the long distance runner of the world; he has never been defeated, and his manager (Flanagan) has high hopes that he will secure the Marathon Race. He is stated to be able to cover 45 miles in less than five hours, one of his greatest feats being the winning of the King’s Race in Canada about two months ago, in which he beat twenty-five competitors in the presence of 200,000 people.

Flanagan and Longboat know each other for some years, and they seemed to understand each other very well, for it came about that Flanagan went out and joined the tribe, which fact was referred to some months ago in the “Examiner”. His introduction to the tribe was the
occasion of a ceremony of much pomp; this was as it ought to be, as it is stated that with the
exception of a high personage, Mr. Flanagan is the only white man who was over admitted to
the tribe, and this signal honour was in recognition of his having introduced an Indian to civi-
lised society. In the initiation of Mr. Flanagan much formula was observed, in the course of
which he was christened and received the title of the “Keeper Awake.” Since his arrival in
Ireland, Mr. Longboat has been very pleased with his surroundings, and he took the attention
paid to him and Mr. Flanagan with an easy grace. Mr. Longboat is not fond of speaking,
but he can convey his thoughts in very clear language, as may he gathered from his reply to
some complimentary references to him. He said: – I am at a disadvantage of not knowing your language thoroughly, but if you were placed in my position you would be equally at a disadvantage. All I can say is that my heart thanks you -.

People will have an opportunity during the coming week of seeing Longboat at practice;
he will run from Limerick to Kilmallock, and it is understood that Tom Flanagan will present a
cup to be won by any man who should afterwards beat the time in which Longboat will cover
the journey. John Flanagan. the world’s famous hammer thrower, is expected in Ireland in a few weeks, and everyone who knew the genial soul will be glad to meet him. He will also compete at the Olympic Games. Tom Flanagan, though not having won such fame in the athletic arena as his brother, yet has a long connection with the pastime; he started an athletic club in Canada which has attained much success, and is known as the Irish-Canadian Athletic Club.

The arrival of Flanagan and Longboat was awaited at Kilmallock by many friends of the
former, who gave them a very hearty greeting.

A young man named James Ryan read the following: – “On behalf of the people of Kilmallock, the birthplace of the mighty John Flanagan. whose brawny arm has often brought honours to his native land, and whose brow fame has often gilded with the crowning laurel, I tender a hearty welcome to Mr. Thomas Flanagan and Mr. Longboat on their visit to our Green Isle. We belong to a race which holds in admiration all athletic prowess, for many a giant of weight-throwing and many a speedy runner have we had in our midst; and, need I say, that all the debt of welcome is on our side on this happy occasion. As for Mr. Thomas Flanagan, it is sufficient that he is a native townsman, whose brother is John Flanagan, champion of the world, to receive from us that output of hospitality which is natural heritage.

To Mr. Longboat we give the gradh of our Irish hearts. We have heard of his name, and we
hope that the action of that noble race, which once peopled the American prairie, will carry himself superior to every competitor at the coming Olympic Games. It is a singular coincidence that two members of two down-trodden subject races should be such heroes in the athletic arena, but if we ask for an explanation, we shall find it in the dominant influence of their innate manhood. Long may the Irishman work side by side in every field of life in friendship and esteem with the American, and may the strains of the ‘Star Spangled Banner’ (?) and ‘God Save Ireland’ make the welkin ring for many a coming year. Again, with all the esteem and hospitality of which we are capable, we tender you a thrice hearty welcome to our land.”

Mr. Thomas Flanagan returned thanks for the hearty reception accorded to himself and Mr.
Longboat, and expressed the opinion that Mr. Longboat would be successful in the coming
great contest.” ©Irish Newspaper Archives

Tom Longboat’s training runs through the Coshlea countryside, in preparation for the 1908 London Olympic Games, have passed into local legend. The first of significance among these took place on 29th June 1908: 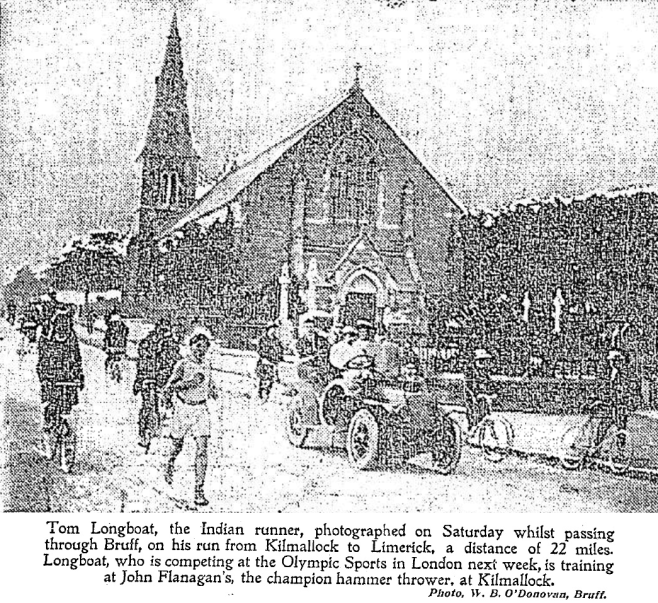 The second and most high profile, albeit outside Coshlea, took place on Saturday 4th July 1908, and was captured in the celebrated photograph above, accompanied by the following detailed account.

Preparations were completed with a third excursion on 16th July – eight days later Tom Longboat’s attempt to wrest the Olympic Marathon crown ended in failure; a circumstance which has given rise to much conjecture subsequently, although the reasons proffered at the time were more mundane [Chicago Citizen, Toronto Star].

The passage of thirty years did not dim the memory of Tom Longboat’s Limerick sojourn: 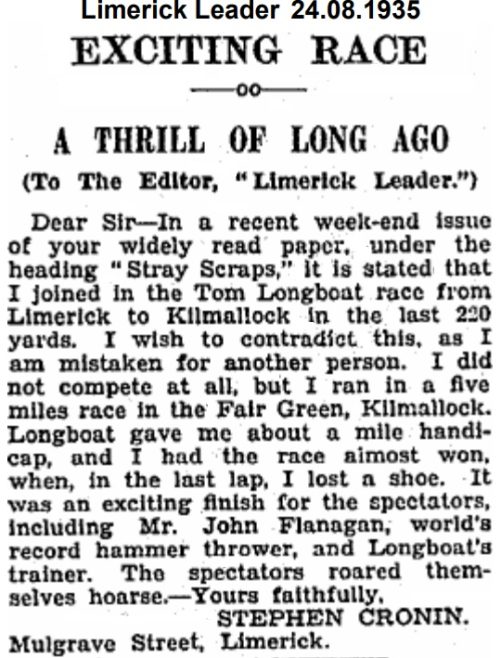 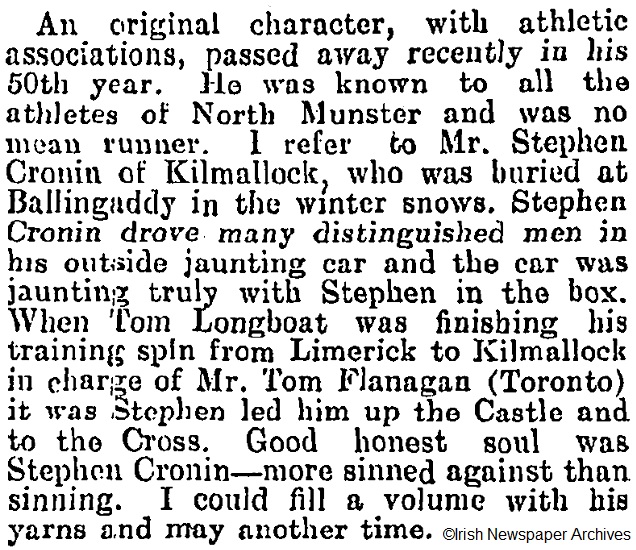 {As can be seen, an untruth can be halfway across the world before its reciprocal has its boots on… } 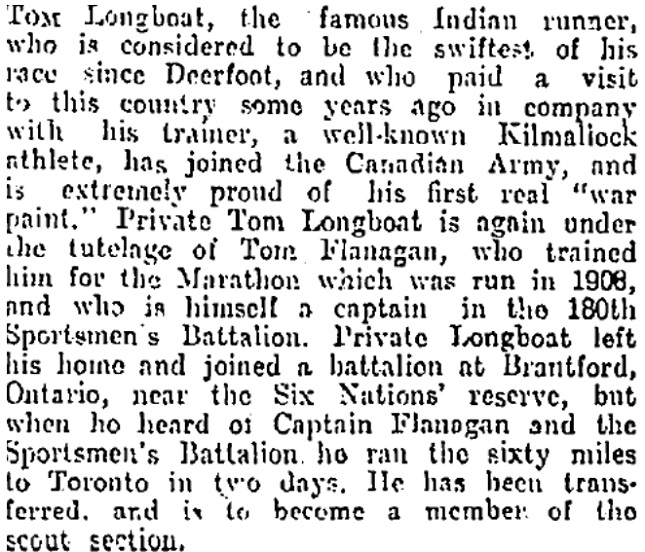 Part one above, in particular, makes reference to the rumours which swirled around Tom Flanagan’s possible complicity in the demise of Longboat’s marathon-winning ambitions. Further such whispers arose in connection with his involvement in the career of his next top-level sporting associate, the heavyweight boxing champion Jack Johnson (1878-1946). Nothing will ever be proven at this juncture, but it seems safe to assume that the world of high-profile promotional dealings, for what were then, and now, vast sums of money (in Longboat’s case, post-Olympics), is a cut-throat business and not an arena suitable for the faint-hearted.

A fascinating interview with Tom Flanagan was carried in the columns of the Limerick Leader, dated 23rd June 1911. Following his emigration around 1895, his trips home were much more frequent than would have been the norm in those times.

Half a century later, Tom Flanagan’s central role in the Jeffries and Willard fights were descriptively recounted in the Irish Press  –

Return voyages to the home country continued well into the ‘thirties, and a list of his house calls on a 1937 visit shows how favourably he continued to be looked upon:

John Flanagan died in June 1938, but Tom is not listed among the mourners at his legendary brother’s funeral obsequies in Ballingaddy. 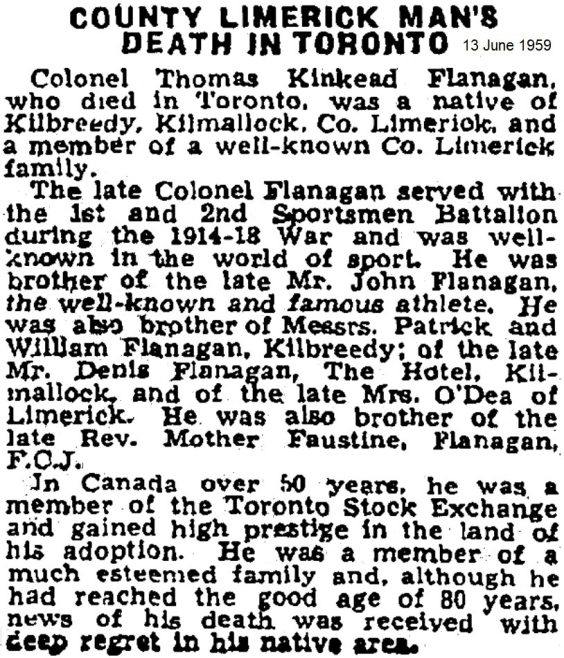 The cacophony of the running track and the frenzy of the boxing ring was now silenced, but Tom Flanagan had more than earned his chapter in the pages of history.