We are grateful to Mr Barry O’Neill, Killiney Co. Dublin, for providing this history of the Glebe House (NIAH), which served as his own family’s residence for a time during the mid-20th century

My parents, John O’Neill and Kathleen Hill were married in Ballinasloe in 1942. My father was transferred to the Kilfinane Branch of the Munster and Leinster Bank around 1941, having originally joined in 1929. My older brothers Paddy and Fergus (twins) were born in the Glebe, Kilfinane in 1943, followed by my sister Geraldine and I, also twins, in 1946. Sadly my dear brother Paddy passed away in 1998 and is buried in Kilfinane. Sometime around 1949, our mother Kitty became sick and she subsequently moved to Ballinasloe. We, the children, remained in Kilfinane. On the 9th of June 1951, mother Kitty died in Ballinasloe and is buried in the Hill plot in Creagh cemetery.

My memories of Kilfinane are faint but I recall Dinny Moroney, the farmer who lived across the road from us. Dinny had a Model T Ford car and used to turn off the engine when he was coming down the hill. I remember the National School up the road but I cannot recall going there. I think Geraldine and I went to the Convent School until we moved to Tullow. Sr Celsus taught there; she was a great friend of my mother and my aunt Ivy and remained constantly in touch with them during my mother’s illness. On one occasion I can remember that Mr O’Shaughnessy, the owner of the Glebe, had us children digging weeds in the driveway and I think for that we got an ice cream each. My father’s local was McCarthy’s, who also happened to be the local undertaker, and I can recall being in the kitchen there with empty coffins in it. Henry McCarthy, their son, was a great friend of my brothers. In 1954 my sister Geraldine and I received our first Communion and it was about then that my father was transferred to the Bank’s office in Tullow, Co Carlow. 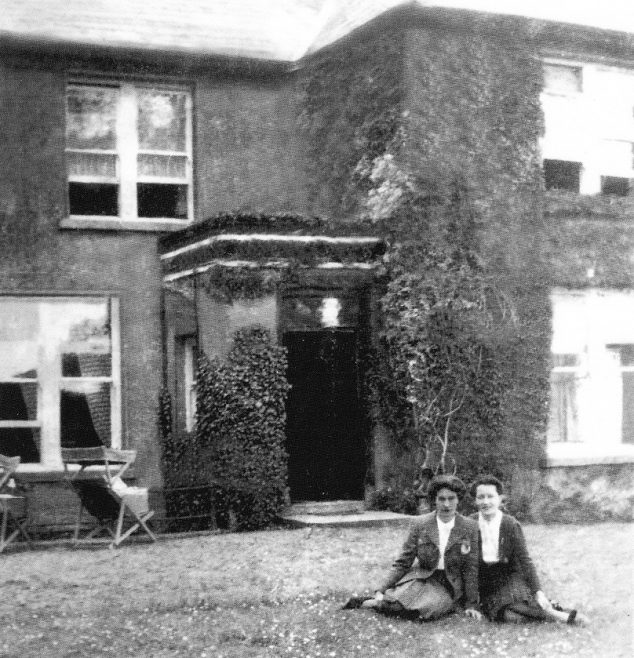 My Mother and Aunt Ivy at the Glebe

As I said earlier my parents moved to the Glebe in Kilfinane around 1941. The following was a little information I dug up on the Glebe:

The first recorded mention of the Glebe was in Lewis Topographical Dictionary of 1837:
“The parish comprises 9340 statute acres, as under the tithe act, and valued at £5679 per annum. The principal seats are Spa Hill, the residence of W. Oliver, Esq.; Spring Lodge, of W. Collins, Esq.; Bossonstown, of G. W. Bennett, Esq.; Kilfinane House, of C. Bennett, Esq.; and Brookville Cottage, of T. Massey, Esq., M. D.

The living is a vicarage, in the diocese of Limerick, united by act of council to the vicarage of Daragh, forming the union of Kilfinane, in the patronage of the Earl of Cork, partly in whom and partly in E. Deane Freeman, Esq., the rectory is impropriate. The tithes amount to £270, of which £105 is payable to the Earl of Cork, and the remainder to the vicar; but the rectorial tithes of Bossonstown, Bosnitstown, and Moorestown, amounting to £60, are payable to E. D. Freeman, Esq. The church was rebuilt in 1760, and is a large plain edifice.

The glebe house was built in 1813, for which the late Board of First Fruits gave £400 and lent £386: the glebe comprises 4.5 acres. In the R. C. divisions the parish is the head of a union or district, comprising the parishes of Kilfinane, Particles, and Ardpatrick, and containing two chapels, one a large plain building at Kilfinane, erected in 1835 at an expense of £1000, and one at Ardpatrick. About 200 children are educated in two public schools.”

The Glebe, described as house, office (outbuildings) & land, was recorded in the Land Valuation Books as freehold on 7a/1r/20p. A further piece of land attached was also held by the Rev. Ellard of 2a/1r/20p with the Immediate Lessor being Trench/Gascoigne.

A further piece of office & land nearby of 6a/3r/30p was also held by the Rev. Ellard with the Immediate Lessor being the Earl of Cork & Orrery. This was acquired by Margaret/Denis Moroney in 1943.

The properties were located in the Parliamentary Division of East Limerick, Townland of Kilfinane, Poor Law Union of Kilmallock, DED of Kilfinane, Barony of Coshlea. The major landlord at the time for the surrounding area was Charles Oliver.

The Board of First Fruits was an institution of the Church of Ireland that was established in 1711 by Queen Anne to build and improve churches and glebe houses in Ireland. This was funded from taxes collected on clerical incomes which were in turn funded by tithes.

In the Census Return for 1901 the Glebe House was described as a class 1 house with up to 11 Rooms.

Returning to Rev Ellard, We know that he had received a BA from Trinity College in 1795. The Parish Register 1800-1812 shows that he married Miss Frances Anne Bennett (died 1814) of Bosnetstown on 26/11/1806. They had three children all baptised in Kilfinane Parish –

On 3/12/1814, the following was published in the Limerick Evening Post:
“Died on Thursday morning at Kilfinane Glebe after a lingering Illness, Mrs. Ellard, wife of the Rev. James Ellard and sister of George Wheeler Bennett of Bosnetstown, Co. Limerick”.

From the Limerick General Advertiser in 1819, it was reported that the Rev. J. Ellard, the Glebe, Kilfinane contributed £2.5.6 to an £800 reward offered for the apprehension of the killer of the Rev. John Mulquinny [Mulqueen], P.P. of Ballinavana, County Limerick.

In 1821 fragments from a lost Census Return of Kilfinane stated that:
“House no. 29, Feevis? Street, 3 Stories High. The Rev. James Ellard, Aged 47, with 9 acres attached. This man lives in the Glebe House. The incumbent does not live in the parish” –  author’s note “This Ellard was married to one of the Bennetts” – (This refers to the landed family of G. W. Bennett of Bossonstown or Bosnetstown).

In 1834 the Limerick Chronicle reported the death from cholera at Kilfinane, of the eldest daughter of Rev. James Ellard.

On 28/12/1882, the Limerick Chronicle reported the death of the Rev. George Wren with the following commentary:
“It is with great regret we have to announce the death of the Rev. George Wren A.M., Rector of Kilfinane. The sad event occurred yesterday. For the last two years or more the Rev. Gentleman has been suffering from an attack of paralysis which for a long time confined him to the house. The recent severe weather must have hastened the end. There are few clergymen who have been so deservedly popular as the Rev. George Wren. Not only was he looked up to and respected by those of his own church, amongst whom he ministered for very many years. But he was equally beloved by all classes. The poor ever found in him a kind and sympathising friend nor was his assistance limited to advice or words. Gentle unassuming, and retiring to a degree, wholly devoted to his masters service, untiring in the duties of his sacred calling, we may say his life and character adorned his profession. He was essentially a good man, and in many points resembled that touching picture of the village pastor in Goldsmiths Auburn.

The poor particularly will miss this most excellent gentleman, and all will deeply feel the severance of those many ties which the blameless life of fifty years in Kilfinane had strengthened from year to year. His whole ministerial service was spent in Kilfinane. He was ordained curate in 1838 and was presented by the Earl of Cork with the living in 1843. The bereaved family we are sure have the sympathies of all in their affliction, in which we most sincerely join. The funeral will take place to-morrow at 12 O’clock.”

Another commentary made by an unknown clergyman at the time of the new Irish Constitution was as follows:
“Two years after my ordination, the Fenian Rising occurred; this took place in 1867. I saw something of it, not of the Fenians themselves, but of the flying columns which were then scouring the country in pursuit of them. The police barrack at Kilmallock was attacked, and Protestant gentry living near Kilfinane in the same county, viz., Limerick, left their houses for several nights and took refuge with the Constabulary. There was at that time living at Kilfinane as rector, the Rev. George Wren. He was, as a clergyman, greatly beloved and respected.

When some of his parishioners, most of them gentry, were leaving their homes for police protection, the Roman Catholic farmers in the parish waited on the Rev. George Wren at the rectory, and begged and entreated of him not to leave it, assuring him that “no one should lay a wet finger on him or any member of his family”. In consequence of this interview the Rev. Mr. Wren held his ground, and was the only Protestant gentleman in the immediate district who did so. It was exceedingly creditable to him, and to the deputation who waited on him. I have never forgotten this incident”.

In 1886 the Limerick Chronicle reported that the Rev. Read, Kilfinane, attended the funeral of a Miss Luther, Ballyorgan Rectory. The Census of 1901 included the Rev. Francis Read/Wife Kate/Daughter Evie aged 20 as living in Glebe and from that record we can calculate that he and Kate married in 1876.

He was appointed Rector of Kilfinane in 1914. The Land Valuation Book entry records the date of change of this new resident as 1915. In 1937, the Rev. W. R. Kiellor, Rector of Kilfinane, died at the Victoria Hospital, Cork, aged 65.

The next change of owner was Daniel O’Shaughnessy in 1941.

Daniel F. O’Shaughnessy, Glebe House, Kilfinane, Co Limerick was a volunteer, Kilfinane Company, during the War of Independence from 1918-1921. He gave a witness statement to the Bureau of Military History in 1955, regarding IRA activities in County Limerick during the above period. The records can be accessed online at the Bureau of Military History, file No. S1125.

Which brings us to the next residents of the Glebe – the O’Neill’s – and completes my account of this fine and storied building. I will finish with an old Irish saying: