On 16 September 2022, a plaque was unveiled to honour the athletics career of John Downes, Kilfinane; champion middle and long-distance athlete of the late 1950s and early 1960s. The plaque is located on the wall of the Marian Shrine at the Laught Street/ Mill Road cross, and also marks the starting-point of the John Downes Trail Loop, which was inaugurated on the same evening and consists of an 8.2km stretch of roadway used by John for training purposes more than 60 years ago. 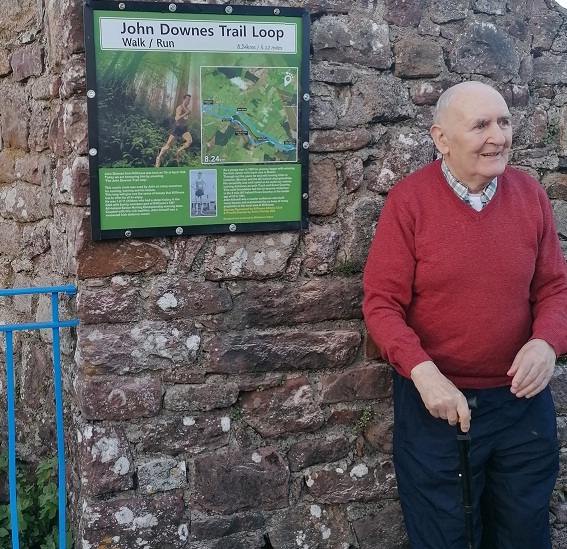 The following excerpts from contemporary sources chart the rise to athletics prominence of this noted Kilfinane athlete, culminating in his annus mirabilis of 1961, when he captured six national titles over a variety of distances.

All articles courtesy of and copyright to: Irish Newspapers Archives. 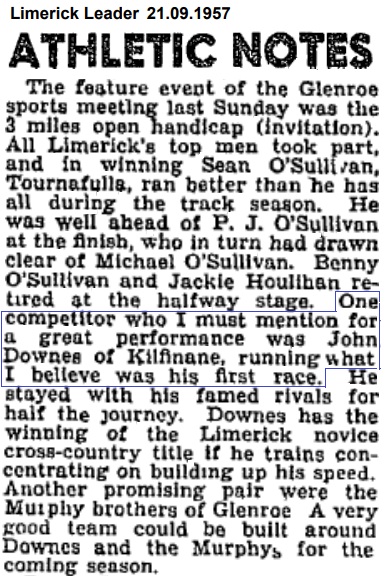 JOHN Downes, 20-year-old Kilfinane athlete, competing in the green and black singlet of Glenroe, and Kilmallock, competing on their home course, won the individual and team awards, respectively, at the Limerick Novice Cross-country Championship at Kilmallock, on Sunday last, over a four miles course (three laps) of the local racecourse by kind permission of the landowner. Over 120 runners, from eight clubs, faced the starter.

The race for individual honours was fought out mainly between the first five. Just after the final lap had been completed John Downes took the lead. At a later stage he was passed by his clubmate, John Meade, who, incidentally, is eligible for the youths’ grade next year. With less than a mile to go, the greater experience of Downes told as he passed Meade, with fifteen seconds to spare at the finish. The winner’s time was 20 minutes 45 seconds.

The leaders at the end of one lap were – John Downes (Glenroe AC), Patrick Gammel (Blackboy), John Meade (Glenroe) Joseph Phillips (Kilmallock), Patrick O’Regan (Limerick). Kilmallock packed fairly well all the way and all improved their positions during the final lap.

MUNSTER NOVICE CROSS-COUNTRY CHAMPIONSHIP
Cork, with a total of 34 points – the best ever scored in the championship – took the team award at Tramore on Sunday, when the Munster Novice Cross-Country Championship was held over four miles of Tramore racecourse. The event took place in a continuous downpour, but 55 of the 60 runners completed the course.

Individual honours went to 20-year-old John Downes, Limerick, holder of the novice cross-country title in his county and runner-up in Limerick junior event. Fintan Walsh, Waterford, finished second, and Cork novice, Denis Lucy, junior and senior champion, was third. There was a terrific fight for individual honours from the very start by Downes, Walsh and Lucy. 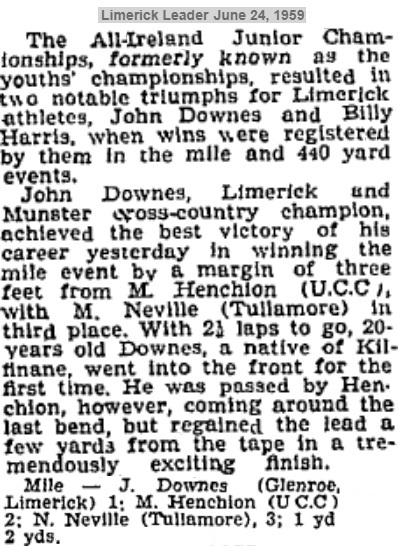 LIMERICK recorded their first victory of this season in Inter-county competition when, at Kilmallock, on Sunday, they scored a narrow victory over Tipperary in the Munster Senior Championship, after a closely-contested race over the full distance of eight miles, approximately.

Willie O’Dwyer, Holycross, had the easiest of victories in the senior event when he beat teammate, J. Bourke, into second place. John Downes (Kilfinane), who now wears the Killmallock A.C. colours, was the surprise packet of the race when he moved up over the final laps to beat team-mates, Michael O’Sullivan and Jackie Houlihan, for third position. 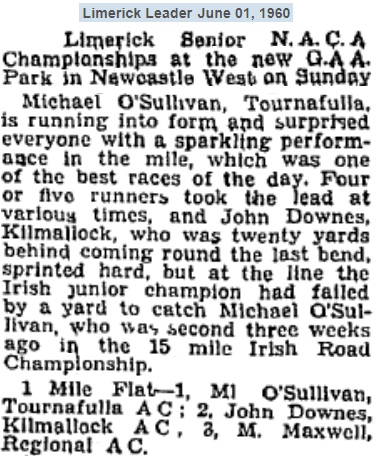 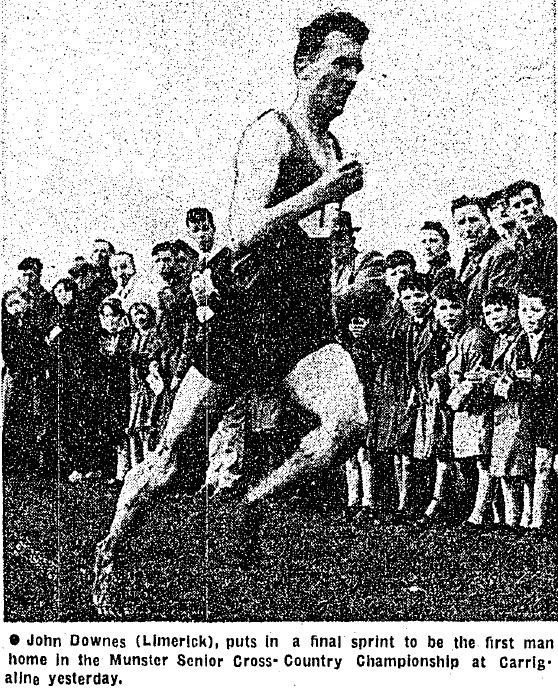 JOHN DOWNES, Kilmallock A.C., in winning the Munster Senior CC title over a gruelling course at Carrigaline, Co Cork, on Sunday last, displayed good racing tactics, and a coolness to wait until near the end to make a race winning move.

Limerick retained the team title for the third successive year, when they beat Cork by 19 points, but what a battle they had from this young and inexperienced Cork team before they achieved their biggest winning margin since the event was inaugurated in 1958.

The race was meant to be over nine miles, but was well over ten miles, and this included two freshly ploughed gardens which had to be covered seven times. A number of the Limerick ream suffered from cuts, received from sharp stones in the gardens.

FLYING START.
Right from the start Cork were forcing the pace, but after about a mile the order was Pat Considine, Kilmihill, Irish track 3, 4, 5 miles champion, and the Limerick titleholder, John Downes. Shortly afterwards, Malachy Maxwell with an amazing burst of speed joined Considine and Downes at the front.

Even nearing the half-way stage Limerick prospects were far from good, but Munster novice champion, Pat O’Regan, set the pattern for the rest by tackling the five red-vested Corkmen. At the decisive point of the race John Downes suddenly drew clear from O’Halloran with Considine dropping back. Downes was a worthy and popular winner by 150 yards of his first Munster senior title.

All-Ireland senior cross-country Championship honours were gained in glorious manner at Killenaule on Sunday last on a fine day for the sport, by John Downes, Kilmallock A.C., individual winner by 200 yards. Team honours were won by Limerick in a facile manner for the third time in five years when all the scoring six finished in the first fifteen places, for a total of 43 points. Holders, Galway, totalled 97 points, but truth to tell they were never in the hunt after the first lap.

Power-packed Display.
Teams, from Kildare (Leinster champions), Dublin, Louth, Galway (Connaught holders), Limerick (Munster champions), Tipperary, and nine individuals, lined up for the start, and nearing the end of lap one (6 laps for nine miles) it was obvious that the Shannonside County were going to take some holding, as John Downes, showing tremendous confidence, was at the head of the leading group, which consisted of Sean O Sullivan (Tournafulla), holder Matt Rudden (Dublin), Pat Considine (Clare), and Sean Cullen (Louth).

Mick O’Sullivan was in close contact, while Pat O’Regan, Malachy Maxwell, Jackie Houlihan, were side by side holding down eleven to thirteen places. P. J. Cronin (Killmallock), 15th, and P. J. O’Sullivan, 18th, which meant that eight of the nine Limerick starters were in the first 18. The story of the rest of the race is an easy one to tell, from a Limerick viewpoint as each member held his own or improved a place or two, in the various stages of a contest run at a very fast pace, on a strenuous course.


Drew Ahead
On the second lap John Downes, Pat Considine and Matt Rudden become the dominating trio, before Considine fell back on the fourth lap. With two laps to go Downes drew away from Rudden and from that point onwards the 21-year-old Kilfinane man was a certainty to win his first All Ireland senior title, to add to his string of brilliant performances during the past three weeks when he has finished first in the Limerick Co Senior and first in the Munster Senior. On four Sundays previous to his greatest ever victory, he was only fourth in the All-Ireland Junior; such are the vagaries of form. Downes won by 200 yards and was as fresh at the end as he was as the start, and afterwards attributed his success to the interval training schedule which he adopted two months ago on the advice of P. J. O’Sullivan. 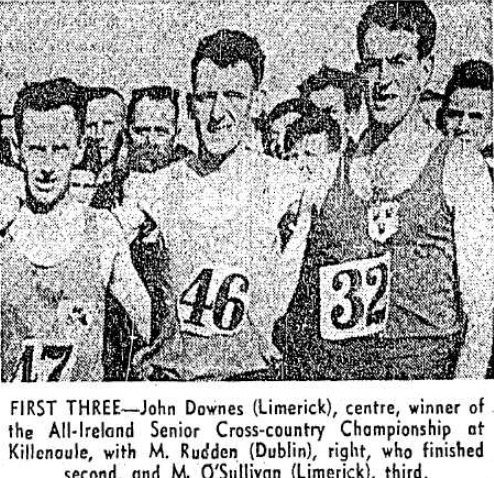 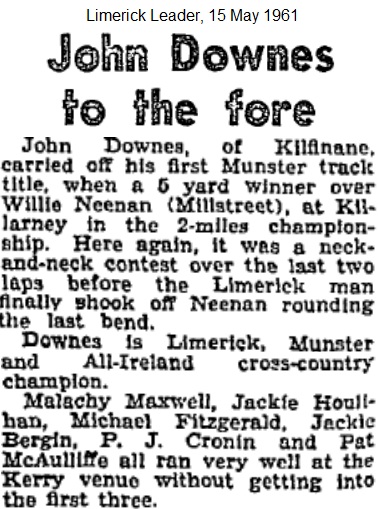 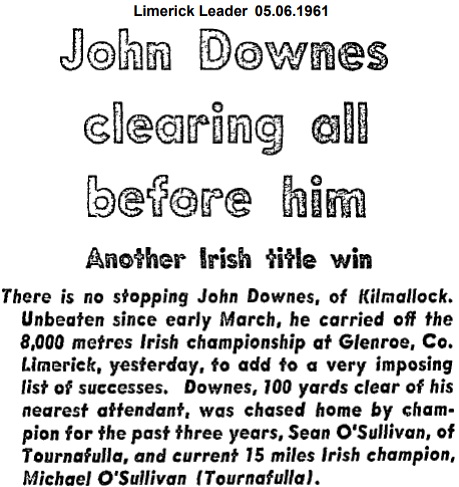 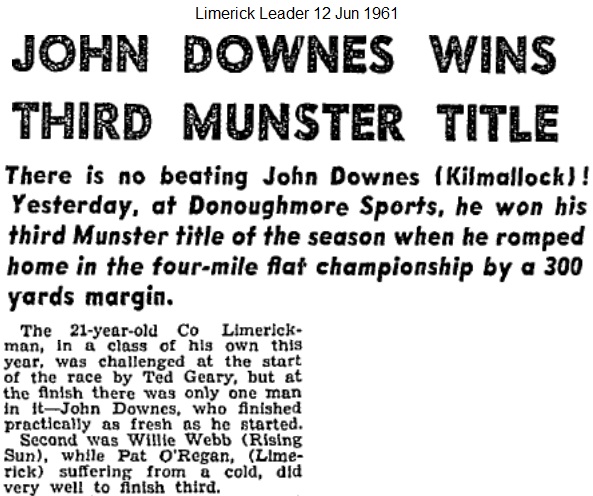 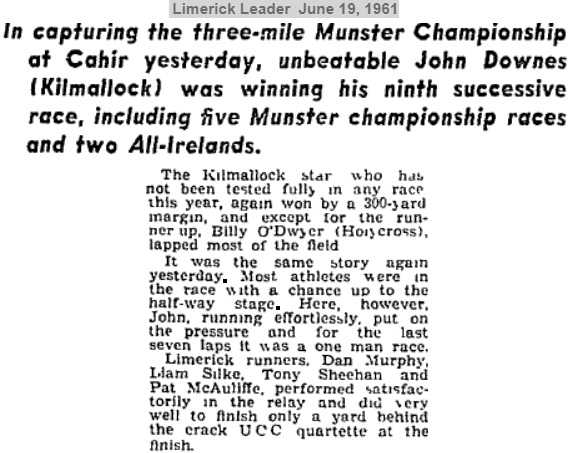 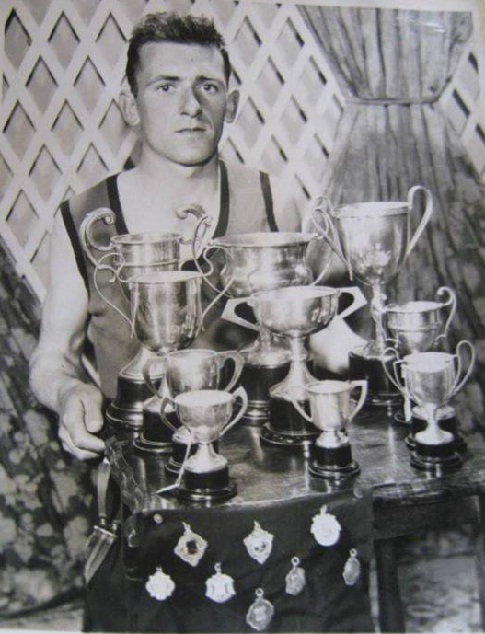 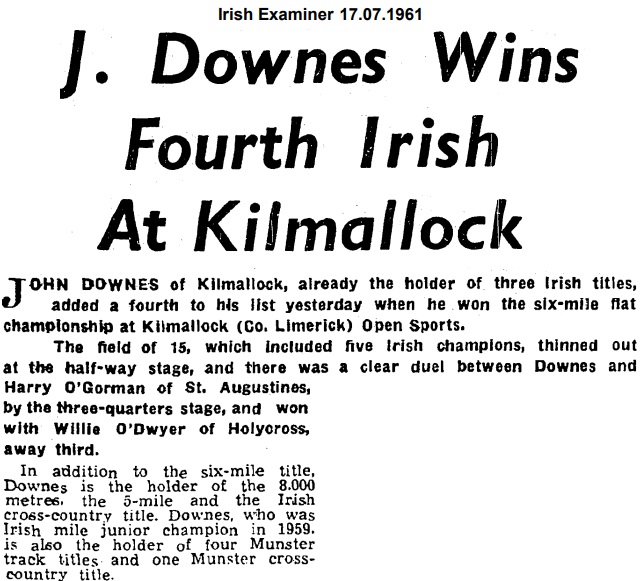 For Downes it was his fifth national championship of the season, and “P.J.” was scoring a repeat win in the event, which he has now won three times.

Downes, with a return of 19 minutes, 27 seconds, was only 7.4 seconds outside the native record set up by P J. McArdle in 1956. At the end of 15 miles there was every chance of Downes beating the existing record – 19 minutes 19.6 seconds – but the pace slackened for two laps, and despite a fast last mile, when he drew well clear of Harry O’Gorman, who seems destined to fill second position behind the Kilmallock man each time, Downes had little hope of doing a 64 seconds final circuit.

Other Limerick challengers in this race were Pat O’Regan, who finished fourth in a very good time – 20 minutes, 23 seconds – and Michael O’Sullivan (Tournafulla). It was O’Regan’s best performance to date over the distance, and judging by the improvement he has made this year, he is sure to be a force hereafter. 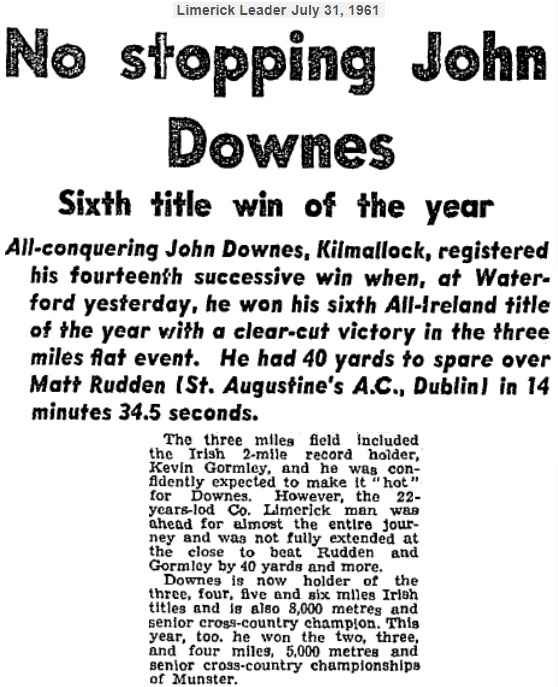 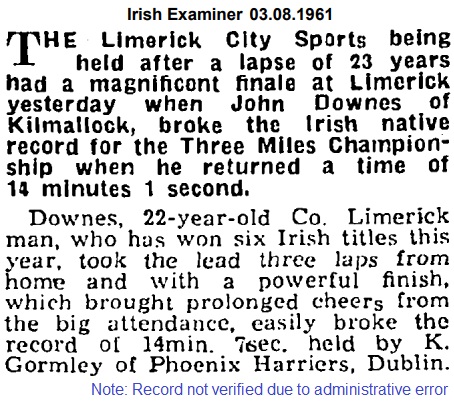 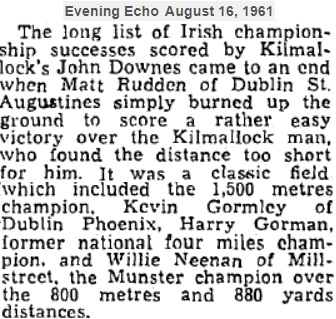 John Downes (Kilmallock), the star long-distance runner of the year, won the 3,000 metres flat championship of Munster from Pat O’Regan (Limerick A.C.) at Dromkeen sports before a large attendance yesterday. He completed a double when winning the mile open handicap by inches from Moss O’Connell (Moyvane).

Towards the end of August, John Downes’ successes were celebrated in his native place, as reported by the Tipperary Nationalist on the 26th of that month –

John Downes, the 22-year-old Kilfinane athlete, who runs with Kilmallock A.C. and has an unequalled record of long-distance flat running in Ireland this year, was presented with gifts to mark his achievements at the Maple Ballroom, Kilfinane, on Sunday night. His friends in Glenroe, with whose team he was affiliated a few years ago, presented him with a beautiful clock, suitably inscribed. Among other gifts was a track suit and shoes from the Maple proprietor, Mr. Wm. McAuliffe.

Mr. Roger Gould, Kilmallock, secretary of the Limerick County Board of the N.A.C.A., in the course of his report for the annual convention of the Board, refers to the position of athletics in County Limerick. He states that Limerick is the leading county in athletics in the N.A.C.A.

“Undisputed also,” he states, “will be my claim that in John Downes (Kilmallock A.C.), we have the greatest distance runner this country has ever produced.” They knew that such achievements did not just happen, but took a lot of time and very good foundation. Such foundation, he states, can only exist by catering for the youth, which we are doing and will continue to do.

1961 would prove to be the high point of John Downes’ career as, sadly, his father was diagnosed with serious illness towards the end of the year. Although John continued to participate intermittently during 1962, his training schedules were interrupted and athletic pursuits now became a secondary concern to work commitments. Henry Downes died in March 1964, while still in his fifties, but would have taken pride in witnessing his son write a memorable chapter in the long and colourful story of Irish athletics during that momentous season of 1961.

History would repeat itself for John Downes in December 1990 as his son John emerged triumphant at the National cross-country championship. The apple doesn’t fall far from the tree as they say! Victory at Killenaule was the latest in a chain of sporting success stretching back to Michael’s All-Ireland hurling crown in 1897, and guarantees the Downes’ family a noteworthy position in the athletic history of Kilfinane. 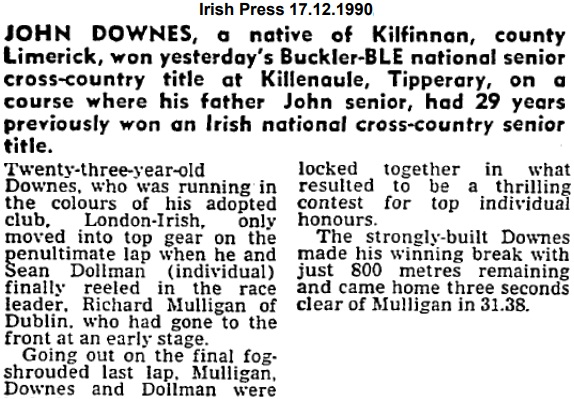