A phrase which repeatedly occurs in the Witness Statements of East Limerick Brigade members, as they recount memories of the War of Independence, constitutes the subject of this page, and from a curiosity to solve the riddle, derives its motivation.

It is through Tadhg Crowley alone that we obtain some fragmentary background information – ‘We returned to Mrs. Burke’s later that night. She was living in this house with her brother, two daughters and a niece…’ These morsels serve as supplementary corroboration for the facts which have been uncovered, and which follow below:

Anne Ryan appears, on www.genealogy.ie, with a registered birthdate of 25th June 1873, parents William and Catherine, and residence Kilfinane. The father’s profession is listed as ‘shopkeeper’, which is of subsequent interest.

The 1901 census shows John Bourke (also with an ‘o’), Hannah and daughters Mary and Katie. This is the last documentary evidence for John Bourke.

Searching has failed to uncover a suitable 1911 census match, nor has a putative death record been found, but it can be circumstantially asserted that Abbey graveyard, Ballyorgan was John Burke’s burial place. The following entry appears on historicgraves: 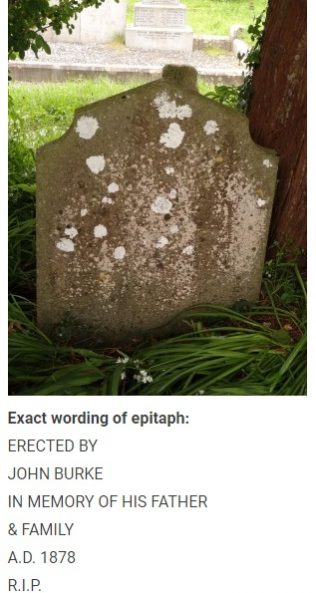 The 1911 Census shows Hannah, Mollie and Catherine, now residing in Kilfinane. Hannah’s occupation is listed as publican; as stated above, John Burke is not listed but Hannah is described as ‘married’ rather than ‘widowed’, which generates some uncertainty. However, in this context the statement, albeit some years later, by Tadhg Crowley that ‘she was living in this house… with two daughters…’, without mentioning John Burke, provides an additional identification link.

We could speculate at this point that there is a link between Hannah operating a licensed premises in 1911, and her father listed as ‘shopkeeper’ in 1873, both in Kilfinane and not Laurencetown. Was it the same building? A trifling legal case, outlined below in the Limerick Leader of 1st July 1910, mentions that Hannah also operated a grocery, which may give added credibility to this theory. 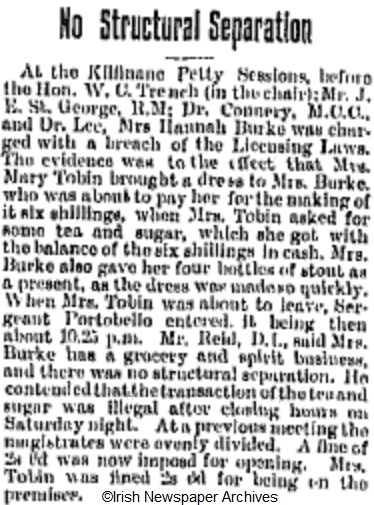 The evidence which goes the longest way to proving that the Hannah Ryan/Burke documented above, can be identified as the owner of the Laurencetown house frequented by I.R.A. Volunteers during the War of Independence, is contained in an article published by the Limerick Leader on 16th June 1934:

‘Hannah Burke, Laurencetown, Kilfinane, claimed £28 5s. for goods seized by the I.R.A. during the Anglo-Irish trouble. Plaintiff stated that the Volunteers used frequent her house during the trouble. They took a bicycle, a tent and eight trees saying they needed them. The trees were ash.

E. Barrett said he was an officer in the Volunteers at the time. The trees were taken in 1918. Joseph Crowley, a Volunteer, said he stayed in applicant’s house on several occasions. He probably took the bicycle although he could not recollect the incident.

[The E. Barrett mentioned here is very likely the Edmund ‘Tory’ Barrett who died following a bicycle accident on the Laurencetown road on 3rd November 1940]

It could be interpreted, based on the wording used in the above claim, that Hannah Burke’s co-operation with the I.R.A. was not entirely ‘voluntary’. However, this form of argument was a device frequently employed in the compensation courts of the time, generally with the assistance of the former Volunteers, and is to be expected with regards to the legalistic vernacular made use of in these cases.

One further link in the chain of identification appears in the following excerpt, courtesy Irish Newspaper Archives: 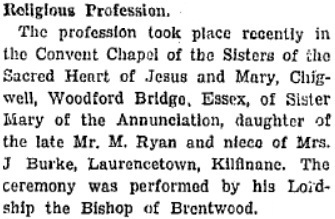 Dated 2nd October 1937, the ‘Mrs J Burke’ accords with the data previously furnished, and her brother Michael suitably appears in the 1901 census, along with their father William:

We can now say that Hannah Burke’s identity is established beyond reasonable doubt. She died on 13th April 1954, in Laurencetown; her listed age of 80 years proving accurate:

A relative of this writer recalls an occasion, possibly the funeral, when driving down the long snaking passageway ‘which we thought would never end’, to the house. This was the ‘Dardanelles’ of D.F. O’Shaughnessy’s recollection, an appropriate moniker for the winding pathway running parallel to the Loobagh river, that evidently evoked comparisons in the minds of the populace with the strategically significant waterway which sprang to fame during the then recent World War 1. With the funeral proceeeding to Abbey, it seems reasonable to assume that she joined her husband there, in proximity to the site referenced above. There is no other Burke headstone in the graveyard. Thus, in common with many notable personages of that era, there are no living descendants of Hannah Burke, Laurencetown. Her memory endures as a symbol of courage and resilience in troubled times. 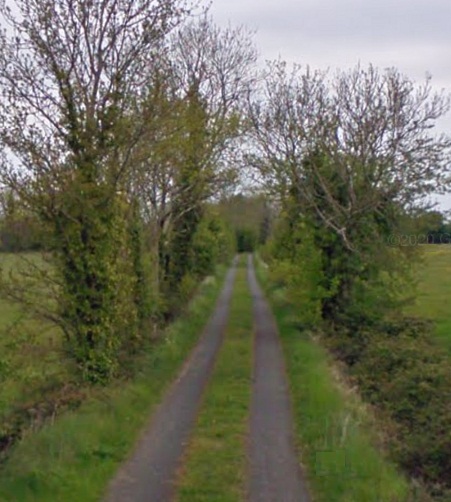