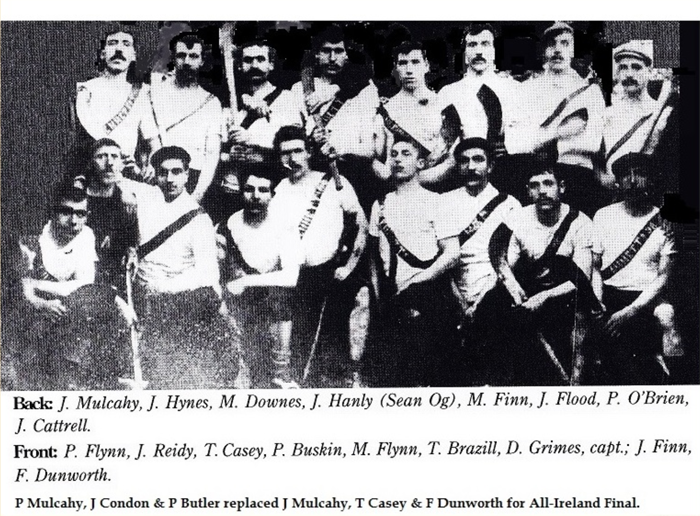 As of 2020, Limerick have won 8 All-Ireland Senior Hurling titles.* The honour of being the first to imprint their names on the scroll of history belongs to the Kilfinane selection of 1897. Championships frequently over-ran in those tumultuous early days of the GAA, and the All-Ireland Final itself did not take place until the 20th of November 1898, in Tipperary Town. The above photo is believed to have been taken earlier in 1898 (full-size image).

According to the GAA rules of the day, selectorial power over the make-up of the county team was in the hands of the title-winning club side of that year. Kilfinane Emmets earned said distinction with a narrow and controversial one-point victory over Cappamore, in the County Final of May the 1st 1898 –

Having survived the inevitable objection (May 9th), the Kilfinane selection now proceeded to the Munster inter-county championship as Limerick representatives. Late in the evening of June 19th at Greenpark Racecourse, they faced a crack Tulla outfit from Clare (who had won the Croke Cup the previous year, with the powerful Tubberadora from Tipperary being among their vanquished opponents). In what was effectively a Munster semi-final, Limerick emerged triumphant on the following scoreline:

The stage was now set for the Munster final against famed Cork kingpins Blackrock. A superb performance at Tipperary Town resulted in a crushing 4-9 to 1-6 victory – 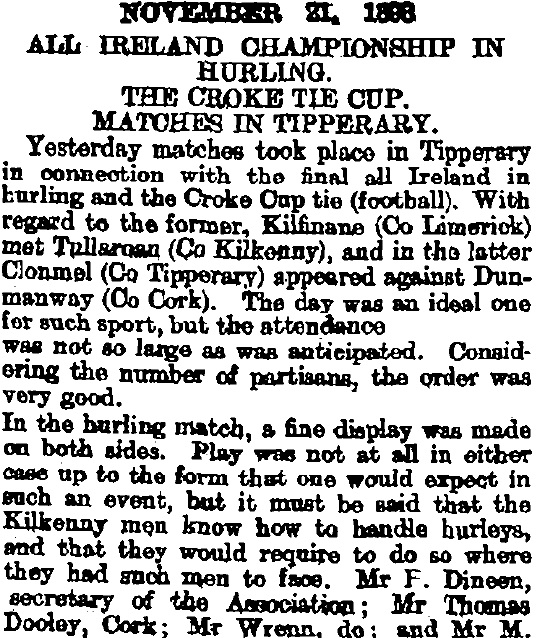 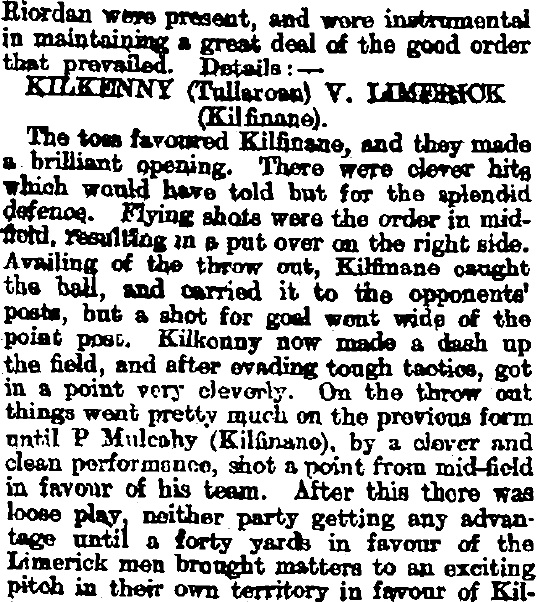 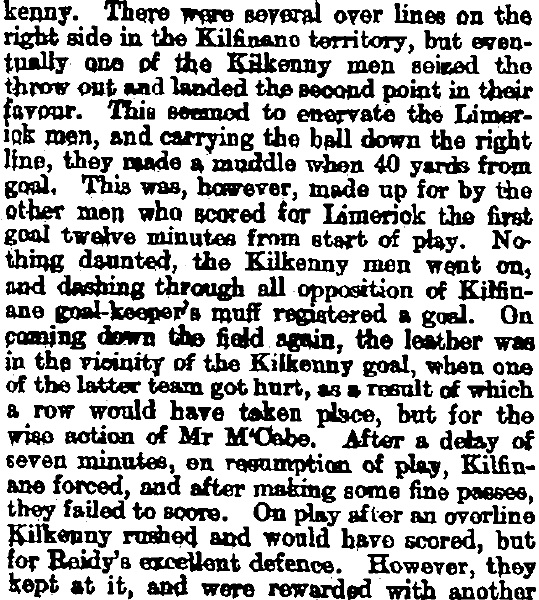 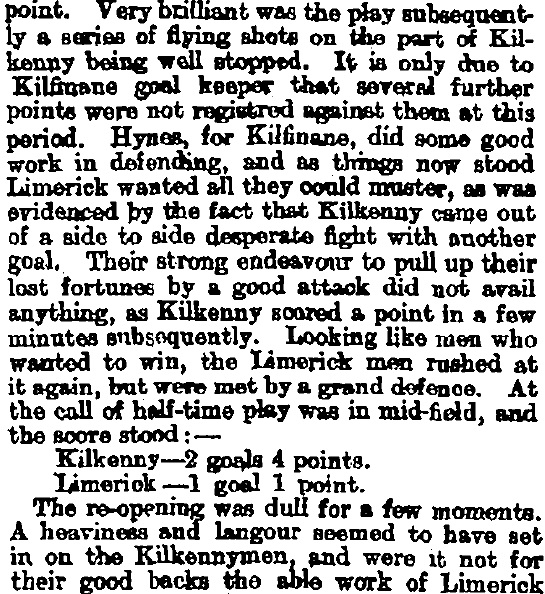 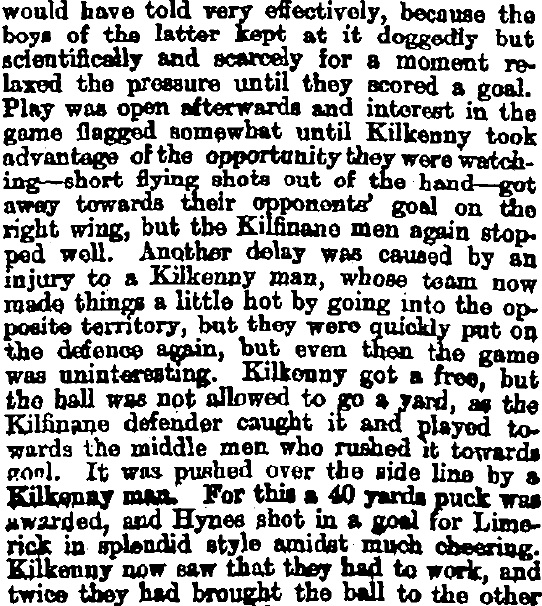 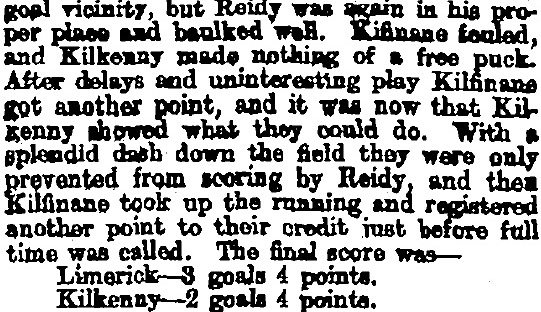 The oft-told story that Kilfinane, having played barefoot throughout the championship, were presented with boots for the occasion of the final, but threw them off before the resumption of play in the second half, is not related in this contemporary account. But it has passed into local legend to such an extent, that its veracity seems reliable.

17  Limerick hurlers carved themselves an indelible place in song and story on that damp November evening. 9 were drawn from Kilfinane, 4 from Cappamore, 2 from Ballingarry, 1 each from Croom and Caherline. “When the victorious team returned that night, with their sixty horse-drawn car loads of joyous spectators all bedecked with banners and flags, every window of every house in the town was ablaze with candles. Tar barrels illuminated the moat, the local brass band paraded the streets and celebrations continued through the night long…“

Although the position of manager/trainer had a much lower profile than it does today, club President John Downes and Treasurer Thomas P McCarthy are credited with the preparation of the team. Similarly, the concept of man-of-the-match was unknown, but a starring role for goalkeeper John Reidy can be inferred. 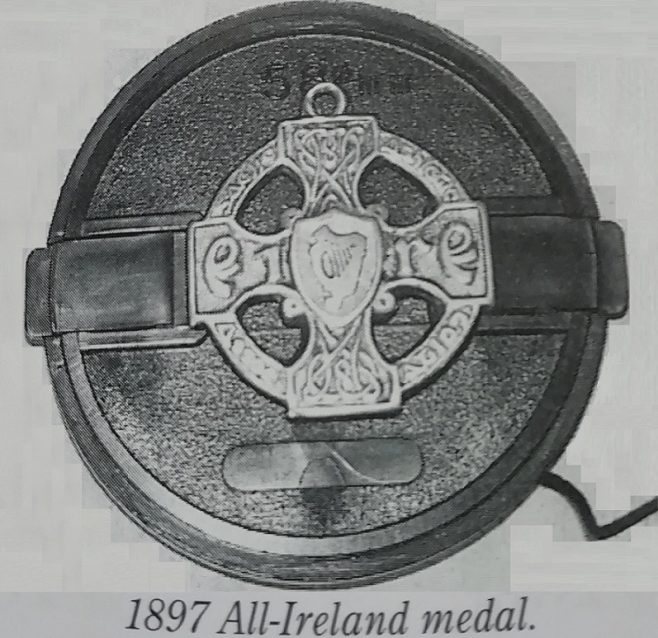 The above medal, possibly that of Michael Downes, is the only 1897 AI Senior Hurling medal whose current whereabouts is known. When plans were being drawn up for the 1997 Centenary commemoration, a request was made in order to establish if any of the golden relics could be unearthed, resulting in the rediscovery of the above solitary specimen.

A record does exist of a function held on the 26th of December 1898 at which medals for the County final victory over Cappamore were presented:

On Sunday the 4th of June 1899, at a meeting of the Central Council of the GAA in Cork City, presided over by Michael Deering, “the Secretary, in reply to the President, said the medals for the All Ireland Hurling Championship had been handed over to Kilfinane (Limerick)”.

Although the 1897 All-Ireland Hurling victory marked the pinnacle of Kilfinane Emmets’ achievements, it was not their only claim on greatness. At that time the Croke Cup, named for GAA Patron Archbishop Thomas Croke of Cashel (1824-1902), was of scarcely less importance as a sought-after national prize. The inaugural 1896 event was won by Tulla of Clare, and it was they as defending champions who faced Kilfinane in the opening round of the 1897 renewal, four weeks before the All-Ireland Final:

This paved the way for the provincial final against old rivals Blackrock, scheduled for the 12th of February 1899. The match however, did not take place.

After further wrangling, the re-arranged fixture did proceed on the 26th of March at a thronged Mallow, the two sides battling to a draw:

On this occasion, a superb photo of both sides was taken by Wilkie & Sons, Cork. Kilfinane on right: 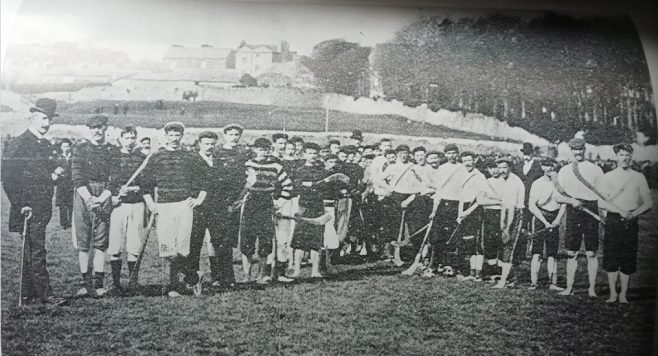 The tense, hard-fought encounter predictably generated another bout of  boardroom recriminations, but the replay was eventually fixed for Mallow on the 21st May 1899…. and was a classic:

Kilfinane found themselves on thin disciplinary ice at a meeting of Central Council on June 4th, and were not slow with a spirited rebuff, but the action on the field continued apace. Unlike the All-Ireland Championship, a national semi-final was required before the Croke Cup final position could be secured, and Galway were duly demolished at Tipperary Town on the 11th of June:

The decks were now cleared for a rematch against defeated All-Ireland finalists Tullaroan of Kilkenny and, on Sunday the 9th of July 1899 at Thurles, home of the GAA, Kilfinane once more proved their superiority as the finest hurling team in the land:

A portrait of Kilfinane’s stature in the hurling world as the century drew to a close is eloquently painted here: 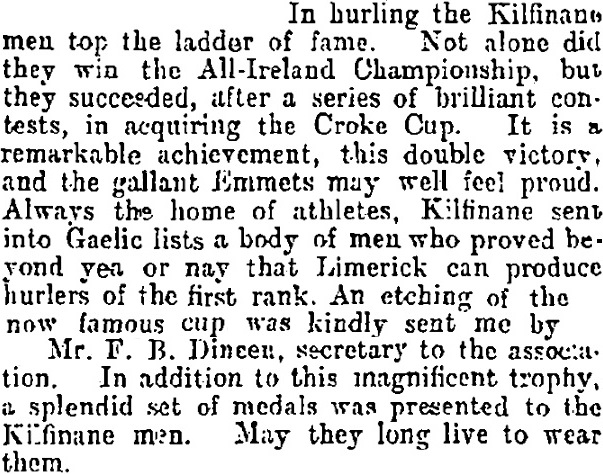 From contemporary accounts and subsequent researches, it is possible to glean a tolerably accurate listing of the players who participated in the 8 inter-county contests required to land the coveted All-Ireland/ Croke Cup double. It is as follows:

The position occupied by each player did not elicit a great deal of comment in the contemporary reports. Although each position was individually designated, the actual assignation of the player to his respective position seems to have operated as a flexible arrangement. Below is an illustration of how the All-Ireland final team may have lined out: 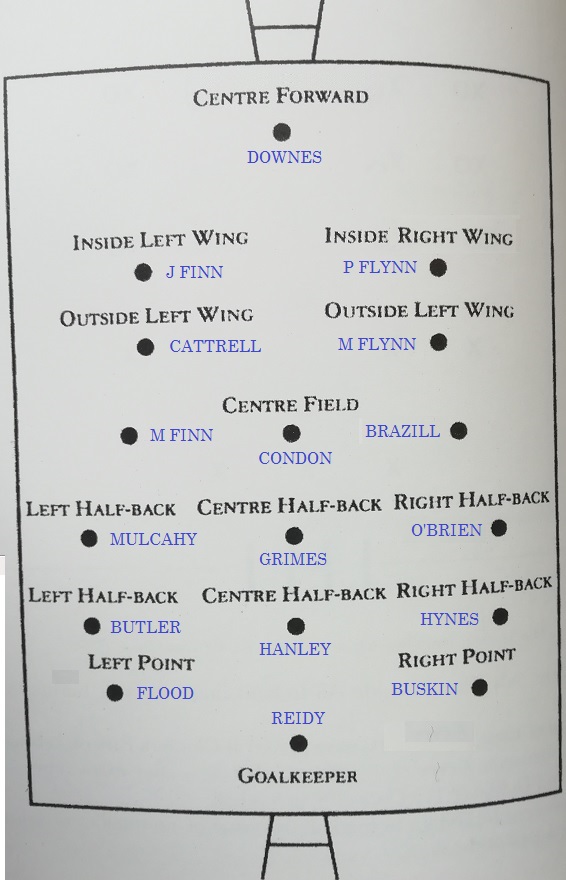 Limerick’s reign as All-Ireland champions ended inauspiciously at Tipperary Town on the 10th of September 1899 at the hands of Cork. It is interesting to note the 5 Kilfinane players selected by the County champions, Shamrocks; implying as it does the exalted status of this quintet – namely Hanley, Grimes, M(?) Finn and Brazill, with Maurice Flynn as substitute. The four Cappamore men were again selected, as were Flood and Buskin. The reality on the day of the Munster semi-final was very different however, as we are told “… the Limerick team was practically a scratch one, as some of the men selected did not turn up… Cork had to wait considerably over an hour on the field before the Limerick men consented to line up… it was found they were two men short… it took much persuasion for them to play with just the fifteen…” It is unknown if the Kilfinane stars were among the absentees, or for what reason Limerick did not take the field as selected.

The match degenerated into a brawl after half-time with Cork out of sight on the scoreboard, forcing the referee to call a halt. 25 police were required to prevent a riot. The ignominious consequence was that All-Ireland heroes Hynes and Mulcahy were reported to Central Council for foul conduct, with John Hynes appearing in court two weeks later on assault charges. The case was dismissed. Limerick would wait nearly 20 years for their next All-Ireland crown.

Kilfinane Emmets added one last chapter to an epic storyline by regaining the Limerick County title on the 22nd of July 1900. Having withdrawn from the 1898 championship to concentrate on inter-county commitments, the vastly experienced Emmets swept Loughgur aside to complete their trophy haul. Kilfinane have not reached another County Senior final in the 120 years since.

Kilfinane-selected Limerick were drawn against Moycarkey-led Tipperary in the 1899 Munster semi-final but records are difficult to come by. Tipperary then defeated Clare in the Munster Final at the Market’s Field in October 1900.

Thus the fabled Kilfinane epoch drew to a close… Grimes, the inspirational leader of men, leaving for the Welsh coal mines; the great Sean Og appearing in two further Finals with the London Exiles – his legacy so lustrous that 40 years later he would be selected in an all-time hurling XV – Pat Mulcahy earning Leinster medals with Dublin, stalwarts Flynn and Downes closing out their glittering careers, ace shot-stopper Reidy forced into early retirement, Condon making good across the ocean, Cattrell enduring to take the intermediate title as late as 1910. The prodigy, Tom ‘Goatee’ Brazill, would play for Limerick into the 20th century, as did Patrick Flynn. But never again would such soaring heights be ascended as were scaled in the glorious campaigns of 1897.

It was the end of an era.