Information on the Halpin family blacksmiths.

Occupations of Our Irish Ancestors: Blacksmith

On Valentine’s Day in 1887, in Kilfinane, Co. Limerick, Alice, twin sister of my great-grand-father John O’Regan, married the local blacksmith, Patrick “Paddy” Halpin, at St. Andrew’s Church. Since the couple’s families had lived and worked in the area for many generations (the O’Regans operating a cooperage in Ballyroe Lower and the Halpins a blacksmith’s forge in nearby High Bridge, Bosnetstown), the families most likely knew each other well.

In researching the O’Regan-Halpin connection, I was fortunate to rekindle the family relationship with several descendants of Alice and Paddy Halpin. They told me that in 1937, the Irish Folklore Commission, in collaboration with the Department of Education and the Irish National Teachers’ Organisation, initiated a program in which schoolchildren were encouraged to collect and document folklore and local history by interviewing their elders. As part of the project, thirteen-year-old Elizabeth “Lizzy” Halpin wrote an essay – “The Folklore of the Forge’ – about the Halpin family forge.

“My father is a blacksmith,” she wrote, “and he has a forge a mile from the town of Kilfinane. It was built about one hundred and fifty years ago by a man named George Wheeler Bennett who lived at the castle… My father’s people were blacksmiths for seven generations and all called by the same name, Patrick.”

In an era before the mass manufacture of household utensils and farm tools and when horses were the main means of transportation, a blacksmith’s forge was a staple of every rural Irish community. Residents depended on the blacksmith to make and repair the items that were indispensable for daily life, such as door and gate hinges, shovels, hoes, ploughs, bolts and nails, hammers, chisels, and the hoops used to secure barrels and churns. 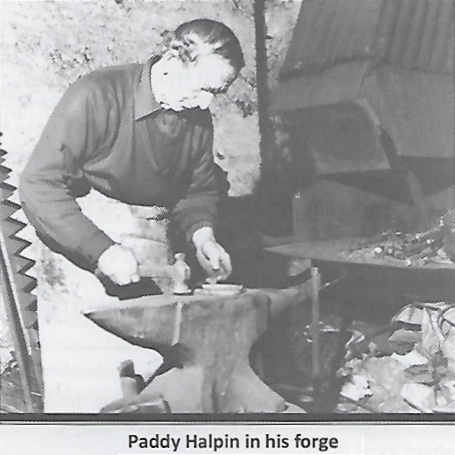 According to Lizzy Halpin, her family carried on “general smith work shoeing horses, banding wheels, making and repairing all kinds of farm implements.” In a dairy farming community, such as Kilfinane, horses were a mainstay, essential for transporting produce to the local creameries. Taking into account that there was no shortage of working horses that had to be re-shod or ploughs needing to be sharpened, the making of horseshoes and the sharpening and repairing of ploughs had to be a major part of the blacksmith’s daily routine. As with most occupations of our Irish ancestors, blacksmiths made all of these items strictly by hand and a trained eye, guided only by the years of training, experience, and skills they received after working side by side with their fathers and grandfathers.

In her article Lizzy noted that the tools used at the Halpin forge included a “bellows [to stoke the fire], anvil [to shape the object], vise [to hold the iron], sledge, heavy and light hammers [to flatten and shape the metal], pokers, dogs [tool used to hold objects in place], hot and cold sets [cutting tools].” Shaping iron by hand into the tools needed by the customers was no easy task. Holding the white hot iron with a pincer or tongs, the blacksmith would pound the metal into the proper shape using an anvil and hand hammer or a sledgehammer for larger pieces. A punching hole, usually at the rear of the anvil, was used to create the holes in the metal needed in the making of horseshoes and other implements. The furnace used to make the iron pliable had to produce constant heat, and to achieve this the blacksmith stoked the furnace with a hand- or foot-operated bellows. A trough of cool water was always nearby to cool down and strengthen the metal, a process known as hardening or tempering. Because the forge was such an important part of everyday life, it was often the social centre of the community. A visit to the blacksmith’s provided the local farmers and their families with the opportunity to meet and share local news.

The living were not the only ones visiting the forge. Lizzie Halpin wrote about the folklore, witnessed by her great-grandfather, that whenever a native of Kilfinane died abroad, a funeral cortege of four horses drawing a hearse passed by late at night and stopped for a few moments at the forge. Considering that this folklore specifically refers to the Halpin forge, it seems apparent that it was an important place in the life of the community.

The Halpin forge continued to operate until the late 1990s, when the ninth and last Paddy Halpin retired as a blacksmith.

Author’s note: More information about the Irish Folklore Commission can be found on its website, www.ucd.ie/lrishFolklore.

user submitted [I am gathering together information on the eight generations of Patrick Halpin who were blacksmiths at Kilfinane and Knocktoran in Knocklong I will be able to share this at a later stage.