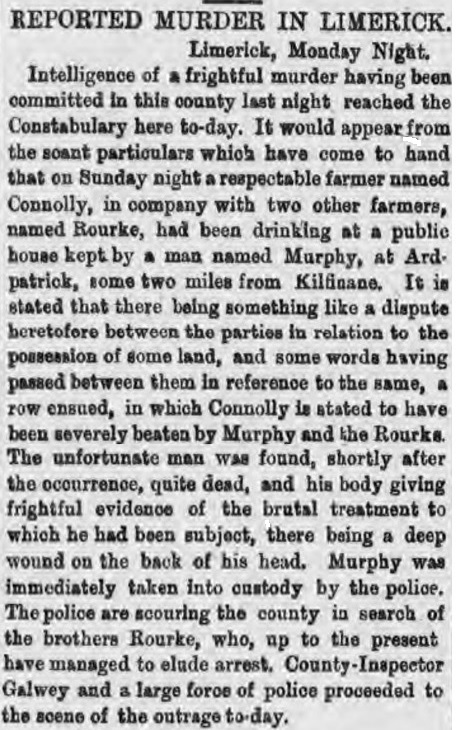 The deplorable occurrence, the report of which has startled the community, is of a different character from those which have stained other parts of the county of Limerick. Ardpatrick is a townland situated about midway from Kilmallock and Kilfinan [sic]. Thus it joins the apex of the angle comprised within the roads of the three places. The population of this district are well-known, not only for the prosperous condition they enjoy but also for their complete freedom from the spirit of factionism or anything of a party nature. The district about here is remarkably mountainous, nevertheless, the evidence of the greatest industry are to be seen in the highly cultivated aspect of the land, and the comfortable appearance of the peasantry of the district. That therefore an outrage committed in a remarkably peaceful part of the country should create unusual surprise is what might be rationally believed in, and therefore, the death of the poor young man Connolly, on Sunday night, occurring as it did so suddenly, has created a degree of interest in his neighbourhood, that has seldom been witnessed.

The deceased was a respectable young farmer residing at Mortalstown on the estate of a gentleman named Despatel (?), which is exactly midway situate between Ardpatrick cross and Kilfinan. On Sunday evening he went down to Ardpatrick to Murphy’s public house with some parties of the name of Rourke and Murphy where they were drinking together. When the time for closing arrived deceased, the group left, and what gives a suspicious character to the man’s death is the fact that the three parties were comparatively sober, they only having drank a quantity of porter while in Murphy’s house. Some sort of personal feud – not of a party nature – existed between the deceased and Rourke – arising it is said out of the purchase of cattle on one occasion. On their way towards Mortalstown a squabble took place, it is evident, between Rourke and deceased, during which recriminatory language took place between them – for they were heard by the gatekeeper’s wife at Sunvale lodge – Rourke referring to the affair about the cattle, and that he could do his work as well as anyone, and Connolly replying that no one belonging to him was ever charged with robbery, the latter remark having personal allusion to a member of Rourke’s family.

This led to a personal altercation, or fight between the parties, during which Connolly got the upper hand of Rourke, and the latter being unable to contend against him he resorted to the assistance of a knife, with which he inflicted a dreadful wound on the left side of the neck, causing severe hemorrhage, resulting in death a few minutes afterwards, according to the medical testimony adduced, the blood vessels in the region having been severed.

He was found lying dead that night by Mrs Bourke, wife of the gatekeeper at Sunvale lodge, the residence of Mr. Lowe, D.L. He was taken into the lodge, and Dr. Donovan, of the district, was called in to see him early yesterday morning, but he found life extinct. The report of the unfortunate occurrence created a considerable amount of excitement, and when the corpse was brought home to his mother’s residence at Mortalstown, her feelings could more easily be imagined than described, at finding the prop of her old age… the son she had nurtured at her bower in infancy being brought home to her a corpse. The police on hearing of the occurrence took active steps to find out who the guilty parties were, and Constable Thompson, shortly after receiving the report, arrested a young man named Michael Murphy, son of a farmer in the district, who was in deceased’s company on the night of the occurrence.

Sub-Inspector Lanyon and the constabulary of the district also made search for the young man Rourke, who had been in deceased’s company, and with whom he had been quarrelling, but he in the mean-time decamped and has not since been made amenable. On this afternoon, Dr. Murphy, coroner, and Dr. C. Cronin, attended at deceased’s residence to hold the inquest. Sub-Inspector Lanyon conducted the inquiry which was likewise attended by Mr. Robert R. Kennedy, R.M., Mr. Gallway, County Inspector – who left Limerick last evening on hearing of the outrage – Captain Lowe and Captain Scarlett, of Sunvale, and Dr. Donovan, Kilfinane.

There was an unusually large attendance of the farmers of the surrounding district for many miles, who came on their cars with their families, to express their sympathy with the mother and other relatives of the deceased – who was a most amiable young man, and much esteemed by his neighbours – and likewise to attend the funeral which took place at the close of the inquest, which commenced at two o’clock. The young man, Murphy was brought in in the custody of the Constabulary of Kilfinane.

John Casey was the first witness called. He deponed: I live in Ardpatrick; I recollect last Sunday evening; I was in Bridget Murphy’s public house at Ardpatrick; I saw deceased, Edmond Connolly there; Tom Rourke and Mike Murphy were within; they were drinking in the house; they drank porter; the three came in together at half past six o’clock in the evening; they were doing nothing but drinking; they remained in the house half an hour and went away together; the house was closed at seven; the deceased was in his usual health when leaving the house; they had no quarrelling while in the house.

Mrs. Bourke examined by Sub-Inspector Lanyon deposed: I live at Sunville Lodge; I recollect last Sunday evening; I saw the deceased man that evening; he was alive when I saw him; he was along with two other men, but I would recognize them; when I saw Connolly first he was passing the gate; I knew the three men afterwards who were there.
A Juror – How did you know them?
Witness – Michael Murphy and Thomas Rourke were with him. I have no doubt Ned Connolly (deceased) was walking with them at the time. All the words I understood were used by Thomas Rourke, who said “He did not care for any one so long as he did his own work.” The three men were then going down the hill towards Ardpatrick. I heard no quarrelling between them. They walked on and I went into the house.

County Inspector Gallway said the authorities were not yet prepared to fasten the guilt on anybody. All that could be shown was the time, place, and cause of death of the deceased. A magisterial inquiry would be independently held.

Coroner – Whether it is designedly or otherwise this witness is not throwing much light on the subject.
Examination continued – When I next saw deceased, he was lying on the ground about a few perches from my house. He appeared to me to be dead. I heard no dispute between deceased and the other men about cattle.
A juror here asked a question.
Mr. Bourke (witness’s husband) Spoke out – Don’t answer any question put by a humble man.
County Inspector Gallway ordered the removal of the person who thus interrupted the course of the proceedings.

Doctor Henry Donovan deposed – I saw the deceased, Edmond Connolly, on Monday, 11th inst. between 4 and 5 o’clock, a.m. I found a wound about an inch and a quarter long, extending from the angle of the lower jaw on the left side, upwards, inwards and backwards, and some bruises on the opposite side on the right of the forehead. I saw no other wound of violence on his body. I have since made a post-mortem examination. and found that the principal blood vessel in the left side of the neck has been divided. The wound extended (unclear) the spine and was about two inches deep, and I have no doubt that the cause of death was loss of blood consequent on the injuries received.

The Coroner then addressed a few observations to the jury, and said their duty was to find a verdict as to the true place and cause of death, and the guilty parties would be dealt with by the authorities. It was, however, satisfactory to remark that occurrences of the character they were assembled to investigate very seldom occurred in this county.

The jury then returned the following verdict: – “We find that the deceased Edmond Connolly died from hemorrhage, from an injury to the blood-vessels of the neck, inflicted by some person or persons unknown.” 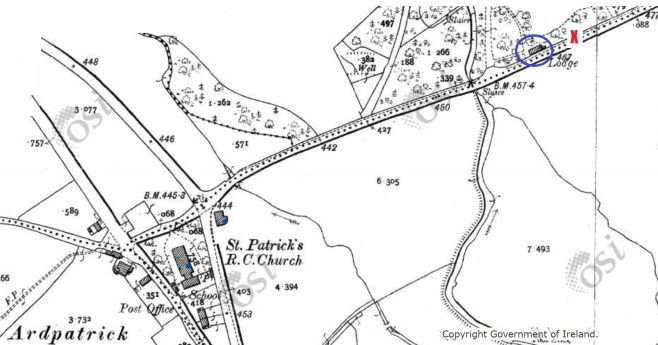 Above; map of district including post office ‘which was within a few yards of Murphy’s public house’, Sunvale gate lodge (circled) and X marking the most likely location where Edmond Connolly fell. 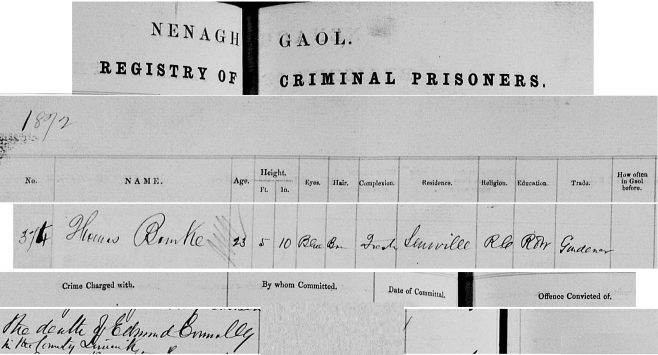 [Another man was remanded on bail in January 1873, for ‘harbouring and concealing the suspect’].

The trial of Thomas Rourke proceeded in late February 1873 – 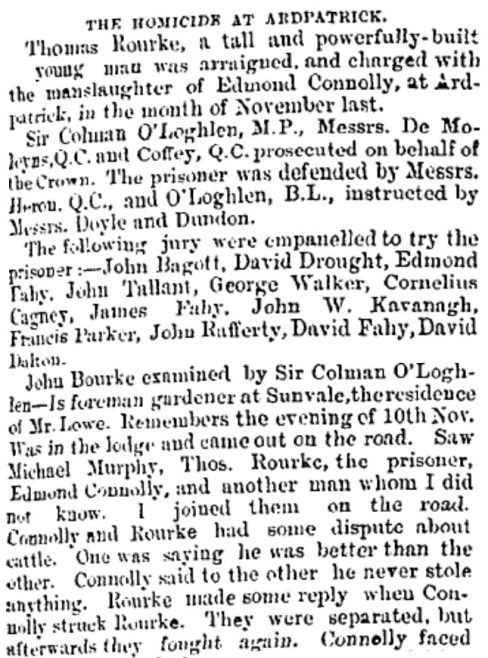 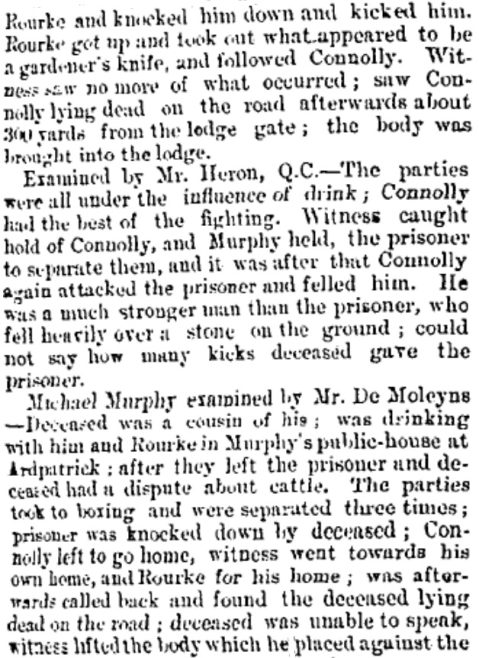 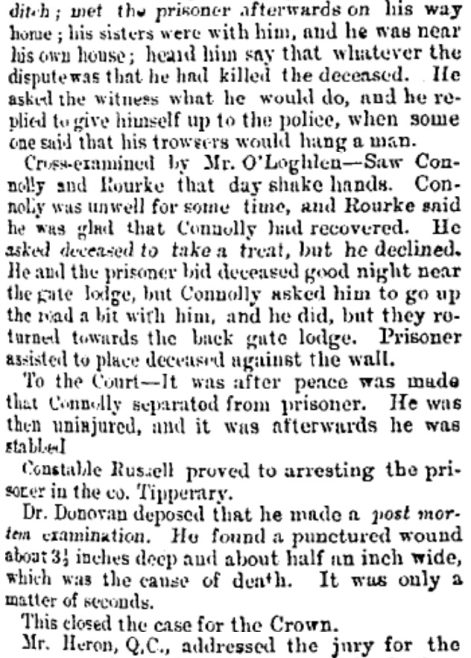 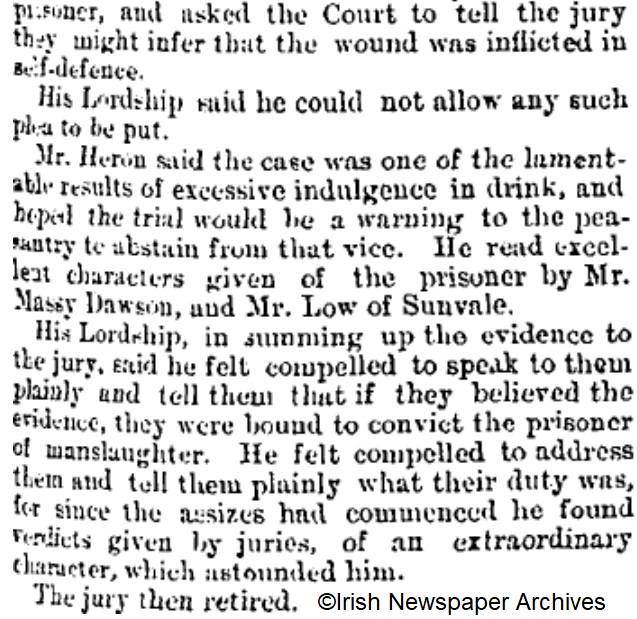 [*The above evidence states Edmond Connolly was found ‘300 yards’ from the gate lodge, conflicting with Mrs. Bourke’s testimony of ‘a few perches (c. 60 feet); possibly the above is an errata for ’30 yards’]. 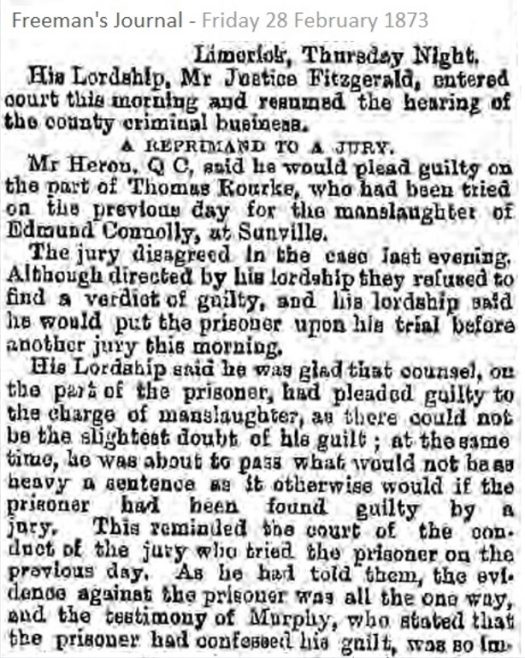 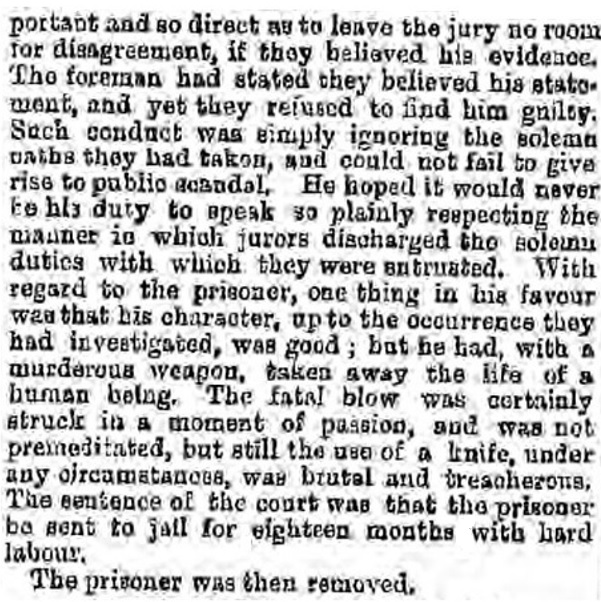 Thomas Rourke’s discharge on 7th June 1874 is preserved in the archives:

The document informs us that Thomas Rourke was not a native of Coshlea, but of Aherlow, Co Tipperary. The fact he returned to that area after the incident implies he still had close connections with the district.

Edmond Connolly was presumably buried on the Hill of Ardpatrick, on the 12th November 1872, in the Connolly plot – 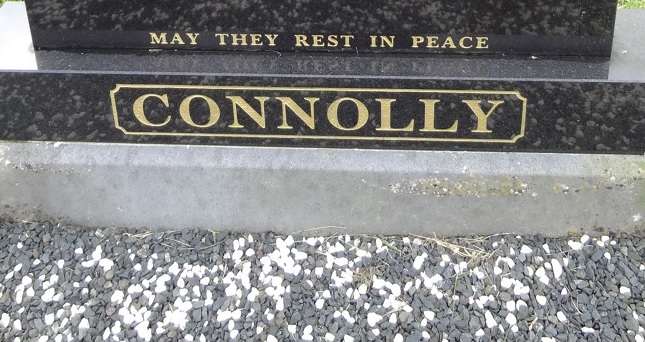 The death of Bridget Murphy, Ardpatrick, is recorded on the 27th June 1892. Although she is referred to as ‘farmer’s wife’, other circumstantial evidence favours the assumption that she was the owner of Murphy’s public house, and mentioned in the testimony of 1872.

Her son is listed as John, and John Murphy, shopkeeper, died in Ardpatrick on 21st November 1896.

His widow was Bridget (O’Connell) Murphy, recorded in 1901, and the above details tally with the information contained in the link previously referenced.

One final quirk is that, at the marriage of John Murphy and Bridget O’Connell in 1873…