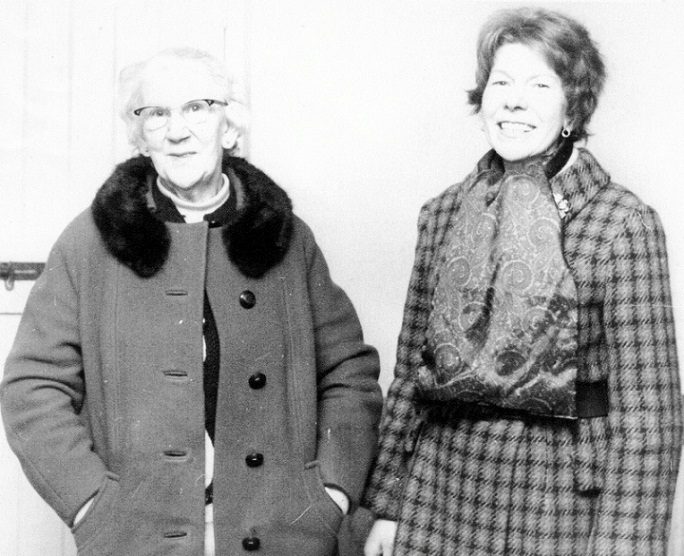 Several years ago, I began a journey to learn more about my Irish ancestors, and along the way I met three special women from Ballyhaught, Effin Parish, County Limerick. This meeting was not in person but rather through the warm letters and reflections of people who came in contact with my great-aunt Catherine and her daughters Mona and Ciss Fitzgibbon over the years; their friends, neighbours, and others who visited their public house at the crossroads in Ballyhaught known as Fitzgibbon’s Cross, or as some referred to it, “J-Cross”.

My family and I will be forever grateful to those who took the time and effort to respond to a letter I sent addressed to “Editor of the Local Newspaper”. It was through their letters that we learned a great deal about the Fitzgibbons’ lives and, most importantly, about how my great-aunt and her daughters touched the lives of those who met them.

Catherine O’Regan Fitzgibbon and her siblings Joseph, Ellen, and Mary were born in Brooklyn, the children of John O’Regan and Mary Grimes. In 1895, Mary Grimes O’Regan died while giving birth to a son named James. He only lived a few months.

My great-grandfather John O’Regan, being unable to properly care for his young children on his own, looked to his family in Kilfinane for help. His family worked as coopers, making butter boxes and churns for the local dairy farmers and creameries. According to the Land Valuation Office of Ireland and other records, the O’Regan family had a farm and were the local coopers in Kilfinane since at least the 1830s.

John O’Regan had ten siblings living in the Kilfinane area. One of them, his sister Bridget O’Regan Cudmore, and her husband John brought the motherless O’Regan children into their home on High Street in Kilfinane and cared for them. After John remarried, Joseph, Ellen, and Mary returned to their father in Brooklyn, sailing to New York aboard the ship Umbria in 1899.

Catherine, however, being very fond of her aunt Bridget and her life in Kilfinane, chose to remain in Ireland. Although the Cudmores did not have children of their own, Catherine was never at a loss for companionship. Her many aunts and uncles and their families all lived in the nearby communities.

Other than knowing that Catherine O’Regan attended the Faithful Companions of Jesus School in Bruff, much about her childhood years in Kilfinane still remains to be uncovered. Her story picks up with her marriage in 1915 to Jeremiah Fitzgibbon. Jerry, as he was known, was the nephew of Johnny Fitzgibbon who opened Johnny’s Pub in 1884 at J-Cross in Ballyhaught. As the years passed, Catherine and Jerry took over the operation of the uncle’s pub/grocery store, renaming it Jerry’s. When her husband died in 1947, Catherine renamed it Fitzgibbon’s. 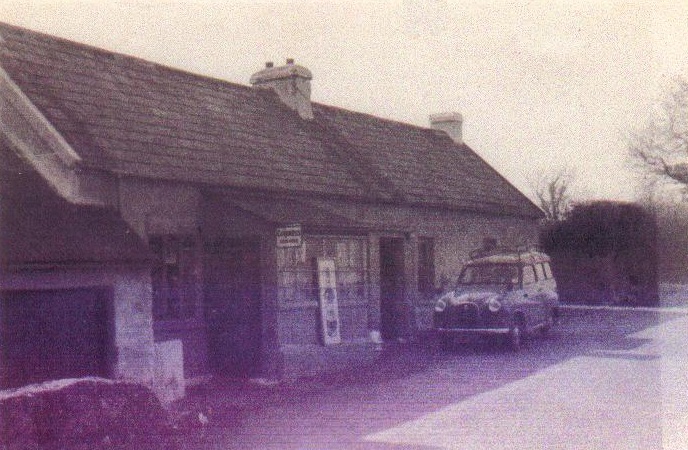 Catherine and Jerry Fitzgibbon had five children: Mona [Bridget Theresa], Ciss [Margaret Mary], Creina [Nora Patricia], Mammie [Mary Ellen], and John. As children, they spent their summer holidays visiting their aunt Nell (Ellen Fitzgibbon) Fox, who had a farm in Ballyshane. Seventy years later one of their childhood friends fondly remembered first meeting Ciss and Mona and playing with them during their visits to the farm.

One lifelong friend and neighbour recalls his father telling the story of “being sent off in the horse and trap to bring the midwife” to Catherine’s home the night in 1923 that Ciss was born.

Many of the letters I received shared memories of visits to Fitzgibbon’s over the years. During the day it served as a shop and in the evening, it was a pub. Prior to electricity being made available to the Kilfinane area, the shop maintained a small tank of paraffin oil to service the community’s oil lamps and stoves.

Visits to the shop were not just shopping trips but social events as well. With Catherine, Ciss, and Mona, one could always discuss the comings and goings of life, its joys and sorrows. They always made sure to take time to have a chat with their customers and to make them feel welcome.

Since Ciss and Mona had no children of their own, it was said they welcomed visits from the neighbourhood children, for it was the youngsters who kept them young at heart. Some recalled going to the shop as children and being given a packet of penny sweets or a bar of chocolate “on the house”. One wrote that when she was a child, she and her sister would walk to Fitzgibbon’s for treats and remembered that Ciss and Mona always took the time to chat with them. She recalled waiting patiently at her uncle’s cottage down the road from the shop for Ciss and Mona’s dog Tina to make her appearance outside the shop. That was the sign that the shop was open for the day.

At night, their neighbours would not only stop at the pub for a “drop of whiskey or a few pints” but also to chat with friends and neighbors and share life’s experiences with Catherine, Ciss, and Mona. In addition to its proprietors being able to pour a perfect pint, the pub was well known for its musical sessions, a tradition that still lives on at the establishment, now called The Idle Hour.

In addition to running Fitzgibbon’s, Catherine and her daughters were also involved in the activities of Effin Parish, often participating in its feasts and festivals. Ciss was a member of the Muintir Na Tíre (“People of the Land or Countryside”) Guild that promoted the building of the Canon Hayes Memorial Hall in Effin in the 1950s. From its founding in 1931, the guild’s main purpose was to improve the social, cultural, economic, and environmental status of the people.

Catherine is remembered as a “very well-kept lady”, who always turned herself out impeccably and kept her dignity and pride to the last. Her death in 1978 was a great loss to the community, as well as to her loving family. Her daughters shared her love of life and her warm, friendly demeanour.

Ciss and Mona have been described as “two of life’s most honest, lovely and gentle people”. They insisted on adding up all of their customers’ purchases by hand, even after they had acquired an electronic cash register, so that they could be sure their customers were charged correctly.

Ciss was described as a graceful, soft-spoken woman with a whimsical smile and her grey hair always tied back in a bun. Her sister Mona, a trained beautician, ran a business in Kilfinane and nearby Charleville. She also worked as a beautician in London for a while, but in the 1960s returned to help her mother and sister operate the pub. There she remained until her death in 1997. Described as a fair-haired lady with an ever-smiling face, she was well-liked by all who visited Fitzgibbon’s. One longtime neighbour recalls her cousin being in love with Mona, and she remembers carrying his love notes to Mona.

According to one neighbour, Ciss’s death in 1999 marked the end of an era. “The likes of these three special women will not pass by us again”. Another remarked after Ciss died, “Thus ended the lives and times of the Jerry’s [i.e., Fitzgibbon’s], a gentle, well respected and kindly remembered family – may they all rest in peace”.

While my family and I regret never meeting Catherine, Ciss, and Mona in person, we did get to visit the Fitzgibbon family gravesite at Kilquane Cemetery in Effin Parish. There we thanked each of these special women for bringing so much joy to those who had the privilege of knowing them.