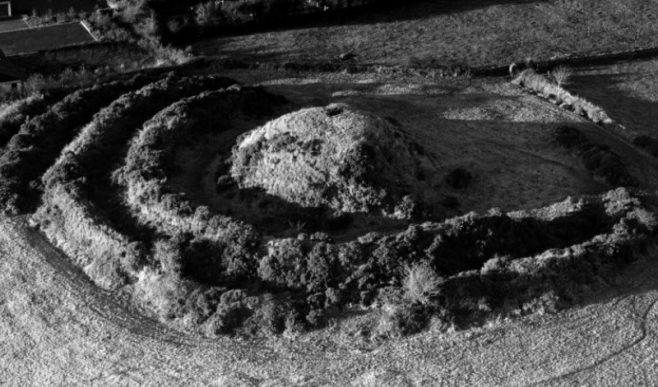 Kilfinane Motte is an historically significant earthwork located at 56.36N 8.47W, and listed at the National Monuments Service as LI056-024—-.

The following is a compilation of published sources which provide physical descriptions of the Motte, in addition to theories concerning its origin and purpose:

1] The History, Topography and Antiquities, of the County and City of Limerick – Rev Patrick Fitzgerald, John James McGregor (1827)

The inaccuracies in this account have been noted by Westropp (below). It has been persuasively suggested by James O’Brien, Kilfinane, that the details actually refer to Mortalstown ringfort, the latter being a closer match for the given dimensions.

However, in the same work, under the heading Limerick County, Lewis interestingly does briefly mention:

this would appear to be the first usage of the word ‘Moat’ in the literature. 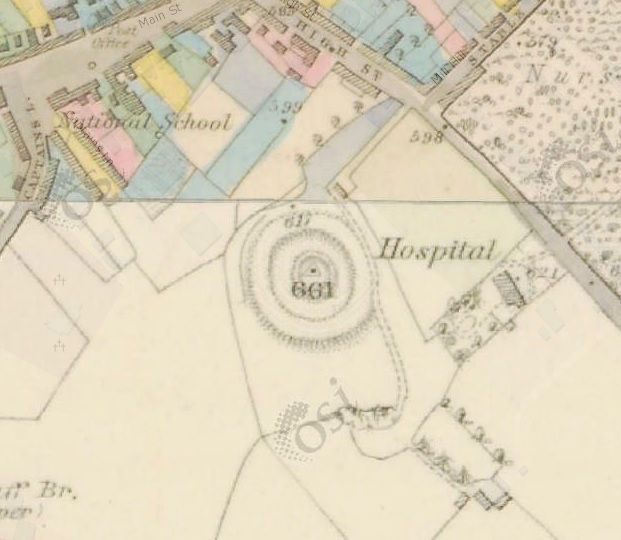 This is the first and only reference suggesting that a trigonometrical station was located on the Moat. 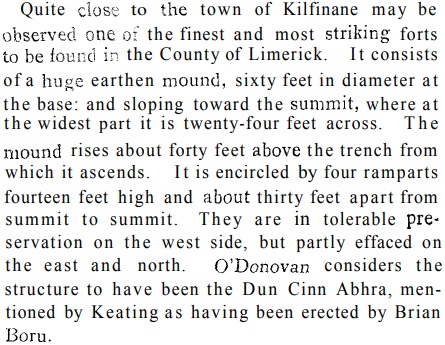 As we saw in entry 4], O’Donovan was uncertain of the connection between the Motte and Dun Cinn Abhra 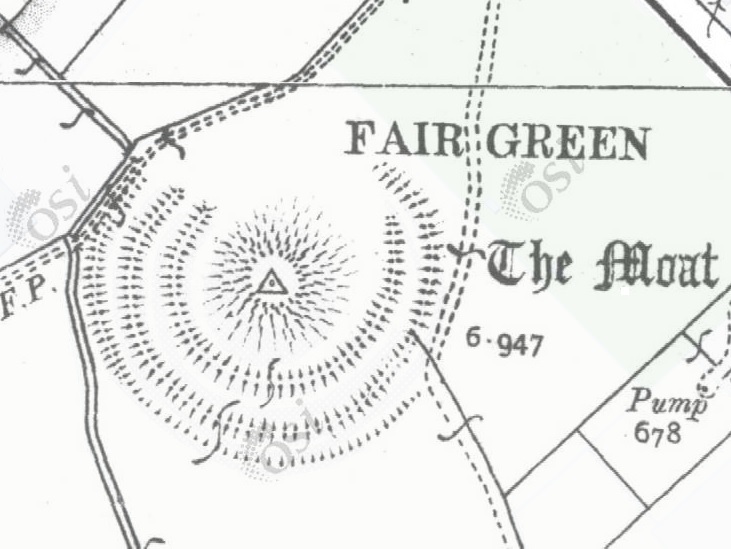 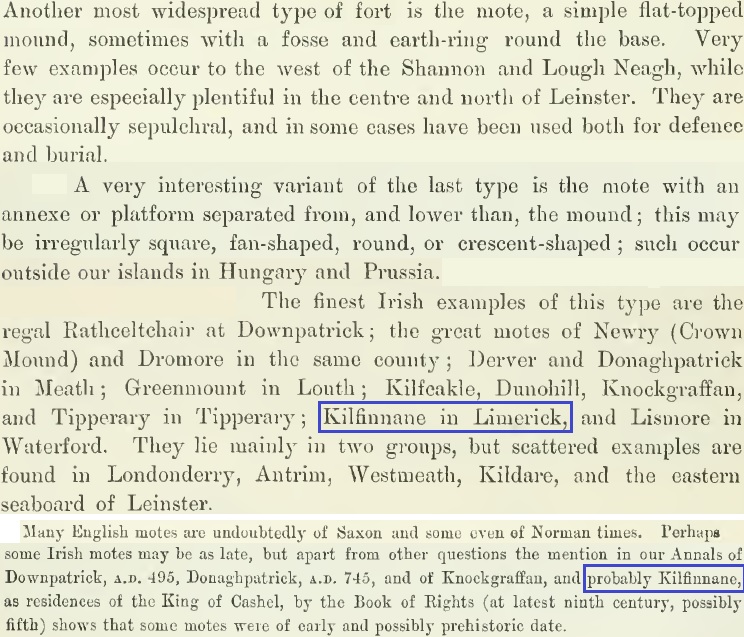 {Note: in entry 11] below, the phrase ‘there is no trace of an annexe or bailey’ is used} 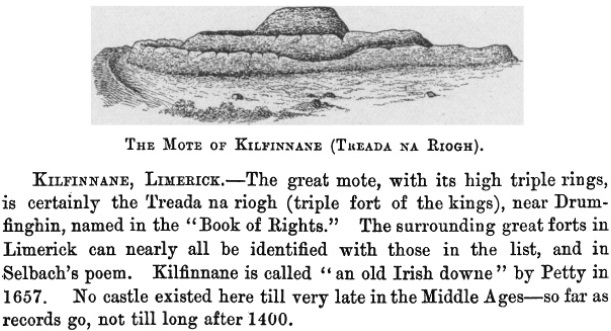 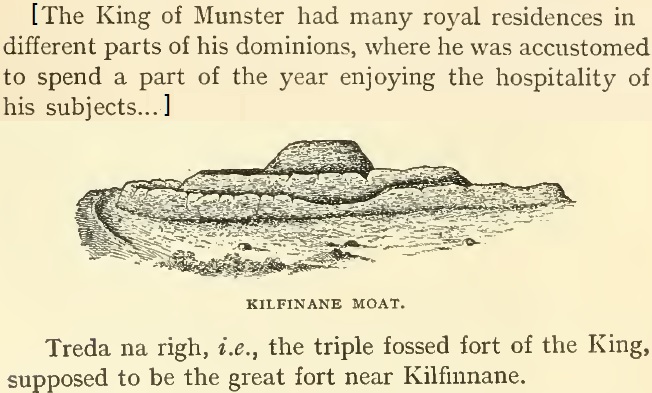 Certainly the most authoritative and detailed account of the Motte and its surroundings appears later in this same work. Excerpts from the mnemonic poem of St Benean are included, which constitute the first presumed allusion to Kilfinane Motte. Additionally,  extracts with relevance to the broader Kilfinane area from the Book of Fermoy, the Book of Rights and the Dindshenchas also feature. Westropp proceeds as follows:

“The name Kilfinnan is explained in the “Book of Fermoy”. It tells how, on Samhain night, Fingin mac Luchta, king of Munster, was at Drum Fingin. A fairy, Bacht, from Sith Cliath (Cnoc Aine Cliach, a mound of the Tuatha De Danann) came and told him of the wonders on the night when Conn Cead Cathach was born. From its connexion with the Sidh of Cliu, Kilfinan and Dromfinghin are evidently intended.

Somewhere near it was the spot where St. Patrick sat on “the three tulachs,” to watch the hunting of the mighty stags, roes, and boars at Osmetal Hill. People (as at Croaghateeaun, Co. Clare) feared to sit there because of the Tuatha De. Three glens met below Cenn Febrat of Sliabh riach, at a lake, Loch bo (evidently the marshy ground below Kilfinnan where the glens abut); the three mounds were probably those of Cush. To the east of the lake was Fininis, to the west Cnoc na haeire; to Patrick’s left was a fort on a mountain (Mortellstown), which he passed later going to Finntulach or Ardpatrick. The topography is most exact.

The Dind Shenchas of Cend Febrat says there was a “branch” of druids of the Tuatha De Danann established on that mountain. This is an important statement, as it possibly accounts for the unusual mass of legend preserved there from the third to the early fifth century, none seeming later than the reign of Eanna Airigthech, circa a.d. 410.

No legends attach to the Kilfinnan fort; it very possibly was never the residence of the Kings of the Dal Cais, and owes its shadow of “royalty” to a claim never enforced. In the well-known list of royal forts in the Book of Rights we have embodied a poem attributed to St. Benean in the fifth century, but far more probably of the period nearly five centuries later when the claims of the Kings of Cashel became prominent, but before the Kings of the Dal Cais were making their revolutionary claims to the Kingship of Cashel. In this venerable mnemonic poem we read of Dun Eochair Maighe, at Bruree, and “Drumfinghin of the wood, with it Treada na riogh” the triple-mounded fort of the Kings. This is unmistakably Kilfinnan.

The early English records call it Keilfinny and Keilfinane, and imply an earlier form, Coill finghin, Finghin’s wood (not cil or “church”); name-groups are not uncommon with the same terminal (as we saw at Sliabh and Dun Claire), so there may have been a Drum-, Coill-, and Cil Finghin here. The epithet “of the wood” is most appropriate; the place was hemmed in by forests, even after 1655. The barely penetrable oakwood in the Mesca Ulad between it and Knockainey, the “Great wood” of Coill more, Killmore or Killcuaige, Coillcuaige, Kilquoige, and Kilcruaig lay near it in 1657. Cloghnotfoy, or Castle Oliver, and Ballyurigane, near it, were at that time “well supplied with fireing and other necessary boates (bordes?) from the woods which those Mountaines afford.

The Civil Survey, 1655-7, mentions there “a castle with an iron grate thereunto, 50 tatch houses and cabins, a grist mill, a tucking mill, a millseate, Court Leet and Court Baron, a faire twice a yeare, and a market once a week.” The Down Survey adds, ” It is accommodated with good trouts and eeles by ye River Garath…  it hath also the convenience of a markett at Kilfinane, where is a good castle, and the walls of a church, and an Irish Downe.” The last word, having an important bearing, has unfortunately been touched by a pen-stroke, in order that it may be taken as “town.” Evidently the English copyist hesitated over the unfamiliar word Downe in his exemplar, and decided to render it “town.”

At this point Westropp notes the contributions of McGregor, Lewis, Windele and O’Donovan (above).

He continues: “Nothing is implied by usage of the term “mote” in Co. Limerick, Clare, and elsewhere ; it is used for any sort of fort, high or low, earth or stone; so in France the equivalent butte is used as loosely, and, despite all assertion to the contrary, there is no special height or form of fort implied by the name. I have never heard it used by the peasantry for the high mote of Shanid; I have heard a modern heap in the corner of a field called “a small mote,” and “mote” is used for fences, stone-forts, and low ring-forts.

The mote is 34 feet 6 inches high. It is 39 feet across the summit, nearly 50 feet, if we include the ledge ; but the edges are broken by cattle. The fosses and mounds are regular. The outer ones at the south-east are 18 feet across, the inner fosse 22 feet: all are levelled to the north-east. The rings vary where best preserved from 14 feet to nearly 17 feet high, rarely under 12 feet; they are 8 feet to 10 feet wide on top, and 15 feet to 20 feet below, the sides very steep and in parts furzy. The outer fosse is wet to the north-west; a small brook runs along that and the west side.

The mote has a core of stones under the thick clay cover; it was dug into many years ago, near the fair green to the north west, but the hole is now closed up. The field to the south is level on the ridge, but there is no trace of an annexe or baily. Without excavation and full weighing of the results it were foolish and idle to lay down any hard and “final” theory as to the origin of such an earthwork {emphasis added}. It may have been a burial mound, but the great fosses and rings tell against the view; or a residential fort, or feudal castle, but the small storm-swept summit, barely 41 feet across, is too small. The “Book of Rights,” circa a.d. 900, regards it as a fort.

I venture to suggest that it was connected with some ceremonial; oh that Mac Raith had not confined his lay to Cenn Febrat! The fair-green at its foot, the fair at least older, than 1655, may be the representative of an early oenach. The connexion of the oenach with the sidh mound is common. We know nothing of any inauguration place of the southern Dal Cais; it may have been at Oenach Culi; if not, do we find it at Kilfinnan? The northern Dal Cais, as all know, inaugurated their princes at Magh Adhair, near Quin. There a flat-topped mound, like one of the Sliabh riach motes, with a large fosse and outer ring, 28 feet high, 6 feet lower than Kilfinnan, was used in the ceremonial; but the platform was far larger, and the evidence for it having been a residential fort on occasion is strong, as it was “besieged” and taken in A.D. 887.

The more one studies the Irish high motes, the more certain it becomes that no theory can be based on their plan and shape; their resemblance to the great Hausbergs of central Europe of remote date, to the supposed “feudal motes” in France, now proved to be Gaulish and pre-Roman, and to the great temple mounds of the valleys of the Ohio and Mississippi, is shirked or put aside by the exponents of the exclusive theory of feudal origin. Whether, therefore, Kilfinnan Mote was a sidh or a residential fort I shall not decide. The Irish certainly erected residential mounds, like Duma Selga, of which we are told “Duma Selga, where the sons of Muredach used to dwell, now they are gone, the King-mound (rig-duma) remains.” I can readily accept the view, though unrecorded, that the Norman colonists may have crowned Kilfinnan Mote with a very small bretasche (earthwork) to command the pass into Fermoy, but see no reason to doubt its earlier origin, for whatever purpose it was at first designed”. 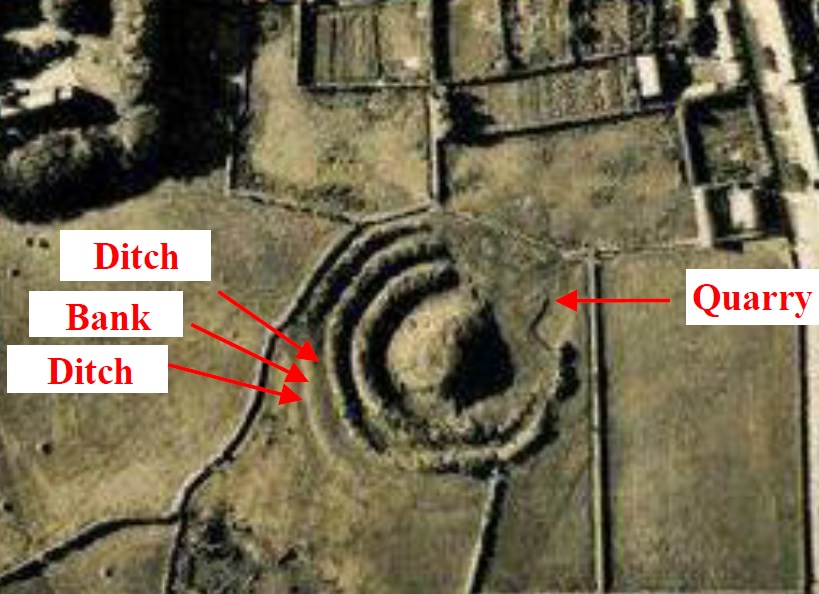 “…the hill fort in Kilfinnane is a splendid example surrounded by three concentric banks and fosses and it has been suggested that it is a site named in the Book of Rights, which is a pre-Norman compilation.” (p.21). Aerial photo is included (possibly that above). 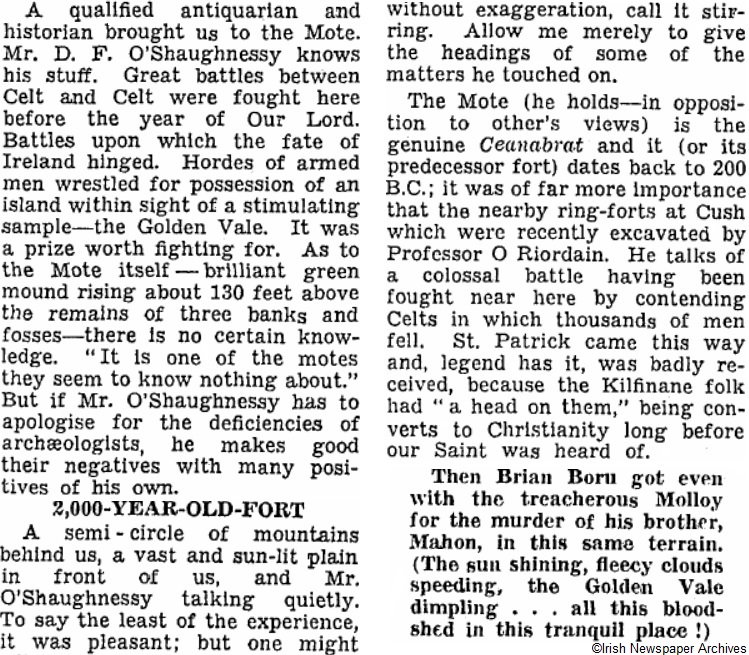 {An eyewitness repetition of the 1837 claim to ‘a 130 feet mound’ in this article seems difficult to explain}. 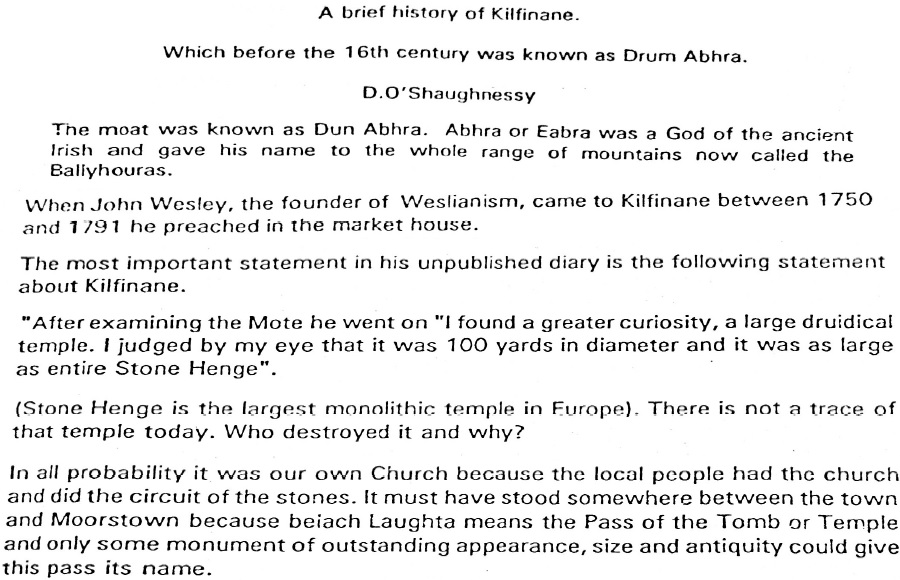 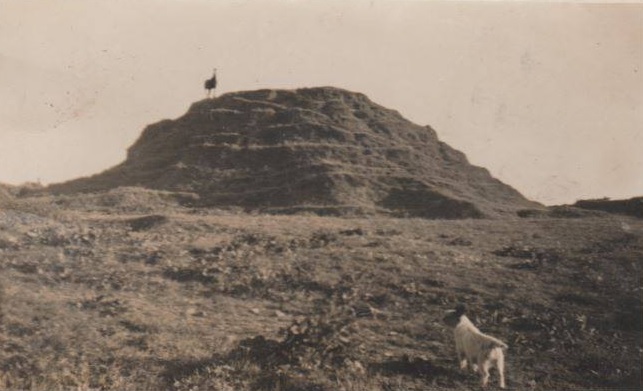 17] Articles in the Lough Gur and District Journal (1996), and the Kilfinane Coshlea Historical Journal (2002) are identical to that in entry 12] 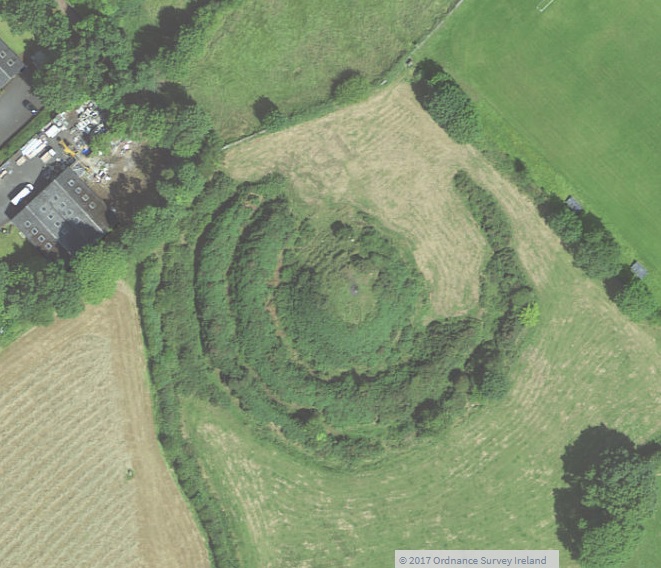 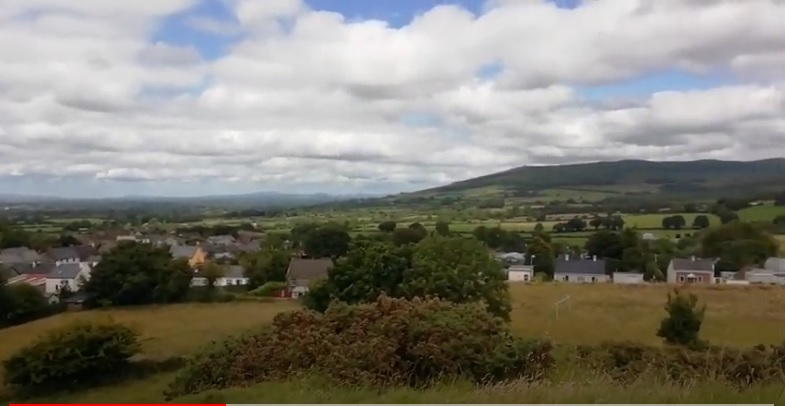