Soon after its foundation, the Kilfinane/Coshlea Historical Society adopted the Kilfinane Abbey Brooch as its logo. The history and importance of that unique treasure is best told by Raghnall O’Floinn, of the Irish Antiquities Division, National Museum of Ireland, whose article is reproduced here with permission (Archaeology Ireland 1993) –

“A SMALL GOLD BROOCH was purchased by the National Museum of Ireland at an auction at Christie’s of London in December 1992. It was described as formerly being in the collection of a Mr. Chape of Le Mans, France and was accompanied by an old label bearing the legend ‘Early British – Found at Kilfinan Abbey Co. Limerick’.

At the time of its purchase there was some uncertainty as to its authenticity, as no comparable object is known, but it was decided to acquire the object nevertheless on the basis that it was unlikely a fake and in the hope that something would be discovered of its early history. It measures just under 5 cm in length and weighs approximately 9 grams. The pinhead and penannular ring are decorated with stamped circles. 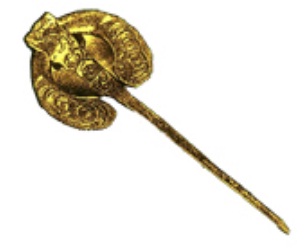 Some months after its purchase Professor Peter Woodman of University College Cork gave the National Museum copies of some of the scale catalogues of the Reverend Dr. Neligan, rector of St. Mary’s Shandon, Cork, a noted nineteenth century collector of coins and antiquities.

In one of these, an auction held at Sotheby’s of London on 5th April 1852, under lot 92, is listed: ‘A curious Gold Brooch, found at Kilfinan Abbey, County of Limerick, and another found in Kildare’. The Kilfinane brooch was purchased by a London dealer, William Chaffers, who was based in Bond Street, for £11.5s., the highest price paid for a lot that day. It has not yet been possible to trace its history between then and its appearance in the Chape collection in France.

Its Irish provenance is thus secure – it is said to have been found at Kilfinane ‘Abbey’. There is no abbey at Kilfinane but the brooch may have been found when the present Catholic Church was built on the site of an older church in 1835*. Its crude ornament consisting of stamped rings is reminiscent of the decoration on Viking-style silver jewellery, and it is therefore likely to date from the 9th century AD.

It is a significant find in two respects. As an old find its history can be traced from the mid-19th century, passing through the hands of a number of collectors and finally ending up in France. However its primary importance is that it is made of gold and this makes it a very rare piece. It is only the second pre-12th century gold brooch from Ireland – the other being the so-called ‘Dalriade Brooch’ from Loughan, Co. Derry. All other brooches of this type are of silver or bronze.

Its purchase by the National History Museum of Ireland is part of the continuing policy to repatriate as much as possible of our portable heritage. The brooch is now on view in the Treasury in the Kildare Street building of the museum. The fate of the other items in Lot 92 in the 1852 auction, a gold brooch found in Kildare, sold for £1.16s to the London dealer H.Q. Cureton, is unknown.”

*This actually refers to the ‘Old Church’ which was built in 1835 at a cost of £1,000 by Fr. Sheehy, who died on October 24th 1844 at the age of 95. The former National school was subsequently  built on that site. The present church of St. Andrew was built by Fr. Patrick Lee, who was parish priest from 1877 until his death in 1892. The foundation stone bears the date 27th July 1878. Another theory suggests that, since there is no abbey in Kilfinane, the brooch may have been found at ‘Abbey’ (i.e. Abbeyballinagoul) near Ballyorgan.