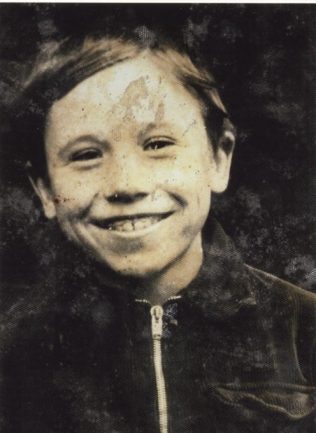 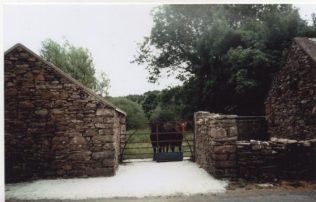 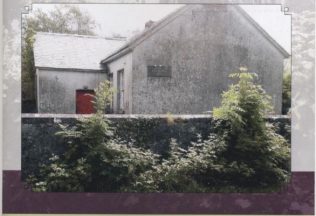 I went to school in Prizon in the 1950’s. At the start of that decade electricity and phones had not yet arrived in the area and the majority of homes did not have running water. Water for drinking, cooking and washing was drawn from spring wells, lighting came from paraffin lamps or in some cases tilly lamps using methylated spirits. Most of the heating was from turf fires in open fireplaces. These fires were also used for cooking. There was no television but some had radios powered by two batteries, dry and wet. The wet battery had to be charged from time to time at a cost of one shilling. Many of the houses were stone built, had flagged floors, thatched roofs and whitewashed walls.

Repairs and maintenance to thatched houses and farm buildings was an ongoing necessity to protect against winter rain, snow and storms. Household and farm tools and equipment were discarded only when no further repair was possible. Manufacture and repair of tinware such as saucepans, mugs and buckets, as well as chimney cleaning and other odd jobs, was carried out by travellers. Clothes were well cared for and made to last a long time by repairing and patching with needle and thread. Some lucky families received parcels of clothing from relatives abroad.

Most households had a small holding of land on which they kept a cow or two and a few other cattle, perhaps a donkey and a horse and maybe some pigs or sheep. Also some fowl, mostly hens. Potatoes and other vegetables grown on the farm were a big part of the diet together with home baked bread and home produced “country” butter and eggs. Other than fresh meat and flour, to a great extent many households were self sufficient food wise.

There were very few cars or tractors and very little machinery and most farm work was done by hand or with horses and donkeys. Setting, harvesting and storing potatoes and other vegetables for home consumption and oats and hay for feeding livestock were very labour intensive activities. In addition, turf for fuel had to be cut, saved, brought home and stacked securely. Also, cows had to be milked by hand twice a day and butter was made at home by churning. There was always plenty to do in these busy households and schoolchildren played a significant part in getting the work done. Going to school to get a basic education was regarded as fairly important but getting the farm work done was often given priority. If I remember correctly, 10 days absence were allowed each summer for doing the farm work. This I think indicates some official recognition of the importance of the agricultural work done by schoolchildren.

I was happy enough to go to school but if an excuse not to go arose, I usually availed of it. Getting to school was very different then. Nowadays, children are brought to and fro by car or bus. Back then we walked, sometimes taking short cuts across fields – could they be termed educational “field trips”? Along the way we partook of blackberries, nuts, sloes and anything edible to be found. In summer, many of us went without any footwear. On the unpaved roads this could sometimes result in painfully bruised toes. With experience we soon learned to avoid the bruising and enjoyed the good feeling of direct contact with the earth and the freedom experienced in going barefoot.

On one or two occasions, though we set out for school we didn’t get there. These were the times when we “schemed”. It usually happened in an unplanned way. We would be just dawdling along, it would get very late and then one of the “big”, older children would suggest scheming. We’d hide in a field until we thought it was time to go home. As none of us had a watch, we had to guess the correct time. On at least one occasion I arrived home much earlier than usual. My mother quickly realised what had happened but she didn’t make a fuss about it. When most of the pupils from a particular area were absent on the same day, the teachers would have a good idea they had schemed. As far as I can remember, parents and teachers were sensible and didn’t make a big deal of it. Very likely some of them had schemed in their own schooldays.

My memory of the school is the entrance hall being cold and darkish while the classrooms were bright and airy and fairly warm most of the time. The turf for the school fires was supplied by the families of pupils. I remember the quite pleasant aroma of the classrooms. It came from a mixture that included turf smoke, chalk, ink, sunlight soap, probably some kind of polish and various other substances.

At playtime we engaged in a variety of activities that included football, running, long jump, high jump etc.. Usually we didn’t have a proper football, it was made up from rags etc. tied as best we could into the shape of a ball. The goals were marked by jackets or pullovers.

There were regular visits by the school attendance officer whose function was to ensure each pupil had a satisfactory level of attendance. The school was also visited frequently by the parish clergy who were responsible for school management and who also examined our knowledge of bible and catechism. Their visits became more frequent at first confession, communion and confirmation times. My memory of most clergy at that time is that they took their vocations very seriously, were well intentioned and sought to do good. As we now know, in some parishes there were individual religious who abused their positions of power and caused great pain and hurt. Generally there was an expectation of unquestioning obedience, conformity and compliance with strict rules. I think a gentler, more compassionate attitude with a greater willingness to listen and understand, would have been better.

I remember members of a religious order coming to the school seeking suitable recruits and I was called out to the hall where they spoke to me about joining. Later on I received literature in the post about the religious life. I didn’t follow it up.

Another memory of my schooldays is when a number of us participated in a concert/show in the then Maple Hall in Balla. We were dressed as sailors and sang some sea shanties of which I now remember only the following:

“We are sailors bold and free,

Just returning from the sea,

Will you marry me.”

Though I sang my heart out that night, no-one responded to my proposal then nor indeed has anyone since! Maybe I should take singing lessons?

I know there are various sincerely held opinions on the quality and style of the teaching down the years. During my time there I was taught by three different teachers and thankfully I had no problem with any of them. They operated within the system that existed then and in accordance with the guidelines and budget laid down by the Department of Education and the school management. It was only later on I came to fully appreciate the work done by the teachers.

The School of Life

Of course, school was only part of our education. The experiences gained in working at home and on the land for ourselves and neighbours, together with the pastimes and games we played, helped us develop some self-reliance, self-belief, and a capacity to persevere and solve problems. Great credit is due to parents who gave us freedom to have fun exploring, enquiring and learning without putting any pressure on us.

In the 1950s money and material possessions were often in short supply but there was no shortage of spirit or imagination or creativity. Despite all the poverty and harshness and the demands of school and work, when I look back I remember long hours and days to dream happy dreams, to wander at will and to enjoy innocent fun and pastimes. Life seemed less complicated then and young and old were satisfied with small, simple pleasures.

I have fond memories of all with whom I shared those long ago days at school and I still remember them as they were then.