aka "Seán na Sagart (John of the Priests)" 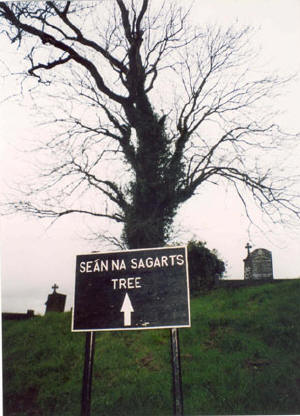 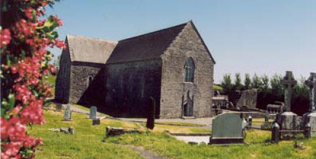 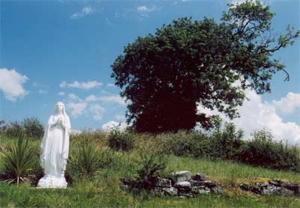 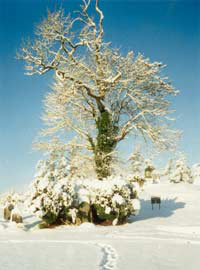 zoom
A Winter Scene of the infamous Burial Plot
www.ballintubber.ie

Our most hated man, Mr. John Mullowney, was born in Derrew, Ballyheane in 1690. He started down the criminal path at an early age. He was a violent man, a horse thief and a drunk with absolutely no morals; in other words, a truly despicable character. At the same time, that John was caught and headed towards the hangman’s noose, Catholic priests were being required to sign what was called “The Oath of Abjuration”. Taking the oath, meant agreeing that Queen Anne, a protestant, was the Supreme Head of the Church of England and Ireland and thereby denying the rights of Catholic claimants to the crown. Any cleric that refused to adhere to the 1709 Penal Act faced death or deportation.

What did this mean for John? The High Sheriff of Mayo, a Mr. Bingham (another not so nice guy) recognized John’s low character and offered him a way to avoid hanging by agreeing to hunt priests who didn’t take the oath. He agreed to bring in a minimum of 1 head/year and thus became known as “Séan na Sagart” or “John of the priests”.

This was a lucrative business deal for Mullowney as he could get upwards to £100 depending on if the capture was an Archbishop, a priest, monk, Jesuit, hedge school teacher or a priest in training. His purse grew as did the number of Catholics who hated him for following such an odious profession.

Among the protestant gentry however he was a welcome guest and became a regular visitor to the Bingham’s at Newbrook House in South Mayo. Reputably the heads of his priest victims were stored in its cellar. Another disposal site was a lake in the parish of Ballintubber (now known as Loch na gCeann or the Lake of the heads). The murders were reported to affect Mrs. Bingham, who believed her carriage horses were cursed and made her husband promise that Mullowney would not be allowed to murder any more priests. Unfortunately, this didn’t stop Mullowney.

Of an estimated 2,000 priests, only 23 took the oath showing that the majority of the population remained Catholic. Mass was celebrated, but conducted at secret locations with the priest in disguise so the congregation could honestly say they didn’t know who had said the mass. Someone kept watch for soldiers and an escape route was always at hand.

Manipulated His Own Family

Mullowney wasn’t above manipulating his own family in achieving his kills, he convinced his sister Nancy Loughnan, a widow and a devout Catholic, that he was gravely ill. He told her to call for the priest, for he desperately needed to confess his sins before facing his maker. The priest, a Father Kilger, was quickly sent for, as he knelt by the bed, Mullowney drew a hidden knife and stabbed him to death.

Next on the list was a Friar Bourke, nephew to Father Kilger, who was sure to attend Father Kilger’s funeral. The friar turned up as expected and took his place as a pallbearer; he wasn’t stupid though because he had brought 2 bodyguards with him for protection, a John McCann and a Fergus McCormick. John McCann had a personal stake as his relative, a Father Higgins, was one of Mullowney’s kills. As the funeral procession reached Ballintubber, Seán na Sagart sprang from behind a bush and grabbed the friar crying ‘tá mo chíos íochta agam’, (my rent is paid). The friar broke away and ran towards the Partry mountains.

This tale is firstly all about that pursuit, which is said to have gone on for an entire day, up one mountain and down another, through fields and into streams.

Wherever, the description leads, it eventually ended in a wood near Partry, where the exhausted friar and the priest-hunter confronted each other. In the struggle the friar stabbed Séan with his own knife and then McCann who had caught up with the pair grabbed the knife and finished the job so ending the career of Séan na Sagart, priest hunter.

The second part of this tale that has legendary status, is the burial of Mullowney. He was so hated by the people of County Mayo, that after he was buried at Ballintubber Abbey, they dug him up and threw him into the nearby Lough Carra. Friar Bourke ordered them to retrieve the body and had it reinterred, this time in unconsecrated ground. It is said that the locals had the last word though, as they buried the corpse facing north (where the sun never rises).

An ash tree was planted over the grave, now known as the hangman’s or Seán na Sagart’s Tree because of the limbs bending down and it never bearing fruit. To add to it all, 150 years after the burial, the tree split in half.