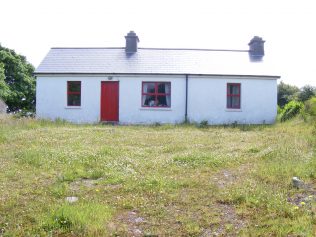 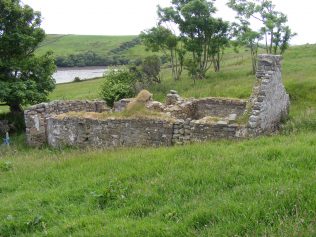 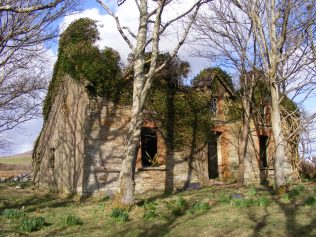 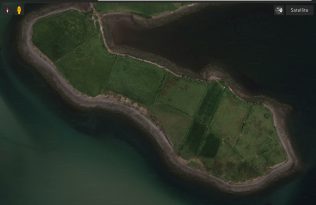 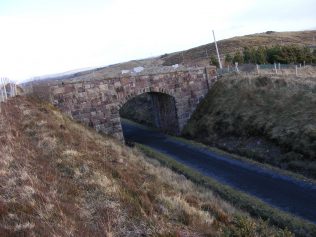 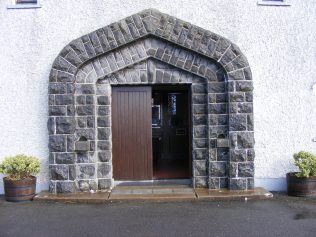 áDue to Oliver Cromwell’s Transplantation Law (1654-1660) hundreds of Catholic families were evicted from their homes in Donegal and West Ulster and banished to Mayo. Some of those families ended up in Burrishoole Parish among them my mother’s people- a McLoughlin family from Inisowen.

On visiting the Folklore Collection in UCD I came across an article collected by Padraig O Morain. In Manuscript 1206 p47 I found an article narrated by my grandfather, Pat McLoughlin , Roskeen N., carpenter and stone mason. He was known locally as Pat Tooreen (a townland east of Mullranny where a Pat McLaughlin had a Tithe of 8s). Padraig O Morain’s handwriting was familiar to me, being a past pupil of Knockloughra N.S. where he taught. My grandfather had got his history from his own father, James who was my great grandfather. I will take up the narrative from here.

“My 3rd great grandfather also a Pat McLoughlin (b.abt.1760) was a kind of travelling vet who castrated animals and made up sheep dip (from tobacco) and doses for cattle and horses. He serviced the estates of landlords such as Bourke of Carrowkeel, Crossmolina, Blake of North Galway and John McLoughlin Esq. of Newfield House,Tiernaur (O’Moráin) who had bought the estate in 1784. He was not a relation. Pat was at least 40 years of age when he settled down in Roskeen South (the most southerly part of the townland), his journeyman’s life as vet was over, he married c.1800 (wife unknown). His house was at the narrowest part of the isthmus and he had at least two sons”. (O’Moráin)

One son Thomas, inherited the home place and “we find that his brother Pat who was my 2nd great grandfather was married to a Hoban woman in the Paddock an area east of Knockloughra School the night of the Big Wind. O’Moráin records thatJames, his son was seven years old that night in 1839 when the roof was taken off their house”. He had a younger brother called Mairtin. Soon after that the family returned to Roskeen South, to another house at Lios Mor that was dug into the ground to protect it from the wind. James and Mairtin were first cousins of young Tommy McLoughlin who lived in their grandfather’s house nearby. That Tommie with his wife and family went to America in the Tuke Migration (1882-1883).

The McLoughlin’s in Roskeen South were fairly well off before the famine, working as carpenters for landlords and rearing horses for sport and transport and also herds for a local grazier called Hillas who lived at Maryland, Carheenbrack. That house was knocked later and the stones used to build a house for George Hope – a strong tenant farmer who took the townland of Knockloughra in the 1860’s. Family lore has it that the McLoughlins “beggared themselves”, during the famine years (1845-1848), making coffins and burying the dead.

“All the tenants left (Toin) -the most southerly part of South Roskeen because it was a place where potatoes rotted very easily”. (O’Morain) In 1851, John Mcloughlin, Esq. was sold out in the Encumbered Estates Court and his lands in Newfield from Knockloughra School to Tiernaur Church were cleared when Henry Smith Junior from Co. Meath bought the McLoughlin Esq. Estate. “Our McLoughlins and a McCormack family would be left in possession if they paid the rent of the whole place”.(O’Morain) Pat and Mairtin (his son) remained living in Lios Mor. But in 1858 his son James and Jackeen Moran (Smith) a neighbour who was also a blacksmith, had taken 78 acres between them in Roskeen North. At this stage, James was married to Mary Moran (Fairley) from Roskeen South. He had become a drover for his landlord driving his stock from Mayo to his Meath lands.

My mother, born 1913, remembered her grandfather James for two reasons. (i), the night he grabbed her young brother, who fell over the fire guard into a hot fire and stuck him in a bag of flour to cool down, (2) because of a famine pot he had on his farm, which was used in the 1920s for washing blankets in summer. At first when they were young they lived in the old thatched house, which had a Caileach in the kitchen. Their new slated house was built beside it on the top of a hill, but first outhouses were renovated to live in while the old house was knocked to provide stones for the new building.

Pat Mcloughlin, my grandfather was born on the 17th March 1873. He was the youngest of six siblings. He attended school in Carheenbrack national school. Then as a young boy he worked for a time as a shop boy in Sweeneys of Achill Sound and in Careys of Newport. He spent a short time in Scotland and brought home a violin, which ended up with my mother. In 1904 he married Bridget Connolly from Ochilly. A herd’s daughter and sister of Jack Connolly, who was a member of Michael Kilroy’s Flying Column. The laying down of the Westport to Achill railway line in 1890s, gave much opportunity to local young men, learning a trade in building.

My grandfather trained as a stone mason and carpenter with the Railway Company and continued to work for them for twenty years; sometimes as far away as Castlerea. The first house he built was his own. The demand for houses was slow in the 1920s because money was scarce. When the Rural Housing Grants were introduced in the 1930s house building took off. At that stage three of his sons worked with him and two more joined the business as they came of age. At its peak he was building houses from Achill to Kilmeena. When the war started in 1939 timber could not be imported and house-building finished almost overnight. My grandfather’s business was gone and his sons looked to the Railway for work. At the end of the war five sons found work there and the youngest was working on the farm which was extended in the good times. He himself did house repairs and farmed. His wife died in 1945. The building trade followed down in the family to this day.

He was appointed as a Peace Commissioner for many years. His Catholic Faith was a great solace to him in rearing a large family. My mother often said that after the Rosary at night before bed-time he gathered his family around him and read them a story out of Butler’s “Lives of the Saints”. My only memory of my grandfather is watching my mother and himself through the parlour window, as they had a quiet chat over a cup of tea. He was after cycling from Newport where he was working on the steeple of St. Patrick’s Catholic Church. This was his last assignment getting ill while working there. He died on the 8th December 1948 and is buried in Killeen Cemetery Newport. Ar dheis De go rabh a n-anam dilis.