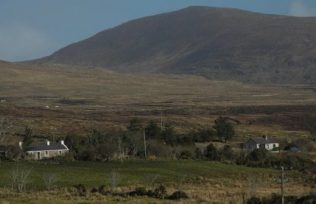 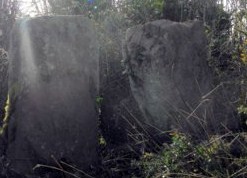 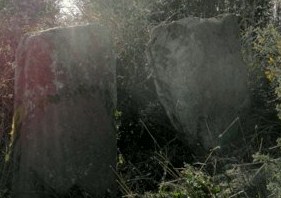 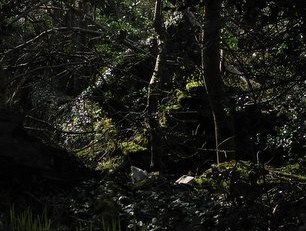 One of the neighbours I particularly knew and liked when I was a child was Mary Berry, who was born in 1876. Mary and her son Tom lived in a thatched house by the edge of the river, in Rossgalive, near Mullranny. Their home was hidden from the main road by a hill, on which stood two ancient ‘standing stones’. In the more enlightened world of today, Tom would be referred to as special needs – then he was just considered to be a little odd. Mary was widowed at a young age and left to bring up her two children in abject poverty, all by herself. She was already in her eighties when I first knew her, and as there wasn’t a proper road to her house, getting out for a view of the country side involved climbing up a stone ditch and making her way to the top of the hill, where she stood leaning on the standing stones for support, as she viewed the surrounding countryside.

Chatting with Mary & Visiting her House

We would call on our way from school, or often ran up to where she stood, to chat and to see if she needed anything. She used to flick the ponytail I wore at the time, referring to it as a “filly’s tail”, the gender difference was lost on me back then. As she got older we called to her house, where the windows were tiny; she always wore black clothes, so it took time even for our young eyes to adjust and to see Mary sitting in the corner beside the fire, that she always referred to as the sparkeen – “Come up to the sparkeen” she would say. They had no means of saving turf, and relied on the kindness of neighbours to bring them a few loads to keep the fire going.

Huge quantities of very beautiful wild Irish roses cascaded over the old stonewall opposite her door and were in total contrast to the darkness of the house within, yet I remember her welcome, cheerfulness and generosity of spirit, despite her very hard life, and the lonely days she now spent alone.

Getting Shopping for Mary

She had a list of -‘commands’- she called them – which she needed from the shop and a reason why each was wanted. “A poundeen of butter because the last poundeen is gone”, “A graineen of tea, because I like me sup of tea” “Cigarettes for Tommie, because they’ll be no house in it if Tommie hasn’t fags” and so it went on. Every few weeks my older sister, would get off school early on a Friday, in time to get the three o’clock bus, and take the ‘wet’ battery for her radio into town to get it re-charged.

Her daughter May worked as a priest’s housekeeper and came to visit her whenever she could. May brought her cakes, biscuits and oranges, which she kept in a big trunk – I always thought of it as her treasure chest and she generously shared her treasure with us, when we visited. It was a real treat, as cake and oranges were a bit thin on the ground in nineteen fifties Ireland.

About fifteen year ago my sisters and I went to look at the remains of the old house. The thatched roof had collapsed completely and underneath it lay the old dresser and its meagre contents. We found a few old dishes and plates and brought them home as mementos. The iron bed was there amongst the rubble with a pair of Tom’s trousers still hanging on. Briars had choked the wild roses; the river still gurgled by, making its way over the rocks and into the pools, where long ago Tom had made basket like contraptions to catch the salmon as they swam upstream. Despite his “oddness”, it was described as a very clever invention, the extra nourishment from all the salmon he caught, was invaluable to an otherwise basic diet.

We never saw Tom when we called in; he was in touch with the vibrations of the earth and heard our approaching footsteps in time to make his escape. Fr. Moran, the then curate, made several calls in an attempt to get Tom to go to Mass, but could never find him in; he eventually crept very silently and did catch him. I’m not sure what tact he used, but after that, Tom did start to attend Mass and even occasionally went for a couple of pints.

Mary ended her very long, deprived and hard life in what was then known as the County Home, and during her twilight years, looked forward to getting the letter and five pounds, which was what one received then from the President, if you survived for a century. Sadly, she went to her eternal reward just a few months shy of her one-hundredth birthday.