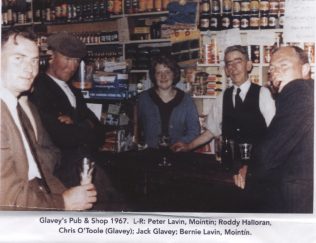 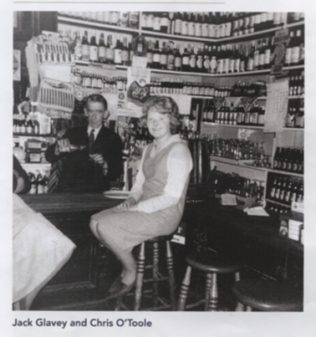 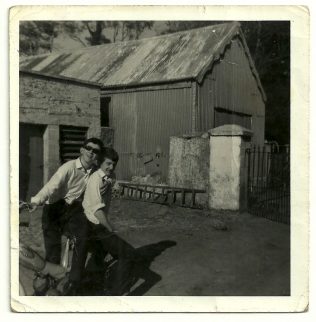 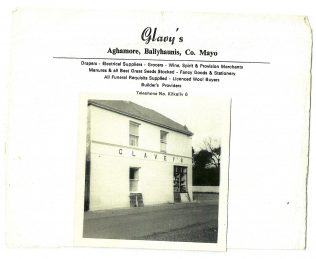 Recently I got thinking about the enormous changes that have occurred in rural villages and towns all over Ireland, with the on-going closures of so many shops, pubs, post offices and so on. This decline has coincided, of course, with the rise of supermarkets, off-licences and large international chain stores, for retailing food, clothing and hardware etc. My mind began to turn to our own bar and grocery business in Achadh Mor during the 1950’s and 1960’s

‘WOOL, WOOL, WOOL’ was the heading that my father Jack, Lord have mercy on him, used to put in the Western People during the weeks that the sheep were been shorn. It helped bring a bit of business. When the farmer arrived with his wool he got paid so much per pound right away and he might end up buying a few provisions or groceries and most of them certainly would have a few ‘jars’. In fact the odd one might take ‘a few too many’ and it would end up that you’d drive them home that evening and they’d return next day to pick up the horse and cart or whatever mode of transport they had used.

Every kind of wool

There was greasy wool, washed wool and every kind of wool in-between and indeed on occasion there might be bits of sheep dung or whatever still tangled up in the fleece to add extra poundage! It could be valued at a shilling a pound and every shilling was important. The part that I hated about that particular work was when the wool had to be put into big bales and packed. They used to sell it to a gentleman called John M. Joyce of North Brunswick Street, Dublin. The Joyce family came from Connemara originally. We used to do brisk business then. They’d come from ten, even fifteen miles radius with their wool.

Greased up and down

We’d have to pack the wool in the top part of a granary-style barn and there would be twenty or thirty fleeces in a pile and my task was to literally jump in on those fleeces. I’d be jumping around on them in order to pack them tightly to make room for more as they were very bulky by their nature. After a day spent at that work you’d be covered in grease from head to toe and sweat streaming down too because the heat generated by the wool was terrific. All your clothes would have to be placed in the wash after this operation in order to get the grease stains out. I don’t know where my brother John disappeared to during this exercise but I don’t remember him ever greased up in the bales of wool.

When the big articulated truck arrived to collect the wool it was an advantage for loading to have them upstairs in the granary and when the driver reversed into the edge of the steps you could roll the fleeces directly down on to the lorry. Forklifts weren’t ‘on the go’ in Achadh Mor in these days! It was all labour-intensive manual work.

Another exercise that I didn’t enjoy much was coal bagging. A big lorry load of coal would arrive from McKenzies of Dublin, with maybe fifteen or twenty tons on the load. The big heap of coal had to be filled into ten stone bags. There wasn’t any talk of health and safety enforcement at that time and you’d end up black as a coal miner at the end of the day with plenty of dust in the throat and eyes as well. Again this work was part and parcel of the 1950s/1960s when most stuff was delivered in bulk.

The same packaging operation was involved with other things as well, for instance blue stone and washing soda for the potato spray. Those came in ten stone bags and had to be refilled into smaller bags at the appropriate weights of one pound or two pounds etc. Tea and sugar also came in bulk and though the procedure wasn’t as difficult as the coal, it all took time and a considerable amount of patience.

The day of the week that stands out most in my mind is Thursday, when we were supposed to close at 1.00 o’clock. However, often it didn’t work out like that. Some of the ‘cuter’ lads would arrive at about half twelve and delay over their pint and call for another shortly after the ‘official’ closing time and they’d remain on ’til 3pm or 4pm. Thursday was special also because the Western People newspaper was published on that day and it came usually in the afternoon so you’d probably stay open until it arrived. Herrings also were delivered on a Thursday afternoon because of Friday church abstinence from meat. As a result on a Thursday evening or night there would be a good gathering of people in the pub for the dual purpose of buying the Western and the Friday dinner. It was good for business at the time. Some might buy six herrings, others two dozen and there was one man (who must remain anonymous) who from time to time bought ten dozen herrings! How he kept them fresh over the week I can’t figure out but I think sometimes fish were fed to animals and fowl also.

Women on the beer

When I was a young lad you’d never see a woman taking a drink in the bar. It wasn’t politically correct. We had a dining-cum-sitting-room off the bar itself. Perhaps after a funeral some women might come in but they were always ushered into the side room and would sip on a sherry or a Babysham, which became very popular due to the early ads on television. You’d never see a woman sitting on a bar stool, until the night an American couple who rented Conboy’s house came in. Not only did the wife sit up at the bar but she started to drink pints of Guinness. It created a lot of talk and comment.

At Christmas time many people ordered extra provisions for the season and we’d set aside big cardboard boxes to pack those Christmas orders-large tins of fruit, pots of jam and marmalade, quantities of currants, raisins and sultanas, oranges and lemon peel, some minerals and refreshments. We’d then make sure to deliver those big ‘hamper style boxes in good time for Christmas.

Even apart from Christmas time, buying in bulk was the norm, unlike to-day where smaller amounts are standard, such as a few slices of this or that. Jams and marmalade are usually in 2lb. pots. Bacon was bought in large chunks and often large sides of bacon would be bought by families that didn’t kill their own pig. Ham or corned beef was always sold by the half pound and never by the number of slices.

Christmas also brought nights of card playing for ducks, drakes and turkeys…and pigs’ heads were very popular too. The card game always drew a crowd. You’d have ten single hands playing at a time. Usually it worked out at a half crown a game and tension could be pretty high, If someone was caught reneging there would be ‘red cards shown! There were several handy card players.

We sold paraffin oil also and in the early years especially, there was big demand for it for cooking and lighting in the home and in later years to an extent, for lighting in the stables and oil heaters which became more common. Near pub closing time gallons of oil had to be filled.

We did various kinds of feedstuff. Clarendo, Pollard and Indian Meal were very popular for animals. Most people referred to Indian meal as “injun” and as a young lad I thought it was related in some way to a car engine!  Odlums and Ranks flour were the two main brands we sold and most families tended to be bigger then and usually bought their flour by the hundred weight or half cwt. bags. Dairy nuts and calf nuts and beef nuts became popular also and I think that Paul and Vincent were the chief suppliers of those. Fertilisers were delivered by lorry from Cawleys of Sligo. At that time a lot of the fertiliser or ‘special’ as we called it potato manure came in big jute two cwt. bags. It wasn’t exactly ideal for someone with a weak back or gammy shoulder.

Like many shops at the time we also carried a range of ‘medicines’ such as Beechams Pills, Cullens Powders, Syrup of Figs, Castor Oil, Cod Liver Oil Horse Embrocation, Milk of Magnesia and Sloans Liniment. Of course Panadol and Bisodol and other modern products have replaced many of those, even the very word embrocation and liniment are rarely heard now. It’s interesting, however, that Horse Embrocation has made a big comeback in recent years and is used widely for Sports and muscle injuries, though now re-labelled as Horse Balm and in a modified form of course.

Roddy Halloran was a special character who worked for us for years. He worked on the farm and in the yard and stores and he monitored the comings and the goings to the shop and the pub. Roddy did enjoy his few pints at night but he was very reliable and always showed up for work every morning without fail. Roddy wasn’t just an employee, he could be said to be a friend of ours, almost a family member.

We had another extra family member also. A first cousin of ours Ollie Brennan from Claremorris, came to live with us and stayed on when his mother was ill. He was a very likeable lad and we enjoyed having him with us. Lots of people mistook him for our brother as he was with us everywhere, at matches and so on.

We usually had a shop assistant over the years. The first one I remember was a man called Tommy O’Malley who came from near Westport. The first female assistant I can recall was Margaret Grodan of Foxford who worked for us for a number of years and later married Mick Lyons of Carrownedan and settled in Ballinacostello and she actually ran her own business there in what used to be Joe Byrnes. She was followed by a girl from Hollymount called Gertie Sheridan and then there was a girl from Ballintubber in Co. Roscommon called Francis Egan. After that Chris O’Toole from Scardan, Claremorris was with us. Later on she also was married locally to Seamus Glavey of Lar a’ Lae. I think that Chris was the last of the shop assistants before we sold the business in 1974.

History of the Business

John Glavey married Kate Hunt and they operated a Bar and Grocery plus a large farm from 1880 onwards. They had one daughter Mary and three sons-William, Bernard and Jack. Two sons immigrated to the United States, Mary married but died in childbirth with her first child. John and Kate continued to operate the business until John died in the early 1920’s. Then Jack and his  mother Kate continued to operate the business. Jack married Margaret Dixon a nurse from Athena, Claremorris in 1947 and they continued with the business until Kate died in 1961. Jack and Margaret operated the business until it was sold to James Gilmore of Meelick, Swinford in 1974. It has been sold twice since first to Tom Glavey of Lauralea, Aughamore and, more recently to William Moran of Woodfield Aughmore. Jack and Margaret had two sons who did not wish to continue with the business, Jack died in 1974 just after the business was sold and Margaret died in 2001.