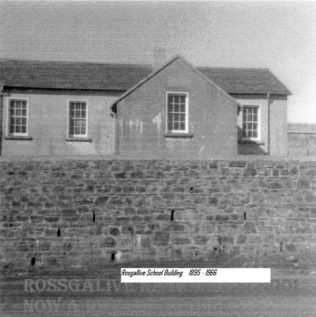 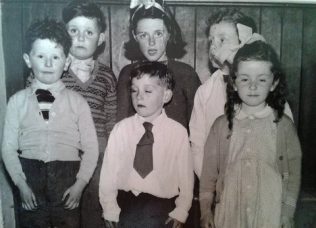 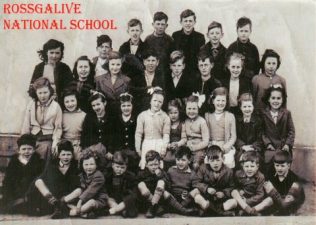 Keen to get started

My first memories of school are of events before I even get there if that makes any sense? As a toddler, the sound of pupils making their way home, especially on a calm summer’s evening, was intriguing. My father referred to this ‘racket’ as ‘scholars coming through the wood’, which was doubly intriguing to a 3 year old. Having been cooped up all day with limited or ‘out of bounds’ play space, the walk home was a chance for everyone to have some fun and be as loud outdoors as they had to be quiet within. With very few or no cars on the roads then, it was perfectly safe to dawdle and play. With a sister and two older brothers already in attendance, I desperately wanted to join in the fray and so, for all the wrong reasons, I couldn’t wait to start school.

Unfortunately, after such a promising start, my recollections take a bit of a nosedive. Memories include Mrs. Chambers making tea on the open fire, the tuning fork she used to get us singing in the right key, spending what seemed like a huge amount of time on multiplication tables and the small pink covered catechism. I remember fretting for days, weeks even, because I just couldn’t get the concept of the Holy Trinity – 3 persons in one God is surely a mystery to a child. That it was a mystery as well to the adults in my life didn’t help, especially since I was of an age where I believed that adults knew everything.

Needlework class was a welcome respite from ‘times tables’ but while the tacking and running stitch posed little problem, backstitching, which was supposed to be as straight as a die, had a way of zigzagging its way across the piece of cotton on which I worked and had to be ripped out so often that the piece of fabric would be practically in shreds and my fingers sore. I don’t know what the boys did while we girls sewed – geography maybe – but it has often occurred to me in my adult life that they should have been at least drafted in for the lesson on sewing on a button, they being the ones wearing shirts, after all.

A Less Pleasant side of Primary School

A catalogue of memories wouldn’t be complete without mentioning the not so nice ones too – the less than hygienic bathroom facilities for instance and the playground fights among some of the boys. While many of these sparring matches were probably normal behavioural patterns for youngsters, the benefit of age and hindsight has me thinking that there was no doubt an element of bullying attached to them sometimes.

These fights however, pale into insignificance when viewed alongside the terrible physical abuse which was the standard method of punishment for the time and was doled out with some regularity, mainly by visiting disciplinarians, over the years that I and those that went before me spent at school. This violence was horrific to witness, let alone be subject to. Often for little more that a petty misdemeanour or normal childish pranks, or because of one’s place of birth, the most awful hidings were administered. One can only hope that the victims of this abuse, who are no longer with us, are resting in peace and that those who are still living have been able to deal with and work through the immense hurt inflicted on them as children. For the perpetrators too (all now deceased) who surely must have been victims themselves in their youth, because how else might one explain their behaviour as adults, one would wish that their souls are more peaceful in death than they were in life.

Our Alternative Play area and High jinks in the schoolyard

There were many blessings, however. What we lacked in play space around the school was more than compensated for by the Sandgate, probably the most scenic football/play ground in the world. With two stones at either end as goalposts, matches played there had as much passion and intensity as those played at McHale Park. There were never proper teams – those that showed up played. The arrival of midges would signal the end of the game and of course an alternative venue had to be found if there was a high tide.

We were blessed also in having a few Kamikaze fellow pupils –the gladiators of their day- who would treat us to a daring balancing act while walking along the school wall. This was completely against school rules, of course, which made it even more exciting. One in particular always embellished his act with high drama, pretending to fall from time to time. I remember looking on as a child and thinking that he would surely die young. Happily, he celebrated his 60th. Birthday recently and happier yet, he is still as mad as a hatter.

Downsizing to One Teacher

I was in the ‘master’s room’ for 2nd. Class, it being the year that Mrs. Chambers left and all of us were grouped together. Mr. Walsh retired at the end of that school year- 1965- and my last class in Rosgallive was 3rd. with Miss McGreal as teacher. What I remember most from that time is that whenever there was a knock on the door and it could have been anyone – the priest, the cigire or a neighbour – as Miss McGreal left the room, all of us, led by John Murray, would start to sing the Jewel Akens hit of the time, Georgie Porgie, that began :“ Hey Baby It’s Georgie Porgie, Knocking On Your Door”. Mary Jo McGreal would marry George Sweeney in the following years.

108 years of our Local School comes to an end

On the last day in Rosgallive School, Miss McGreal brought sweets and we had a little celebration. I wasn’t yet 9 yrs old, so I don’t think I fully understood that school the following year would be totally different.

On a footnote, upon starting in Mullranny School we were all put back a class – that is we were all made to repeat the year we had just completed in Rosgallive. At the time I didn’t wonder why but I guess that Sr. Perpetuo was taking no chances with the ‘country cousins’ and was ensuring that her standards were met by the time we got to 6th Class.

As we all attend the University of Life it seems fair to say that our formative years in Rosgallive School have served us well. We left with a good grasp of the 3 R’s – reading, writing and arithmetic – poetry, Irish, a few verses of ‘Rody McCorley’ and much more. While our ‘backstitching’ mightn’t be any straighter now than it was then, we are able, to this day, to rattle off 9 x 8 or 8 x 7 in a heartbeat.

I write this in gratitude to all who helped in my early years, to prepare me for the ones following.