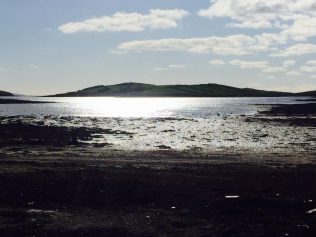 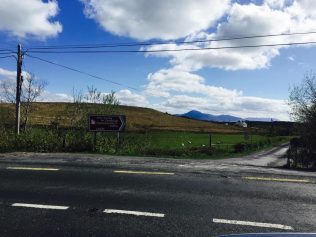 zoom
Gortfahy, the village where Bridget was living when she wrote her letter
Author Personal Collection 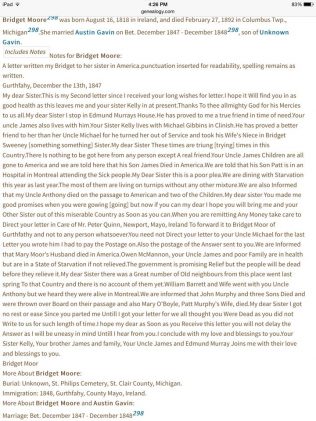 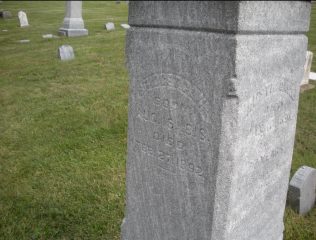 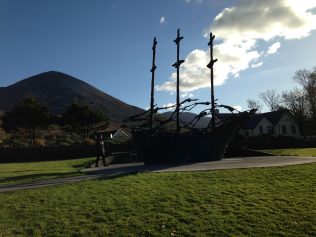 Clynish (Clinish Island) is in the Parish of Kilmeena and Barony of Burrishoole. It is one of many Islands of Kilmeena and Newport in West Mayo. The Islands are in Clew Bay and lie in the shadow of Ireland’s Holy Mountain, Croagh Patrick which is known affectionately by locals as “The Reek”. Pre-famine these Islands were highly populated by Islanders who were farmers and fishermen.These people travelled to the mainland for Church Services, Markets etc., In recent times many of the Islanders have moved and settled on the mainland, though some remain on the larger ones like Innisturk, Clare Island etc.,

The familes living on Clynish in the 1850’s were Moore’s, Gibbons and Malleys. In 1901 and 1911 census there were only Moore and Gavin families living there. They shared the Island for many years. In present day the island is owned by the Gavin family.

The letter which was written by Bridget Moore and kept by her family in the US described the desperation of the people left behind in the wretched countryside of Mayo as the famine of 1845-47 wiped out families and forced many to emigrate. This letter has been transcribed by Bridget’s ancestors and is a vivid and poignant record of the suffering and devastation of our forefathers, and the impact on families as they were separated from loved ones.

Bridget was the daughter of Joseph Moore. She was born in Clynish Island but was separated from her family and was living in Gorthfahy (Gurthfahy) with a relative at the time of writing her letter. She mentions another sibling living with a family, Gibbons still on the Island, so it is possible that her parents may have already succumbed to the famine.Her letter was written in 1847, she emigrated shortly after this letter.

This beautiful area of St. Clair County was heavily populated with Irish farmers, all of these families intermixed with each other growing up, and gave me the big, wonderful Irish family that I have.

This is my second letter since I received your long wishes for letter.  I hope it will find you in as good health as this leaves me and your sister Kelly in at present. Thanks to thee almighty God for his mercies to us all.  My dear sister, I stop in Edmund Murray’s house.  He has proved to me a true friend in time of need.  Your uncle James also lives with him. Your sister Kelly lives with Michael Gibbins in Clinish. He has proved a better friend to her than her uncle Michael for he turned her out of service and took his wife’s niece in Bridget Sweeney (something, something).

Sister, Dear sister these times are triung (trying) in this Country.  There is nothing to be got here from any person except a real friend.Your Uncle James children are all gone to America and we are told that his son James died in America.  We are told that his son Patt is in a hospital in Montreal attending the sick people.  My Dear Sister this is a poor plea.   We are dining with starvation this year as last year.  The most of them are living on turnips without any other mixture.  We are also informed that my uncle Anthony died on the passage to America and two of the children.  My Dear Sister, you made me good promises when you were gowing (going) but now if you can my dear I hope you will bring me and your other sister out of this miserable country as soon as you can.

When you are remitting any money take care to direct your letter in care of Mr Peter Quinn, Newport, Mayo, Ireland, to forward to Bridget Moor of Gurthfahey and not to any person whatsoever.  You do not direct your letter to your uncle Michael for the last letter you wrote him I had to pay the postage on.  Also the postage of the answer sent to you.

We are informed that Mary Moor’s husband died in America.  Owen McMannon, your Uncle James and poor family are in health but are in a state of starvation if not relieved.  The Government is promising relief but the people will be dead before they receive it.  My dear sister there was a great number of old neighbours from this place went last spring to that country and there is no account of them yet.  William Barrett and wife went with your Uncle Anthony but we heard they were alive in Montreal.

We are informed that John Murphy and three sons died and were thrown overboard on their passage and also Mary O’Boyle, Patt Murphys wife died

My Dear sister  I got no rest or ease since you parted me, until we got your letter for we all though you dead as you did not write to us for such a length of time.  I hope my dear as soon as soon as you recieve this letter you will not delay the answer as I will be uneasy in mind until I hear from you.  I conclude with my my love and blessing to you.  Your sister Kelly, your brother  James and family, your Uncle James  and Edmund Murray joins me with their love and blessings to you.