Killala Bay Harbor Pilot during the Year of the French, 1798 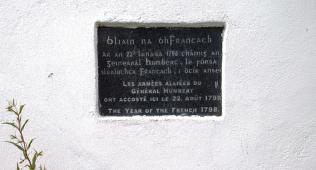 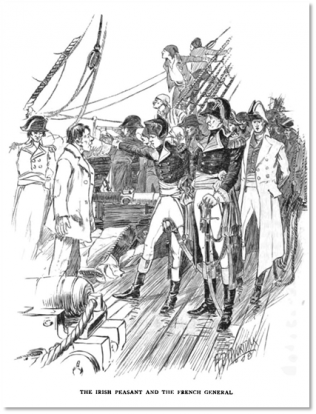 In the late 1700’s, influenced by the works of Thomas Paine and the French Revolution, The Society of the United Irishmen was formed with the objectives in repealing the Irish Penal Laws; giving more rights to the native Irish and to Roman Catholics. By 1794, the United Irishmen were put under pressure, and many members fled to the continent and to France.

On the morning of August 22nd 1798, Matthew Dominick Loughney [Maitiú Damhnaic O’Lachtna], or “Big Matt” as he was known, was fishing off of the coast of North Eastern county Mayo. Big Matt was from Beltra in Lacken Parish, living behind the residence of Father Hugh Conway, the local catholic parish priest.

As he fished, he spied a frigate flying the Union Jack, which was not uncommon as British Ships had landed at Kilcummin Harbor a few years earlier. When he was hailed and asked to climb on board, he noticed that not all was as it seemed to be.

When Matt came alongside the leading vessel, and before he encountered O’Keon, he was asked from the deck if he was a catholic. Not perceiving anything remarkable or strange in the question, Matt answered ‘yes.’ He then enquired as to what cargo the ships were carrying and was told ‘frogs’, and it was only when he boarded that the irony of the answer fully dawned on him. These were not English, but the French coming to help liberate Ireland, as long foretold by stories and songs. This story was told to Stephen Dunford by a local historian, the late Jack Munnelly of Ross.

Another version of this tale appeared in an article titled “The French Invasion of ’98” in The Western People on Saturday, April 30, 1904. Father Henry O’Keon recognized Matthew Loughney, as he knew all of the old fishermen in his youth. They discussed the landing and Big Matt advised against landing in Killala but rather landing in Kilcummin so as to maintain an element of surprise. [1]

The French headed to Kilcummin Harbor and started to unload their cargo, Father O’Keon helped raise men from the local villages. The band of French and Irish quickly captured Killala and Ballina. They continued down to Castlebar, where they routed the English. That battle was known as the “Races of Castlebar” as the English fled in an uncontrolled retreat. General Humbert headed east, towards Dublin. Eventually, Humbert decided to engage the English at Ballinamuck. Humbert faced overwhelming numbers – General Lake was close with 14,000 men and Lord Cornwallis was on his right with 15,000. The French surrendered and were taken prisons. The 1,000 or so Irish fighters attempted surrender, but were shown no mercy. Approximately 500 Irish were slain on the battlefield, and a further 200 were capture and eventually all were hung for treason.

An account of the French landing contained in the adventures of “Maurice Tiernay, first published as a serial in ‘The Dublin University Magazine,’ starting in April 1850. This was latter collected in to a novel “Maurice Tiernay – The Soldier of Fortune” by Charles Lever, in 1861. http://www.gutenberg.org/ebooks/32425

“The morning of the 22nd broke splendidly—a gentle breeze from the south-west slightly curled the blue waves, and filled the canvas of the three frigates, as in close order they sailed along under the tall cliffs of Ireland. We were about three miles from the shore, on which now every telescope and glass was eagerly directed. As the light and fleeting clouds of early morning passed away we could descry the outlines of the bold coast, indented with many a bay and creek, while rocky promontories and grassy slopes succeeded each other in endless variety of contrast. Towns, or even villages, we could see none—a few small wretched-looking hovels were dotted over the hills, and here and there a thin wreath of blue smoke bespoke habitation, but, save these signs, there was an air of loneliness and solitude which increased the solemn feelings of the scene.

All these objects of interest, however, soon gave way before another to the contemplation of which every eye was turned. This was a small fishing-boat, which, with a low mast and ragged piece of canvas, was seen standing boldly out for us: a red handkerchief was fastened to a stick in the stern, as if for a signal, and on our shortening sail, to admit of her overtaking us, the ensign was lowered as though in acknowledgment of our meaning.

The boat was soon alongside, and we now perceived that her crew consisted of a man and a boy, the former of whom, a powerfully built, loose fellow, of about five-and-forty, dressed in a light-blue frieze jacket and trousers, adroitly caught at the cast of rope thrown out to him, and having made fast his skiff, clambered up the ship’s side at once, gaily, as though he were an old friend coming to welcome us.

‘Is he a pilot?’ asked the officer of the watch, addressing one of the Irish officers.

‘No; he’s only a fisherman, but he knows the coast perfectly, and says there is deep water within twenty fathoms of the shore.’

An animated conversation in Irish now ensued between the peasant and Captain Madgett, during which a wondering and somewhat impatient group stood around, speedily increased by the presence of General Humbert himself and his staff.

‘He tells me, general,’ said Madgett, ‘that we are in the Bay of Killala, a good and safe anchorage, and, during the southerly winds, the best on all the coast.’

‘What news has he from the shore?’ asked Humbert sharply, as if the care of the ship was a very secondary consideration.

‘They have been expecting us with the greatest impatience, general; he says the most intense anxiety for our coming is abroad.’

‘What of the people themselves? Where are the national forces? Have they any headquarters near this? Eh, what says he? What is that? Why does he laugh?’ asked Humbert, in impatient rapidity, as he watched the changes in the peasant’s face.

‘He was laughing at the strange sound of a foreign language, so odd and singular to his ears,’ said Madgett; but for all his readiness, a slight flushing of the cheek showed that he was ill at ease.

‘Well, but what of the Irish forces? Where are they?’

For some minutes the dialogue continued in an animated strain between the two; the vehement tone and gestures of each bespeaking what sounded at least like altercation; and Madgett at last turned half angrily away, saying, ‘The fellow is too ignorant; he actually knows nothing of what is passing before his eyes.’”

‘Is there no one else on board can speak this barargouinage?’ cried Humbert, in anger.

‘Yes, general, I can interrogate him,’ cried a young lad named Conolly, who had only joined us on the day before we sailed.

And now as the youth addressed the fisherman in a few rapid sentences, the other answered as quickly, making a gesture with his hands that implied grief, or even despair.

‘We can interpret that for ourselves,’ broke in Humbert; ‘he is telling you that the game is up.’

‘Exactly so, general; he says that the insurrection has been completely put down, that the Irish forces are scattered or disbanded, and all the leaders taken.’

‘The fellow is just as likely to be an English spy,’ said Madgett, in a whisper; but Humbert’s gesture of impatience showed how little trust he reposed in the allegation.

‘Ask him what English troops are quartered in this part of the country,’ said the general.

‘A few militia, and two squadrons of dragoons,’ was the prompt reply.

‘Is there any rumour of our coming abroad, or have the frigates been seen?’ asked Humbert.

‘They were seen last night from the church steeple of Killala, general,’ said Conolly, translating, ‘but believed to be English.’

‘Come; that is the best news he has brought us yet,’ said Humbert, laughing; ‘we shall at least surprise them a little. Ask him what men of rank or consequence live in the neighbourhood, and how are they affected towards the expedition?’

A few words, and a low dry laugh, made all the peasant’s reply.

‘Eh, what says he?’ asked Humbert.

‘He says, sir that, except a Protestant bishop, there’s nothing of the rank of gentry here.’

‘I suppose we need scarcely expect his blessing on our efforts,’ said Humbert, with a hearty laugh. ‘What is he saying now?—what is he looking at?’

‘He says that we are now in the very best anchorage of the bay,’ said Conolly, ‘and that on the whole coast there’s not a safer spot.’

A brief consultation now took place between the general and naval officers, and in a few seconds the word was given to take in all sail and anchor.

‘I wish I could speak to that honest fellow myself,’ said Humbert, as he stood watching the fisherman, who, with a peasant curiosity, had now approached the mast, and was passing his fingers across the blades of the cutlasses as they stood in the sword-rack.

‘Sharp enough for the English, eh?’ cried Humbert, in French, but with a gesture that seemed at once intelligible. A dry nod of the head gave assent to the remark.

‘If I understand him aright,’ said Humbert, in a half-whisper to Conolly, ‘we are as little expected by our friends as by our enemies; and that there is little or no force in arms among the Irish.’

‘There are plenty ready to fight, he says, sir, but none accustomed to discipline.’ “